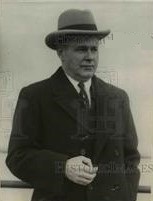 He attended Trinity School (New York City) and graduated (A.B.) in 1903 from Columbia University, where he engaged in college theatricals.[26] He wrote the libretto for ''The Isle of Illusia'', an all-male operetta that included a caricature of Clyde Fitch, of whom Megrue became a close friend.[27]

At Columbia he met, and became friend, of future Broadway actor Ralph Morgan.[1]

Cooper worked with Elisabeth Marbury as a play broker before starting his career as playwright.[28] He had a key role in the Dramatists Guild.

In 1917 he co-produced the first Pulitzer Prize-winner, ''Why Marry?''. The 1921 play ''Honors Are Even'' is Megrue's final Broadway credit; the play was not well received by Dorothy Parker, who said it was sweet, clean, wholesome and... dull.[2] His last work was the 1925 adaptation of ''Venice for Two'' from the French play by Sacha Guitry.

He never married and died on February 27, 1927, in New York City. According to the obituary on ''Variety'', his "affectionate relationship with his mother was epic" and they shared an artistically furnished apartment. He is buried at Woodlawn Cemetery (Bronx, New York) with his mother.

The Roi Cooper Megrue Scholarship is awarded annually to a self-supporting student in Columbia College who, in the opinion of the Trustees, merits the award because of qualities of industry, ambition and intelligence.[3]

The 1913 play ''The Neglected Lady'' was written by Roi Cooper Megrue and produced on Broadway.

The 1914 farce ''It Pays to Advertise'' was written by Roi Cooper Megrue and Walter Hackett. It opened at the Cohan Theatre on 8 September 1914 and ran for nearly a year.[4] It opened at the Bronx Opera House on 20 September 1915 produced by Cohan & Harris. The playwrights substantially rewrote the play for a new production in London by the actor-manager Tom Walls, at the Aldwych Theatre. It opened on 2 February 1924 and closed on 10 July 1925, a total of 598 performances.[5] The 1919 (now lost) silent drama movie ''It Pays to Advertise'' was directed by Donald Crisp and written by Elmer Blaney Harris. The film stars Bryant Washburn, Lois Wilson, Frank Currier, Walter Hiers, Clarence Geldart, and Julia Faye. The film was released on November 23, 1919, by Paramount Pictures.[6][7][8][9] It was remade in 1931 starring Norman Foster and Carole Lombard, and directed by Frank Tuttle.[10]

The 1915 play ''Abe and Mawruss'' (or ''Potash and Perlmutter in Society'') was written by Roi Cooper Megrue and Montague Glass and produced by Albert H. Woods. It opened at the Lyric Theatre on 21 October 1915 and closed in April 1916.[14]

The 1916 play ''Seven Chances'' was written by Roi Cooper Megrue and produced by David Belasco. It opened at the George M. Cohan's Theatre on 8 August 1916. It moved to the Belasco Theatre on 23 October 1916 and closed in December 1916 after 151 performances. It starred Marion Abbott, Charles Brokate, Emily Callaway, Alice Carroll, Frank Craven, Florence Deshon, Hayward Ginn, Otto Kruger, Rowland V. Lee, Harry Leighton, Helen MacKellar, Carroll McComas, Anne Meredith, Lillian Spencer, Allen Thomas, Beverly West. It was adapted for the screen in 1925 as ''Seven Chances'' and in 1999 as ''The Bachelor''. The 1925 silent comedy movie ''Seven Chances'' was directed by and starring Buster Keaton. Additional cast members include T. Roy Barnes, Snitz Edwards and Ruth Dwyer. Jean Arthur, a future star, has an uncredited supporting role.[15] The 1999 romantic comedy movie ''The Bachelor'' was directed by Gary Sinyor and written by Steve Cohen. It stars Chris O'Donnell and Renée Zellweger. The film was also the debut of Mariah Carey as an actress.

The 1916 play ''Under Sentence'' was written by Roi Cooper Megrue and Irvin S. Cobb and produced by Selwyn & Co. It opened at the Harris Theatre on 3 October 1916 directed by Roi Cooper Megrue and closed in November 1916 after 55 performances. It starred Janet Beecher, John A. Boone, Harry Crosby, Stephen Denbeigh, E.H. Dresser, Laurence Eddinger, Thomas P. Gunn, Felix Krembs, George MacQuarrie, Thomas Mitchell, Frank Morgan, George Nash, Edward G. Robinson, Joseph Slaytor, Gerald Oliver Smith, George Wright Jr. The 1917 silent drama movie ''Fighting Odds'' was based upon ''Under Sentence'' and was produced and distributed by Goldwyn Pictures and starring Maxine Elliott. The picture was amongst Goldwyn's first productions as an independent producer. It was directed by veteran Allan Dwan and is a surviving film at the Museum of Modern Art, New York, and Gosfilmofond in Russia.[16][17]

The 1925 play ''Venice for Two'' (from the French of Sacha Guitry) was written by Roi Cooper Megrue.