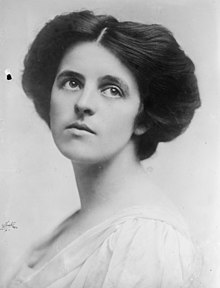 From a conflicted and unhappy childhood, Parker rose to acclaim, both for her literary output in publications such as The New Yorker and as a founding member of the Algonquin Round Table. Following the breakup of the circle, Parker traveled to Hollywood to pursue screenwriting. Her successes there, including two Academy Award nominations, were curtailed when her involvement in left-wing politics led to a place on the Hollywood blacklist.

Dismissive of her own talents, she deplored her reputation as a "wisecracker." Nevertheless, both her literary output and reputation for sharp wit have endured.

Parker met Alan Campbell,[34] an actor with aspirations to become a screenwriter, in 1932; they married two years later in Raton, New Mexico. Campbell's mixed parentage mirrored Parker's; he had a Jewish mother and a Scottish father. He was bisexual—Parker later proclaimed in public that he was "queer as a billy goat".[35] The pair moved to Hollywood and signed ten-week contracts with Paramount Pictures, with Campbell (who was also expected to act) earning $250 per week and Parker earning $1,000 per week. They would eventually earn $2,000 and in some instances upwards of $5,000 per week as freelancers for various studios.[36] She and Campbell worked on more than 15 films.[37]

In 1936, she contributed lyrics for the song "I Wished on the Moon", with music by Ralph Rainger. The song was introduced in The Big Broadcast of 1936 by Bing Crosby.[38]

With Campbell and Robert Carson, she wrote the script for the 1937 film A Star Is Born, for which they were nominated for an Academy Award for Best Writing—Screenplay. She wrote additional dialogue for The Little Foxes in 1941 and received another Oscar nomination, with Frank Cavett, for 1947's Smash-Up, the Story of a Woman, starring Susan Hayward.

After the United States entered the Second World War, Parker and Alexander Woollcott collaborated to produce an anthology of her work as part of a series published by Viking Press for servicemen stationed overseas. With an introduction by Somerset Maugham[39] the volume compiled over two dozen of Parker's short stories along with selected poems from Enough Rope, Sunset Gun, and Death and Taxes. It was released in the United States in 1944 under the title The Portable Dorothy Parker. Only three Portable series—Parker's, William Shakespeare's, and The Bible—have remained in continuous print.[40]

During the 1930s and 1940s, Parker became an increasingly vocal advocate of causes like civil liberties and civil rights, and a frequent critic of those in authority. She reported on the Loyalist cause in Spain for the Communist magazine The New Masses in 1937.[41] At the behest of Otto Katz, a covert Soviet Comintern agent and operative of German Communist Party agent Willi Muenzenberg, Parker helped to found the Hollywood Anti-Nazi League in 1936 (which was suspected by the FBI of being a Communist Party front).[42] The Hollywood Anti-Nazi League's membership eventually grew to some 4,000 strong. Its often wealthy members' contributions (probably not intended to support Communism) were, in the words of David Caute,[43] "able to contribute as much to [Communist] Party funds as the whole American working class".[43][44]

Parker also served as chair of the Joint Anti-Fascist Rescue Committee. She organized Project Rescue Ship to transport Loyalist veterans to Mexico, headed Spanish Children's Relief and lent her name to many other left-wing causes and organizations.[45] Her former Round Table friends saw less and less of her, with her relationship with Robert Benchley being particularly strained (although they would reconcile).[46] Parker met S. J. Perelman at a party in 1932, and despite a rocky start (Perelman called it "a scarifying ordeal")[47]—they remained friends for the next 35 years, even becoming neighbors when the Perelmans helped Parker and Campbell buy a run-down farm in Bucks County, Pennsylvania.

Parker was listed as a Communist by the publication Red Channels in 1950.[48] The FBI compiled a 1,000-page dossier on her because of her suspected involvement in Communism during the McCarthy era.[49] As a result, she was placed on the Hollywood blacklist by the movie studio bosses. Her final screenplay was The Fan, a 1949 adaptation of Oscar Wilde's Lady Windermere's Fan, directed by Otto Preminger. Her marriage to Campbell was tempestuous, with tensions exacerbated by Parker's increasing alcohol consumption and Campbell's long-term affair with a married woman in Europe during World War II.[50] They divorced in 1947,[51] remarried in 1950,[52] then separated in 1952 when Parker moved back to New York.[53] From 1957 to 1962, she lived at the Volney Residential Hotel on Manhattan's Upper East Side and wrote book reviews for Esquire magazine.[54] Her writing became increasingly erratic due to her continued abuse of alcohol. She returned to Hollywood in 1961, reconciled with Campbell, and collaborated with him on a number of unproduced projects until Campbell died from a drug overdose in 1963.[55]

Following Campbell's death, Parker returned to New York City and the Volney residential hotel. In her later years, she would come to denigrate the group that had brought her such early notoriety, the Algonquin Round Table:

These were no giants. Think who was writing in those days—Lardner, Fitzgerald, Faulkner and Hemingway. Those were the real giants. The Round Table was just a lot of people telling jokes and telling each other how good they were. Just a bunch of loudmouths showing off, saving their gags for days, waiting for a chance to spring them... There was no truth in anything they said. It was the terrible day of the wisecrack, so there didn't have to be any truth...[56]

Parker was heard occasionally on radio, including Information Please (as a guest) and Author, Author (as a regular panelist). She wrote for the Columbia Workshop, and both Ilka Chase and Tallulah Bankhead used her material for radio monologues.[57]

Parker died on June 7, 1967, of a heart attack[3] at the age of 73. In her will, she bequeathed her estate to Martin Luther King Jr. Following King's death, her estate was passed on to the NAACP.[58] Her executor, Lillian Hellman, bitterly but unsuccessfully contested this disposition.[59] Her ashes remained unclaimed in various places, including her attorney Paul O'Dwyer's filing cabinet, for approximately 17 years.[60]