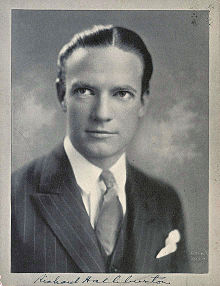 Richard Halliburton (January 9, 1900 – presumed dead after March 24, 1939) was an American traveler, adventurer, and author. Best known today for having swum the length of the Panama Canal and paying the lowest toll in its history—36 cents[1]—Halliburton was headline news for most of his brief career. His final and fatal adventure, an attempt to sail a Chinese junk, the Sea Dragon, across the Pacific Ocean from Hong Kong to the Golden Gate International Exposition in San Francisco, made him legendary.

Halliburton never married. While young he dated several young women and, as revealed in letters to them, was infatuated with at least two. Among those romantically linked to him were film star Ramón Novarro and philanthropist Noel Sullivan, both of whom shared the bohemian lifestyle.[9][10] Halliburton's most enduring relationship was with freelance journalist Paul Mooney, with whom he often shared living quarters and who assisted him with his written work.[11] French police reports, dated 1935, noted the famed traveler's homosexual activity when in Paris at about the time of his planned crossing by elephant over the Alps: "Mr Halliburton is a homosexual well known in some specialized establishments. He is in the habit of soliciting on Saint-Lazare Street." [12]Rue Saint-Lazare is near the station of the same name.

In 1937 William Alexander Levy designed a house for Halliburton in Laguna Beach, California, which is now known as "a landmark of modern architecture."[13] Alexander was a novice architect, a recent graduate of the New York University School of Architecture and close friend of Paul Mooney. Mooney managed the construction of the house, and offered occasional design advice, suggesting the creation of a small pond behind the house which, for its shape and size, he called "Clark Gable's ears." A mutual friend of Levy and Mooney, Charles Wolfsohn (born 1912), a penthouse garden designer, did the flower landscaping. The house, built of concrete and steel and bastion-like in appearance, contained a spacious living room, a spacious dining room and three bedrooms: one for Halliburton, which featured a wall-sized map of the world; one for Mooney; and one for Levy. Because of its position, perched 400 feet (120m) above a sheer canyon, it was called "Hangover House" by Mooney, and this title was cast into a retaining wall on the site. When he first saw the completed structure, Halliburton enthused, "it flies!" Writer Ayn Rand, who visited the house in 1937 when she was still an unknown writer, is believed to have based the "Heller House" in The Fountainhead (1943) upon Halliburton's home.[14]

On March 3, 1939, Halliburton began to sail a Chinese junk across the Pacific Ocean. The Sea Dragon, a gaudily decorated 75-foot (23 m) junk, was made to his commission in the shipyards of Kowloon by cartwright Fat Kau. Emblazoned with a colorful dragon and equipped with a diesel engine, the Sea Dragon was supposed to make its maiden voyage from Hong Kong to the Golden Gate International Exposition in San Francisco (at Treasure Island), where it would dock, become part of the exhibition and take fairgoers on sailing cruises of San Francisco Bay.[18] Halliburton had little practical navigation experience, so he hired Captain John Wenlock Welch as skipper and Henry Von Fehren as engineer. The crew included George Barstow III, a 21-year-old student at Juilliard, Velman Fitch of Minnesota, a world traveler who had been given a ride aboard the Sea Dragon, and Dartmouth College senior Robert Chase. Mooney was also aboard for the journey.

Two other young men from Dartmouth, John Potter and Gordon Torrey, had yachting experience; both of them left the crew after the junk's unsuccessful first voyage and later offered accounts of their experience.[19]

Construction of the junk was marked by cost overruns, delays, and engineering errors, prompting Halliburton to write "If any one of my readers wishes to be driven rapidly and violently insane, and doesn’t know how to go about it, let me make a suggestion: Try building a Chinese junk in a Chinese shipyard during a war with Japan."[18] A trial run revealed its flaws. Nonetheless the expedition set out, and three weeks out to sea on March 23 the ship encountered a typhoon. The junk was last sighted by the liner SS President Coolidge, itself battling mountainous seas some 1900 km west of Midway Island. The US liner received a cheerful radio message from the junk skipper minutes later, "Having a wonderful time. Wish you were here instead of me." The next message was different: "Southerly gale. Heavy Rain Squalls. High sea. Barometer 29.46. True course 100. Speed 5.5 knots. Position 1200 GCT 31.10 north 155.00 east. All well. When closer may we avail ourselves of your direction finder. Regards Welch." That was the last message heard from the junk. At first the Coast Guard at Hawaii delayed searching for the missing ship, possibly thinking Halliburton staged his disappearance as a publicity stunt.[18] Later an extensive US Navy search with several ships and scout planes over thousands of square miles and many days found no trace of the junk or the crew, and the effort was ended. As with Amelia Earhart, many rumors and reports of Halliburton's fate arose over the years, with fans hoping he might yet turn up alive.[18]

In 1945 a 30-foot skeleton of a 150-foot boat of oriental design washed ashore in San Diego California. It was suggested that this was the remains of the Sea Dragon. However, World War II overshadowed the news, so the news wasn't as big as it would have been years before.[20]

Missing at sea since March 1939, Halliburton was declared dead on October 5, 1939 by the Memphis Chancery Court. His empty grave is at Forest Hill Cemetery in Memphis at the Halliburton family gravesite.

A vigorous correspondent, Halliburton wrote numerous letters to fans, friends, editors, sponsors, and literary acquaintances. To his parents alone, he wrote well over a thousand letters; a large selection of these, edited in part by his father Wesley, was published in 1940 by Bobbs-Merrill as Richard Halliburton: His Story of His Life's Adventure As Told to His Mother and Father.