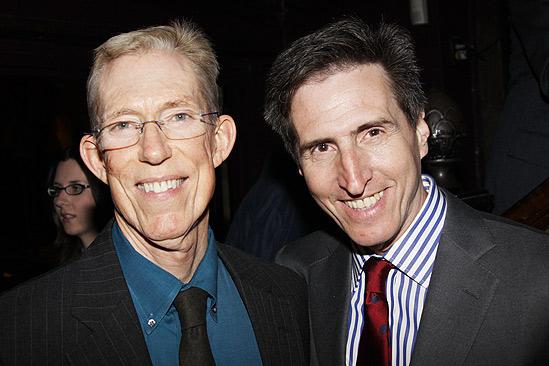 Paul M. Rudnick (born December 29, 1957) is an American playwright, novelist, screenwriter and essayist. His plays have been produced both on and off Broadway and around the world, and Ben Brantley, when reviewing Rudnick's The Most Fabulous Story Ever Told in The New York Times, wrote that, "Line by line, Mr. Rudnick may be the funniest writer for the stage in the United States today." Rudnick lives in New York City with his partner since 1993, John Raftis, a physician.

Rudnick was born and raised in a Jewish family[1] in Piscataway, New Jersey,[2] where his mother Selma was a publicist and his father Norman was a physicist. Rudnick attended Yale College before moving to New York City, where he wrote book jacket copy and worked as an assistant to his friend, the costume designer William Ivey Long. Rudnick began writing for magazines, including Esquire, Vogue, Vanity Fair and Spy.

Rudnick's first play was Poor Little Lambs, a comedy about a female Yale student's attempt to join the Whiffenpoofs, an all-male singing group. The play's cast included the young Kevin Bacon, Bronson Pinchot and Blanche Baker. Rudnick then wrote two novels: Social Disease, a satiric tale of New York nightlife in the vein of Evelyn Waugh's Vile Bodies, and I'll Take It, which was a tribute to Rudnick's mother and aunts and their passionate love of shopping. The Chicago Tribune called the book "absolutely hysterical" and The Boston Globe termed it "Flat out hilarious. Sort of what I imagine P. G. Wodehouse would have written after spending some time in Bloomingdale's."

In the late 1980s Rudnick moved into the top floor of a Greenwich Village brownstone which had once been the 1920s home of the actor John Barrymore. This inspired Rudnick's play I Hate Hamlet, about a young TV star who, as he's about to play Hamlet, is visited by the ghost of Barrymore. The play was produced on Broadway and became notorious when Nicol Williamson, the actor playing Barrymore, began attacking his co-star in a far too realistic manner during a dueling scene.

In 1993 Rudnick had a breakthrough with his Off-Broadway hit, Jeffrey. . At first no theater would produce the play, because it was described as a comedy about AIDS. But after an acclaimed, sold-out run at the tiny WPA Theater in New York City, the show transferred for a commercial run. The play ran from December 31, 1992 to February 14, 1993 at the WPA Theatre.[3] The play transferred to the Off-Broadway Minetta Lane Theatre, running from March 6, 1993 to January 16, 1994.[4] Frank Rich, in The New York Times, called Rudnick "a born show-biz wit with perfect pitch for priceless one-liners". Stephen Holden, also in the Times, said that Jeffrey w was "Just the sort of play Oscar Wilde might have written had he lived in 1990s Manhattan."[5] Rudnick won an Obie Award, an Outer Critics Circle Award and the John Gassner Playwrighting Award.[3] The original cast featured John Michael Higgins as "Jeffrey", Edward Hibbert, Bryan Batt and Harriet Harris and was directed by Christopher Ashley.

Rudnick's later plays included The Naked Eye, which depicted an extreme photographer along the lines of Robert Mapplethorpe, and in 1998, The Most Fabulous Story Ever Told, which was inspired by the fundamentalist remark, "God made Adam and Eve, not Adam and Steve." In Rudnick's revisionist take on the Bible, God makes Adam and Steve, along with the first lesbians, Jane and Mabel. While the play was protested by religious groups, it moved for a commercial run and the New York Daily News said, "You will find yourself laughing uncontrollably throughout the evening."

Rudnick also wrote Valhalla, an epic which entwined the lives of a World War II soldier from Texas with Ludwig, the Mad King of Bavaria; Regrets Only, a drawing room comedy starring Christine Baranski and George Grizzard; and The New Century, a collection of related one-acts, which was produced at Lincoln Center and for which the actress Linda Lavin won a Drama Desk Award. Rudnick has more recently contributed two pieces, The Gay Agenda and My Husband, to the Off-Broadway anthology Standing on Ceremony: The Gay Marriage Plays.

Rudnick has worked as an uncredited script doctor on movies including The Addams Family and The First Wives Club. He was credited as the pseudonym Joseph Howard for his work on Sister Act, which was originally intended as a vehicle for Bette Midler; the screenplay went through many changes, and by the time it became re-fashioned for Whoopi Goldberg he refused to have his real name associated with it. He received sole writing credit for Addams Family Values, In & Out, and the screen version of his play Jeffrey. Rudnick's later screenwriting forays included Isn't She Great and the remake of The Stepford Wives.

In 2011, HarperCollins published I Shudder, a collection of Rudnick's autobiographical essays, some covering his work on stage and screen, interspersed with fictional pieces depicting Elyot Vionnet, a fictional alter-ego. Since 1998, Rudnick has been a frequent contributor to The New Yorker, mostly of over 50 short humor pieces. His work appears in the collections Fierce Pajamas and Disquiet, Please.

In 1988, Rudnick began producing satiric film criticism for Premiere Magazine under the name Libby Gelman-Waxner, a deranged Manhattan wife, mother and "Assistant Buyer of Juniors Activewear." A collection of Libby's columns was published in 1994 under the title If You Ask Me, and Janet Maslin, in The New York Times, wrote that, "Mr. Rudnick weaves many a trenchant thought into Libby's comic screeds." Premiere folded in 2007, but Libby resumed writing a monthly column for Entertainment Weekly in 2011.

On 26 January 2017, it was announced that Rudnick will write the book for a Broadway musical adaptation of the critically acclaimed novel and film The Devil Wears Prada along with Kevin McCollum as the producer and Elton John as composer. The timeline for the musical will be announced later.[6]