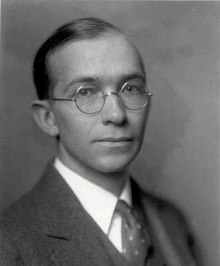 After teaching at Smith College in Northampton, Massachusetts for 38 years, he was forced into retirement in 1960 after pleading guilty to charges stemming from the possession of pictures of semi-nude males that the law deemed pornographic.[a][1]

Arvin was also one of the first lovers of the author Truman Capote.

He taught at Smith College for 38 years and was Mary Augusta Jordan Professor of English during the year before his retirement in 1961. He rarely left Northampton for long nor travelled far. He visited Europe only once in the summer of 1929 or 1930. He spent a year's leave of absence in the mid-1920s as the editor of Living Age, a weekly compendium of articles from British and American periodicals.[2]

Arvin often wrote about political issues and took public political positions. For example, in 1936, on the day when Harvard celebrated its 300th anniversary, he joined a group of 28 Harvard graduates in an attack on retired Harvard president Abbott Lawrence Lowell for his role years earlier on an advisory Committee to Massachusetts Governor Alvan T. Fuller that found that Sacco and Vanzetti had received a fair trial. Among his co-signors were editor Malcolm Cowley and author John Dos Passos.[3]

His first book-length publication, Hawthorne, appeared in 1929. A Guggenheim Foundation Fellowship in 1935[4] provided him a respite from teaching during which time he completed a biography of Walt Whitman.[5]

Arvin had a relationship with another Smith faculty member in 1930, but the pressures on the two men caused it to quickly end leaving both feeling depressed and isolated. On the rebound, Arvin married a young woman in 1932, hoping desperately that it might cure him of his homosexuality. Though he managed to have sexual relations with his wife, the marriage was a disaster and by 1935 they were living apart. It was only after his 1940 divorce that Arvin came to understand that he was gay and he found the revelation agonizing, feeling that he was sick and disgusting.

In 1939, he became a trustee of Yaddo, the artist's colony in Saratoga Springs, New York, where he was also a frequent writer in residence. There in the summer of 1946 he met and began a two-year affair with the young Truman Capote. Newton addressed him as "Precious Spooky" in amorous letters that went on to discuss literary matters.[6] In 1948 Capote dedicated his novel Other Voices, Other Rooms to Arvin, and he later described how much he learned from Arvin saying: "Newton was my Harvard".[7]

Arvin came to national attention with the publication in 1950 of Herman Melville,, a critical biography of the novelist. It won the second annual National Book Award for Nonfiction in 1951.[8]

Arvin was elected a member of the National institute of Arts and Letters in 1952.[10] Edmund Wilson wrote that of all critics of American literature only Arvin and his teacher Van Wyck Brooks "can themselves be called first-rate writers."[11]]

In 1960, the office of the United States Postmaster General (then Arthur Ellsworth Summerfield) initiated a campaign against the distribution and possession of lewd materials, including soft-core homosexually-themed pictures. At the same time, local officials in Northampton were engaged in an anti-homosexual crusade. On September 2, officers of the Massachusetts State Police arrested Arvin on pornography-related charges. The police charged Arvin with "being a lewd person" and charged both him and a Smith faculty colleague, Edward Spofford, with "possession of obscene photographs." Police said Arvin led them to Spofford and that both implicated other male faculty members. Arvin, they said, admitted "displaying the photographs at his apartment and swapping them with others."[13]] Further reports specified that the pictures were of males, later revealed as issues of Grecian Guild Pictorial and Trim: Young America’s Favorite Physique Publication containing pictures of semi-nude men.[6][14]

The Mary Augusta Jordan Professor at Smith, a preeminent literary critic admired by Edmund Wilson and Lillian Hellman, and the mentor (and onetime lover) of Truman Capote, Arvin had won the National Book Award in 1951 for a biography of Herman Melville. The other suspect arrested, Edward W. "Ned" Spofford, just due to start his graduate studies at Harvard, was Arvin’s dearest friend, possibly his lover. Though Arvin did find the words, telling words, confessing in his characteristically weak and timid way to Spofford that "I couldn't go through this alone", it ruined their relationship; Spofford was so angry he refused Arvin's deathbed offer of reconciliation. Eventually, though, Spofford grew up: "Newton and I," he later allowed, "were each other's closest friend."

Henry-Russell Hitchcock was a major target. He was in Europe at the time and only escaped arrest because the man who was house sitting for Hitchcock was able to find his stash of pornography and throw it into the Westfield River. The house sitter also burned incriminating letters, including valuable correspondence from composer Virgil Thomson.

Arvin eventually pleaded guilty, paid fines of $1200, and was given a one-year suspended sentence and placed on probation.[11]

Smith College suspended Arvin from teaching, but kept him on half salary until retirement age. Yaddo removed him from its board, but soon offered him a fellowship, though he never visited the colony again. Not long after his arrest, Arvin spent some time in Northampton State Hospital where he was admitted for suicidal depression.[6][15]

The only other faculty member caught up in the police sweep was Joel Dorius. Newton's biographer wrote that Newton provided the police with the names of Dorius and Spofford, but Arvin's relatives (a nephew writing on behalf of himself and his mother, Arvin's sister) have claimed that Arvin always denied that and said that the police obtained the names from materials found in his home.[15][16] The Smith College trustees fired both Dorius and Spofford, both untenured faculty members.[11]

Their convictions were overturned in 1963.[1]

Edward W. "Ned" Spofford continued teaching literature after his termination as professor from Smith College at Stanford University. His publications include The Social Poetry of the Georgics.[17]

Arvin's final major publication, a study of Henry Wadsworth Longfellow, entitled Longfellow, His Life and Work, appeared shortly before his death. The New York Times headlined its review "A Tarnished Reputation Reappraised." The reputation in question was that of Longfellow. The reviewer praised its "fresh and convincing conclusions that Longfellow's best is too good to be left languishing in its present state of neglect," though he expressed dissatisfaction that Arvin "too thinly handles relationships between art and biography."[19]

Newton Arvin died of pancreatic cancer in Northampton on March 21, 1963 and is buried at Union Street/Old City Cemetery in Porter County, Indiana.

Truman Capote established in his will the Truman Capote Award for Literary Criticism to be awarded "in honor of the critic Newton Arvin." It has been awarded annually since 1994 by the University of Iowa. It is said to be the largest annual cash prize for literary criticism in the English language.[20]