Natacha Rambova (born Winifred Kimball Shaughnessy, January 19, 1897 – June 5, 1966) was an American film costume designer and set designer, and occasional actress who was active in Hollywood in the 1920s. In her later life, she abandoned design to pursue other interests, specifically Egyptology, a subject on which she became a published scholar in the 1950s.

Rambova was born into a prominent family in Salt Lake City who were members of The Church of Jesus Christ of Latter-day Saints. She was raised in San Francisco and educated in England before beginning her career as a dancer, performing under Russian ballet choreographer Theodore Kosloff in New York City. She relocated to Los Angeles at age 19, where she became an established costume designer for Hollywood film productions. It was there she became acquainted with actor Rudolph Valentino, with whom she had a two-year marriage from 1923 to 1925. Rambova's association with Valentino afforded her a widespread celebrity typically afforded to actors.[1] Although they shared many interests such as art, poetry and spiritualism, his colleagues felt that she exercised too much control over his work and blamed her for several expensive career flops.

After divorcing Valentino in 1925, Rambova operated her own clothing store in Manhattan before moving to Europe and marrying the aristocrat Álvaro de Urzáiz in 1932. It was during this time that she visited Egypt, and developed a fascination with the country that remained for the rest of her life. Rambova spent her later years studying Egyptology and earned two Mellon Grants to travel there and study Egyptian symbols and belief systems. She served as the editor of the first three volumes of Egyptian Religious Texts and Representations (1954–7) by Alexandre Piankoff, also contributing a chapter on symbology in the third volume. She died in 1966 in California of a heart attack while working on a manuscript examining patterns within the texts in the Pyramid of Unas. 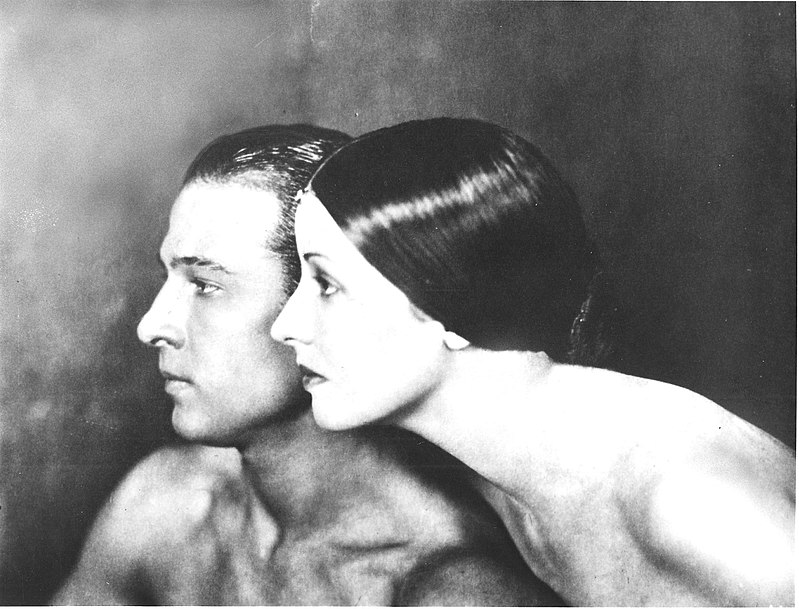 Rambova has been noted by fashion and art historians for her unique costume designs that drew on and synthesized a variety of influences, as well as her dedication to historical accuracy in crafting them. Academics have also cited her interpretive contributions to the field of Egyptology as significant. In popular culture, Rambova has been depicted in several films and television series, figuring significantly in the Valentino biopics The Legend of Valentino (1975), in which she was portrayed by Yvette Mimieux, and Ken Russell's Valentino (1977) by Michelle Phillips. She was also featured in a fictionalized narrative in the network series American Horror Story: Hotel (2015), portrayed by Alexandra Daddario.

Claims that Rambova was bisexual or homosexual date back to at least 1975 when they appeared in Kenneth Anger's notoriously libelous Hollywood Babylon, in which it is written that Rambova claimed to have never consummated her marriage with Rudolph Valentino.[93] This has led some historians to refer to the couple's union as a "lavender marriage."[94] The claim, however, is at odds with the grounds of Valentino's 1922 arrest after the couple's wedding: he was arrested and jailed for consummating the marriage in Palm Springs, California despite still being legally married to Jean Acker.[95] Discussion of Rambova's sexuality continued to appear in academic and biographical texts throughout the 1980s and beyond.[b]

The basis of the claim is an alleged relationship Rambova had with Alla Nazimova,[c] her friend and peer while Rambova was beginning her career in film design.[d][102] Similar inferences have been made about others in Nazimova's social circle, including Marlene Dietrich, Eva Le Gallienne, and Greta Garbo.[103]

Whether Rambova was bisexual or homosexual is unclear; some have disputed such claims, including journalist David Wallace, who dismisses it as rumor in his 2002 book Lost Hollywood.[104] Biographer Morris also disputes the claim, writing in his epilogue of Madam Valentino that "the convenient ... allegation that Rambova was a lesbian collapses when one scrutinizes the facts."[105] Additionally, a close friend of writer Mercedes de Acosta (also an alleged lover of Nazimova) told Morris that she believed Rambova and Nazimova's relationship was nothing other than platonic.[103] Rambova's friend Dorothy Norman also stated that Rambova had been "displeased" by De Acosta's controversial 1960 autobiography, which implied she was bisexual or homosexual, as it had "cast her in an improper light."[103] In his 1996 book The Silent Feminists, however, Anthony Slide stated that "all who [knew] Rambova deny that she was a gay woman."[106]

In the early 1950s Rambova developed scleroderma, which significantly affected her throat, impeding her ability to swallow and speak.[86] She also grew delusional, believing that she was being poisoned, and quit eating, resulting in malnourishment.[87] On September 29, 1965, she was discovered going "berserk" in a hotel elevator in Manhattan.[88] Rambova was admitted to Lenox Hill Hospital, where she was diagnosed with paranoid psychosis brought on by malnutrition.[89]

With her health in rapid decline, Rambova's cousin, Ann Wollen, relocated her from her home in Connecticut to California, in order to help take care of her.[90] There, Rambova was admitted to Methodist Hospital in Arcadia.[88] On January 19, 1966 (her 69th birthday), she was relocated to a nursing home at Las Encinas Hospital in Pasadena.[88] She died there six months later of a heart attack on June 5, 1966 at the age of 69.[91][92] At her wishes, Rambova was cremated, and her ashes were scattered in a forest in northern Arizona.[77]