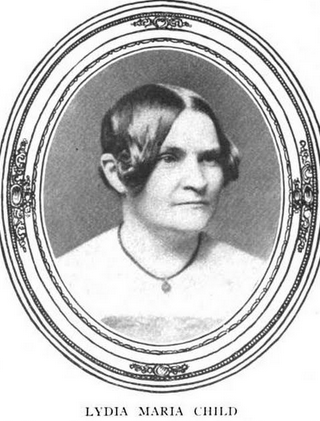 Lydia Maria Francis Child (born Lydia Maria Francis) (February 11, 1802 – October 20, 1880), was an American abolitionist, women's rights activist, Native American rights activist, novelist, journalist, and opponent of American expansionism. Ridiculed as a “petticoat politician,” Child endured harassment and even financial ruin for her radical positions on abolition and women’s rights. Boston’s community of reform-minded professional women created a fertile environment for female accomplishment in the mid–nineteenth century. It was these women whom Harriet Hosmer sought out, gravitating toward such pioneering figures as the writer and abolitionist Lydia Maria Child and later the successful thespian Charlotte Cushman. Relentless in her pursuit of social justice, Child served as a strong and indomitable model for the young Hosmer, living in close proximity in the Boston suburb of Watertown. Encouraging Hosmer’s independence, Child had recognized something special in the young girl. Hatty had “refused to have her feet cramped by the little Chinese shoes, which society places on us all,” Child later wrote in an article on the aspiring young artist.

Child's journals, both fiction and domestic manuals, reached wide audiences from the 1820s through the 1850s. At times she shocked her audience as she tried to take on issues of both male dominance and white supremacy in some of her stories.

Despite these challenges, Child may be most remembered for her poem "Over the River and Through the Wood." Her grandparents' house, which she wrote about visiting, was restored by Tufts University in 1976 and stands near the Mystic River on South Street, in Medford, Massachusetts.

Lydia Maria Francis born in Medford, Massachusetts, on February 11, 1802, to Susannah (née Rand) and Convers Francis. She went by her middle name, and pronounced it Ma-RYE-a.[1] Her older brother, Convers Francis, was educated at Harvard College and Seminary, and became a Unitarian minister. Child received her education at a local dame school and later at a women's seminary. Upon the death of her mother, she went to live with her older sister in Maine, where she studied to be a teacher. During this time, her brother Convers, by then a Unitarian minister, saw to his younger sister's education in literary masters such as Homer and Milton. In her early 20s, Francis lived with her brother and met many of the top writers and thinkers of the day through him. She also converted to Unitarianism.[1]

Francis chanced to read an article in the North American Review discussing the field offered to the novelist by early New England history. Although she had never thought of becoming an author, she immediately wrote the first chapter of her novel Hobomok. Encouraged by her brother's commendation, she finished it in six weeks and had it published. From this time until her death, she wrote continually.[2]

Francis taught for one year in a seminary in Medford, and in 1824 started a private school in Watertown, Massachusetts. In 1826, she founded the Juvenile Miscellany, the first monthly periodical for children published in the United States, and supervised its publication for eight years.[2] After publishing other works voicing her opposition to slavery, much of her audience turned against her, especially in the South. The Juvenile Miscellany closed down after book sales and subscriptions dropped.[1]

Lydia Francis taught school until 1828, when she married Boston lawyer David Lee Child.[5] His political activism and involvement in reform introduced her to the social reforms of Indian rights and Garrisonian abolitionism. She was a long-time friend of activist Margaret Fuller and frequent participant in Fuller's "conversations" held at Elizabeth Palmer Peabody's North Street bookstore in Boston.

She wrote over fifty books, edited periodicals and wrote many poems during her lifetime. Her most popular book was "The Frugal Housewife" which had thirty-three editions and her most famous poem was the Thanksgiving classic "Over the River and Through the Woods to Grandfather's House We Go". In addition to popular works, she used her writing skills to become a leader in the anti-slavery movement. In 1833 she published "An Appeal in Favor of That Class of Americans Called Africans", which some historians consider the first abolitionist book published in the United States. She followed this book with other abolitionist writings including editing the "National Anti-Slavery Standard" and authoring "The Freedmen's Book" to help freed slaves after the Civil War. She wrote works promoting the suffrage movement, is considered the author of New England's first historic novel and is credited with starting the United States' first children's magazine, "Juvenile Miscellany". Recognized by her contemporaries as one of America's most powerful writers, she was still active in social causes at the time of her death in Wayland, Massachusetts.

As one of the great intellects of her time, Margaret Fuller asserted leadership among Boston feminists by instituting her “Conversations” in 1839. For five years she led a “gifted and extraordinary circle” of feminine colleagues in conversation. Progressive women of all stripes attended these meetings, including Lydia Maria Child and others active in the Boston Female Anti-Slavery Society. Elizabeth Peabody, a Boston-area educator and reformer, hosted the meetings at her bookstore on West Street in Boston. Her sister Sophia Peabody, future wife of Nathaniel Hawthorne and artist in her own right, also appeared at these meetings. It is likely that the sculptor Sarah Fisher Ames participated as well. Attending the Conversations for three years, Ednah Dow Cheney, the future director of the School of Design for Women in Boston, wrote that Fuller “did not make us her disciples, her blind followers. She opened the book of life and helped us to read it for ourselves.”

Child also served as a member of the executive board of the American Anti-Slavery Society during the 1840s and 1850s, alongside Lucretia Mott and Maria Weston Chapman.

Caroline Sturgis Tappan wrote and illustrated two books for children, Rainbows for Children (1847) and The Magician’s Show Box, and Other Stories (1856).[6] Bowing to the dictates of her class and its restrictions on gender, Sturgis did not reveal her authorship of these two books, attributing them instead to her friend Lydia Maria Child.[7]

Child died in Wayland, Massachusetts, aged 78, on October 20, 1880, at her home at 91 Old Sudbury Road. She was buried at North Cemetery in Wayland.[13] At her funeral, abolitionist Wendell Phillips shared the opinion of many within the abolition movement who knew her, "We felt that neither fame, nor gain, nor danger, nor calumny had any weight with her."[1]