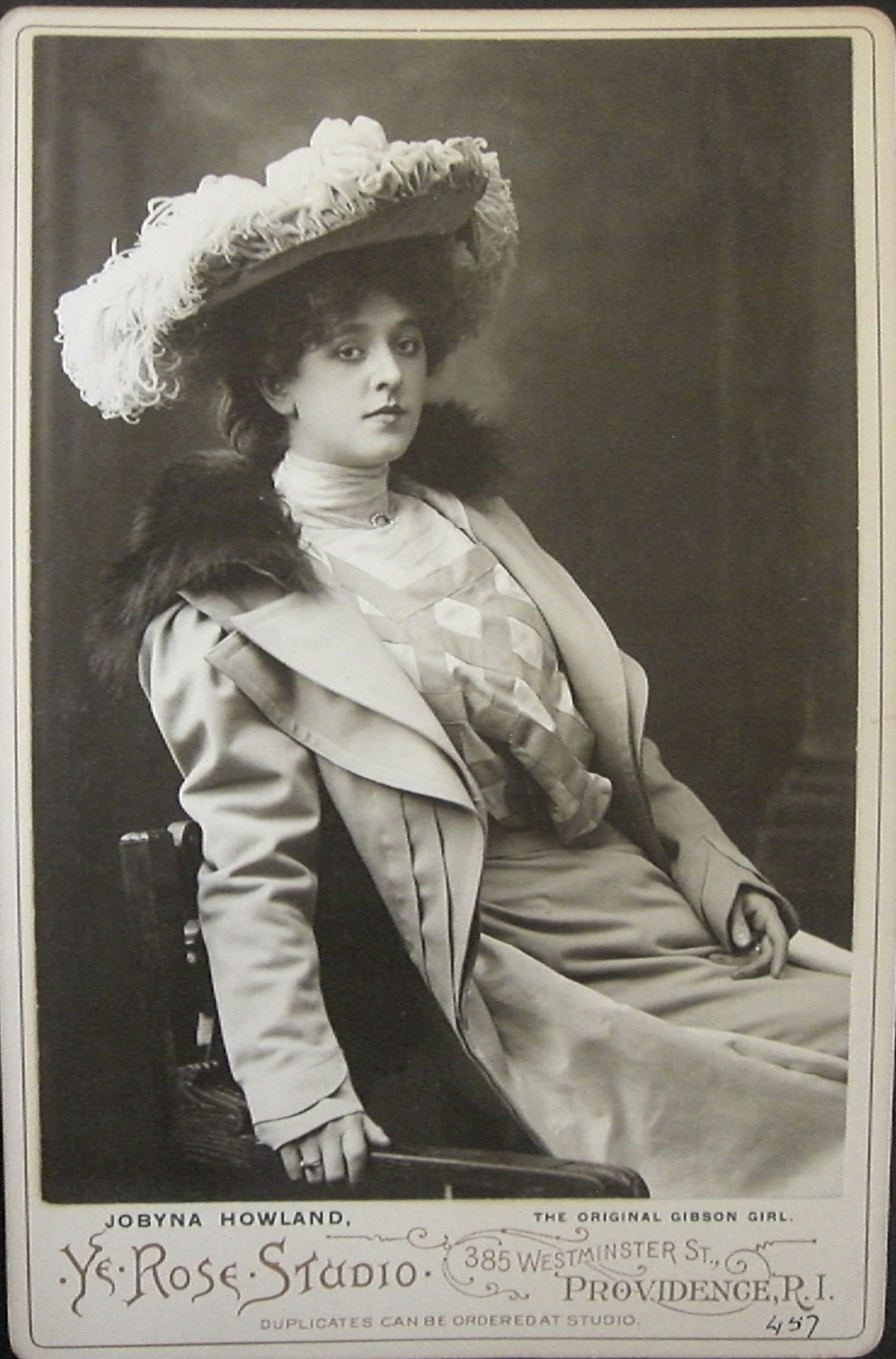 Jobyna Howland (March 31, 1880 – June 7, 1936) was an American stage and screen actress. Born to a Civil War veteran named Joby Howland (who at age 11 was one of the youngest enlistees in the conflict) and his wife Mary C. Bunting, she was given the feminine version of her father's name. Tall, regal and beautiful, red-haired Howland was one of several models for Charles Dana Gibson's famous sketching The Gibson Girl.[1]

Howland made her first appearance on the New York Stage in 1899 managed by Daniel Frohman. During her long theatrical career, she apprenticed everything from drawing room farces to musical comedies always seeming to play the other woman, a best friend's pal or a distant cousin. She didn't achieve the kind of stardom of other beautiful actresses such as Elsie Ferguson, but was content to play the amiable and much needed support so vital in numerous Broadway productions.[2]

She decided to try her luck in film and moved to a Frank Lloyd Wright bungalow in Beverly Hills which was maintained by Hernando, a Navajo servant who liked to sample Howland's makeup. [3] She appeared in a few silent pictures, but this medium did not seem to suit her booming, direct and distinct voice. In sound films, she typically played the kind of roles she had mastered on the stage, the domineering but dependable support. Her appearances in the comedies of Bert Wheeler & Robert Woolsey are some of her best known.

Howland was married once to Arthur Stringer (married 1903) but the marriage didn't last and was dissolved (1914). She bore no children. For many years, up to the end of her life, she was the life partner of Broadway playwright Zoe Akins. According to Anita Loos, the two squabbled often, "But such gibes actually held the key to their devotion." [8] Their home bustled with famous folk: in addition to Arzner, where was Ethel Barrymore, Judith Anderson, Gilmor Brown, Billie Burke, Peggy Wood, W. Somerset Maugham, and George Cukor. Writing about his first visit to the film colony in Vogue in 1931, Cecil Beaton singled out for distinction "the house shared by Misses Zoe Akins and Jobyna Howland, full of the most exquisite objects, full of charming and literary personalities.

Zoe gave her friend's career a boost in 1922 when she wrote "The Texas Nightingale" especially for her. Joby scored terrificc reviews playing the part of a temperamental opera diva. A few years later, when Zoe's health caused her to move to California, Joby followed. Letters from friends reveal the depth of devotion between them. One of their closest friends was the Austrian filmmaker and stage director Leontine Sagan, whose film Madchen in Uniform (1931) caused an international uproar for its frank, sympatethic depiction of a lesbian love story. Tellingly, Sagan would write to Akins of how much she admired her relationship with Joby.

In March 1932, she married Hugo Rumbold (in the last year of his life), a British painter and set designer. He was from an old British aristocratic family, the brother of the ambassador to Berlin, and about as effete as they come. "Zoe just loved saying, "You know, my sister-in-law is Lady Rumbold,"" said her firiend Elliot Morgan. "Oh, yes, the marriage to Hugo was one of convenience, Zoe's convenience in becoming an aristocrat." They were married at Zoe's home in Pasadena, with a reception hosted by Noel Coward, George Cukor, William Haines, and Tallulah Bankhead. After the marriage, of course, Joby and Zoe no longer lived together, with Joby taking a home in Beverly Hills. There, she pointedly told an interviewer her only companion was a Pomeranian she'd namaed Zoe. Billie Burke, around the time of her affair with Dorothy Arzner, wrote to the new bride urging her to find happiness with Hugo. He was someone, Burke said, who could appreciate and understand her. But in November, Rumbold wrote in frustation that he had expected an idyllic married life, but he'd discovered instead that his wife wrote better love scenes for the screen than she did for her own husband. Just a few days after he sent this letter, poor Hugo was dead. Reports of the cause of death varied from a heart attack to lingering injuries he'd sustained in WWI.

Soon the papers were back to reporting that Zoe and Joby showed up "arm-in-arm" at Hollywood functions. In 1935, Joby starred in Zoe's play "O Evening Star," based on the life of Marie Dressler. It came close to being an all-gay production: Zoe, Joby, the director Leontine Sagan, scenic designer Stewart Chaney, and at least one actor in the cast, Zoe's food chum Anderson Lawler.

Howland was found dead on the kitchen floor of her home in 1936. Police said death apparently was caused by heart disease. Zoe was listed among her survivors as her "intimate friend", seated in a "place of honor" at the funeral. Leontine Sagan would write of being touched by Zoe's care for Joby at the end.