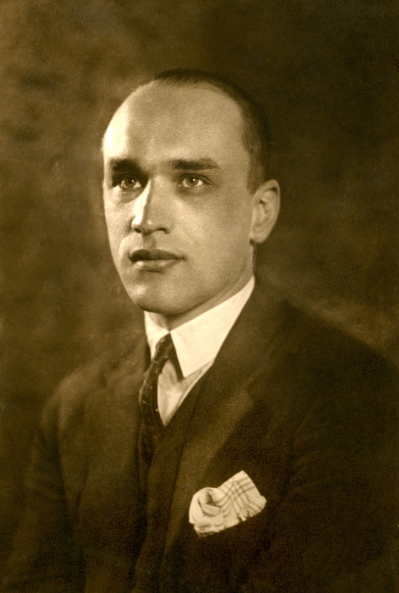 Jarosław Iwaszkiewicz (February 20, 1894 - March 2, 1980) was a Polish writer. Born into the Polish minority living in Ukraine, Iwaszkiewicz studied law and music in Kiev from 1912, settling in Warsaw in 1918, where he belonged to Skamander, a group of lyrical poets which included other homosexuals, such as Jan Lechoń and Stanisław Baliński. In 1922, Iwaszkiewicz married Anna Lilpop, the daughter of a rich Warsaw industrialist, a marriage which resulted in two daughters. However, his marriage did not lead to a change in his life-style. A friend and cousin of the gay Polish composer Karol Szymanowski, Iwaszkiewicz wrote the libretto for his homoerotic opera Król Roger, premiered in Warsaw in 1926. Iwaszkiewicz joined the Ministry of Foreign Affairs, serving as a member of the Polish legations to Copenhagen and Brussels during 1932– 1936. When Poland was occupied by Nazi Germany, he sheltered fugitives from the Nazis at the family home in Stawisko. Beginning in 1949, he cooperated with the new Communist government. For example, he was appointed chairman of the Polish Committee to Defend Peace and became a member of the Polish parliament. Iwaszkiewicz presided over the Union of Polish Writers (ZLP) three times; from 1955 he edited the important monthly literary periodical Twórczość (Creation). In 1970, he was awarded the International Lenin Prize.

His work is devoted to exploring the link between creativity and eroticism. His early poetic fable, Ucieczka do Bagdadu (Escape from Baghdad, 1923) already has a distinct homosexual accent. Many of his works have homoerotic plots. In Panny w Wilka (Ladies from Wilko, 1932), the protagonist Wiktor has an affair with his cousin Julcia, later acknowledged to be based on an affair the author had with a man (whom the novella transformed into a female). In later works, such as the novels Czerwone tarcze (Red Shields, 1934), Młyn nad Utrat (The Mill over Utrata, 1936) or the short stories Nauczyciel (The Teacher) and Zygfryd (Siegried), he was more open about homosexuality. Even in his most popular work, the family saga, Sława i Chwała (Glory and Fame) published in 1956– 1962 and relating the fate of Poles between 1914 and 1945, homoeroticism appears.

Iwaszkiewicz also published many volumes of poetry, such as Dionizje (Dionysios, 1922) and Mapa Pogody (Weather Map, 1977), dramas, essays, journalism, translations and reminiscences. His autobiography, Ksia ¸ żka moich wspomnie (Book of my Memories, 1957), recalls his fascination for the homoerotic. He translated into Polish the works of gay authors, such as Arthur Rimbaud and André Gide. Iwaszkiewicz's life recalls the rich intellectual basis of Polish gay culture in the inter-war period as well as its continued existence in post-war Poland.