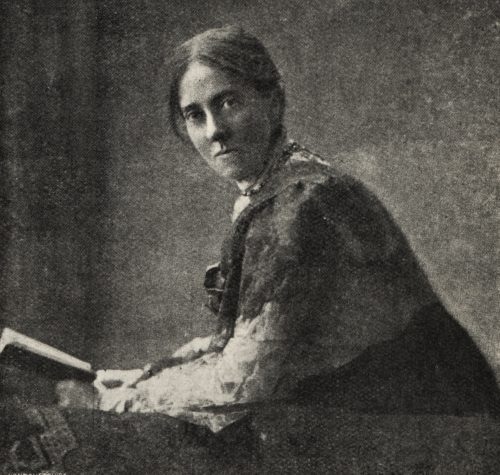 Isabella Ormston Ford (23 May 1855 – 14 July 1924) was the first woman Speaker at Labour Party Conference in 1903. Women novelists made greater use of a romantic friendship model in the representation of female relationships such as that of Hadria Fullerton and Valeria Du Prel in Mona Caird's The Daughters of Danaus (1894), Lucretia Bampfylde and Kitty Manners in Isabella Ford's On the Threshold (1895) and Rosalind Dangerdield and Leslie Ardent in Gertrude Dix's The Image Breakers (1900). Her name and picture (and those of 58 other women and men's suffrage supporters) are on the plinth of the statue of Millicent Fawcett in Parliament Square, London, unveiled in 2018.

Ford was an English social reformer, suffragist and writer. She became a public speaker and wrote pamphlets on issues related to socialism, feminism and worker's rights. After becoming concerned with the rights of female mill workers at an early age, Ford became involved with trade union organisation in the 1880s. A member of the National Administrative Council of the Independent Labour Party, she was the first woman to speak at a Labour Representation Committee (which became the British Labour Party) conference.

Isabella Ford was born 23 May 1855 in Headingley, Leeds, in the north of England. She was the youngest of eight children of Quakers Robert Lawson Ford and Hannah Pease.[1] Her mother was a cousin of abolitionist Elizabeth Pease Nichol.[2] Her father was a solicitor who ran a local night-school for mill-girls.[3] Contact with these girls gave Ford and her sisters an insight into class differences and an interest in working conditions.[3] When she was 16, she began teaching at her father's school.[1] In the 1880s, Ford became involved with trade unions.[1] She worked with tailoresses who were campaigning for better working conditions; she helped them to form a trade union and was involved when they went on strike in 1889.[1][3] In 1890–91, she marched with workers from Manningham Mills in Bradford. As a result of her involvement, she was elected a life member of the Leeds Trades and Labour Council.[3] She helped found the Leeds Independent Labour Party (ILP) and was president of the Leeds Tailoresses' Union.[1] Her concerns were trade union organisation, socialism and female suffrage. She overcame a natural shyness to become an experienced public speaker, speaking at many meetings related to socialism, workers' rights and women's emancipation.[1] She wrote many pamphlets, as well as a column in the Leeds Forward. In 1895 she was elected parish councillor for Adel cum Eccup in Leeds.[1] In the 1900s, Ford increased her focus on her work for the ILP, and was elected to the national administrative council.[1] She became more involved in the national women's suffrage movement, but felt that feminism and the labour movement were equally important.[1] In 1903 she spoke at the annual conference of the Labour Representation Committee (later the British Labour Party), and was the first woman to do so.[3] Following a 1904 debate with future politician Margaret Bondfield, Sylvia Pankhurst described Ford as "a plain, middle-aged woman, with red face and turban hat crushed down upon her straight hair, whose nature yet seemed to me ... kindlier and more profound than that of her younger antagonist".[1]

Ford formed friendships with Labour politician Philip Snowden, socialist writer Edward Carpenter, poet Walt Whitman, Josephine Butler, Millicent Fawcett and Olive Schreiner.[2][3] She lived most of her adult life with her sisters Bessie and Emily in Adel Grange, the Leeds home that the family moved to when she was 10. Bessie Ford died in 1919 and her sisters moved to a smaller property called Adel Willows in 1922.[1] Isabella Ford died 14 July 1924.[1]