Francis Davis Millet was born in Mattapoisett, Massachusetts. Most sources state that his date of birth was November 3, 1846, but a diary which he kept during his military service stated that November 3, 1864 was his 16th birthday, thus indicating birth in 1848.[1] At age fifteen, Millet entered the Massachusetts regiment, first as a drummer boy and then a surgical assistant (helping his father, a surgeon) in the American Civil War.

He repeatedly pointed to his experience working for his father as giving him an appreciation for the vivid blood red that he repeatedly used in his early paintings. He graduated from Harvard with a Master of Arts degree in 1869. He worked as a reporter and editor for the Boston Courier and then as a correspondent for the Advertiser at the Philadelphia Centennial Exposition. While working as a journalist, he learned lithography and earned money enough to enroll in 1871 in the Royal Academy, Antwerp. There, unlike anyone before him, he won all art prizes at the school offered and was officially hailed by the king of Belgium. As secretary of the Massachusetts commissions to the Vienna exposition in 1873, Millet formed a friendship with the American Charles Francis Adams, and then traveled through Turkey, Romania, Greece, Hungary, and Italy, finally settling in Venice to paint.

Millet had a studio in Rome in the early 1870s and Venice in the mid-1870s, where he lived during the winter of 1874-75 with Charles Warren Stoddard, a well-known American travel journalist who, evidence indicates, had an active sexual interest in men. Historian Jonathan Ned Katz presents letters from Millet to Stoddard that suggest they had a romantic and intimate affair while living a bohemian life together.[9] On May 5, 1875, Stoddard set off for Chester, England, to see Robert William Jones, a fellow with whom, a year earlier, he had shared a brief encounter and who had since been sending him passionate letters. By the summer of 1875, Millet had run out of money and had returned to America, writing to Stoddard, first from Boston, then from his parents' home in East Bridgewater, MA, where he had a studio. 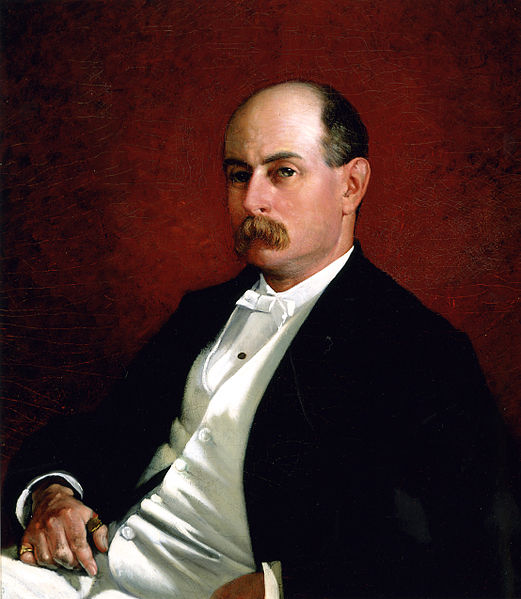 In 1876, Millet returned to Boston to paint murals at Trinity Church in Boston with John LaFarge. He entered the Royal Academy of Fine Arts at Antwerp, Belgium, and won a silver medal in his first year (never before done), followed by a gold medal in his second. In the Russo‐Turkish war of 1877–78, he was engaged as a war correspondent by the New York Herald, the London Daily News, and the London Graphic. He was decorated by Russia and Romania due to his bravery under fire and services to the wounded.

Millet, a well-regarded American Academic Classicist, was close friends with Augustus Saint-Gaudens and Mark Twain, both of whom attended his 1879 wedding to Elizabeth ("Lily") Greely Merrill in Paris, France; Twain was Millet's best man. The couple would have three children: Kate, Laurence, and John.

Millet became a member of the Society of American Artists in 1880, and in 1885 was elected as a member of the National Academy of Design, New York and as Vice-Chairman of the Fine Arts Committee. He was made a trustee of the Metropolitan Museum of Art, and sat on the advisory committee of the National Gallery of Art. He was decorations director for the World's Columbian Exposition in Chicago in 1893, with claims he invented the first form of compressed air spray painting to apply whitewash to the buildings, but the story may be apocryphal, journals from that time note spray painting had already been in use since the early 1880s.[2] His career included work with a number of worlds' fairs, including Vienna, Chicago, Paris, and Tokyo, where he made contributions as a juror, administrator, mural painter/decorator, or adviser.[3]

Millet was a writer and journalist as well as an artist. He translated Leo Tolstoy and also wrote essays and short stories. Among his publications are Capillary Crime and Other Stories (1892), The Danube From the Black Forest to the Black Sea (1892) and Expedition to the Philippines (1899). He was elected a member of the American Academy of Arts and Letters and was also an honorary member of the American Institute of Architects.

A noted sculptor and designer as well, Millet designed the 1907 Civil War Medal at the request of the U.S. Army and United States War Department. He also executed the ceiling of the Call Room of the US Custom House at Baltimore, Maryland.[8]

Millet was also well acquainted with the impressionist artist John Singer Sargent, who often used Millet's daughter Kate as a model, as well as the esteemed Huxley family.

Millet was among the founders of the School of the Museum of Fine Arts, Boston, and was influential in the early days of the American Federation of Arts.[4] He was instrumental in obtaining the appointment of Emil Otto Grundmann, an old acquaintance from his Antwerp days, as first head of the School.[5] Millet was involved with the American Academy in Rome[6] from its inception and served as Secretary from 1904–11. He was a founding member and vice chairman of the U.S. Commission of Fine Arts, serving from 1910 until his death in 1912.[7] He died aboard the Titanic while traveling to New York City on Academy business.[3]

On April 10, 1912, Millet boarded the RMS Titanic at Cherbourg, France, bound for New York City. He was last seen helping Italian women and children into lifeboats. His body was recovered after the sinking by the cable boat Mackay-Bennett and returned to East Bridgewater, Massachusetts, where he was buried in Central Cemetery.[10]

In 1913, the Butt-Millet Memorial Fountain was erected in Washington, D.C., in memory of Millet and his long-time friend Archibald W. Butt, with whom he shared a home.