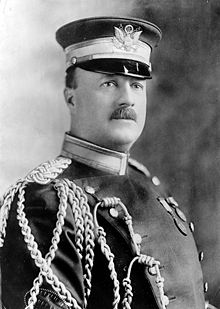 Archibald Willingham DeGraffenreid Clarendon Butt[1] (September 26, 1865 – April 15, 1912) was an American journalist and United States Army officer. After a short career as a newspaper reporter, he served two years as the First Secretary of the American embassy in Mexico. He was commissioned in the United States Volunteers in 1898 and served in the Quartermaster Corps during the Spanish–American War. He gained notice for his work in logistics and animal husbandry, and received a commission in the regular United States Army in 1901. After brief postings in Washington, D.C., and Cuba, he was appointed military aide to Presidents Theodore Roosevelt and William Howard Taft. He died in the sinking of the RMS Titanic.

Butt lived in a large mansion at 2000 G Street NW[66] with the painter Francis Davis Millet, who also died in the sinking of the Titanic. "Millet, my artist friend who lives with me" was Butt's designation for his companion. They were known for throwing spartan but large parties that were attended by members of Congress, justices of the Supreme Court, and President Taft himself.[25]

A wide range of reasons were given why Butt never seemed interested in women. Chief among these was that Butt loved his own mother so much that there was little room for anyone else. Even Taft thought this explanation was true.[67] At the time of Butt's death, rumors swirled that he was about to lose his lifelong bachelor status. News accounts said he had a teenage mistress who either was carrying their unborn child or who had already given birth to a baby, or that Butt was engaged to a Colorado woman. None of these rumors were true.[68][69]

Some speculation exists that Butt was a homosexual. Historian Carl Sferrazza Anthony has written that Taft's explanation only "vaguely addressed" the real reason Butt failed to marry.[68] Davenport-Hines, however, believes Butt and Millet were gay lovers. He wrote in 2012:[25]

The enduring partnership of Butt and Millet was an early case of "Don't ask, don't tell." Washington insiders tried not to focus too closely on the men's relationship, but they recognized their mutual affection. And they were together in death as in life.

Historian James Gifford tentatively agrees. He points out that there is clear documentary evidence that Millet had at least one homosexual affair previously in his life (with the American writer Charles Warren Stoddard).[70] But any conclusion, Gifford says, must remain tentative:[71]

Of course there is no conclusive evidence that Archibald Butt was gay, and I find it highly unlikely, given Archie's careful self-image control, that he ever committed to paper any overt thoughts of such a nature. He was too canny an individual for that, too conscious of the risk in military and political ranks, where such an idea would have put a quick end to any hopes of advancement. So I can only suggest that my research results in an "impression" that he was homosexual.

Millet's body was recovered after the sinking and was buried in Bridgewater, Massachusetts.[72]