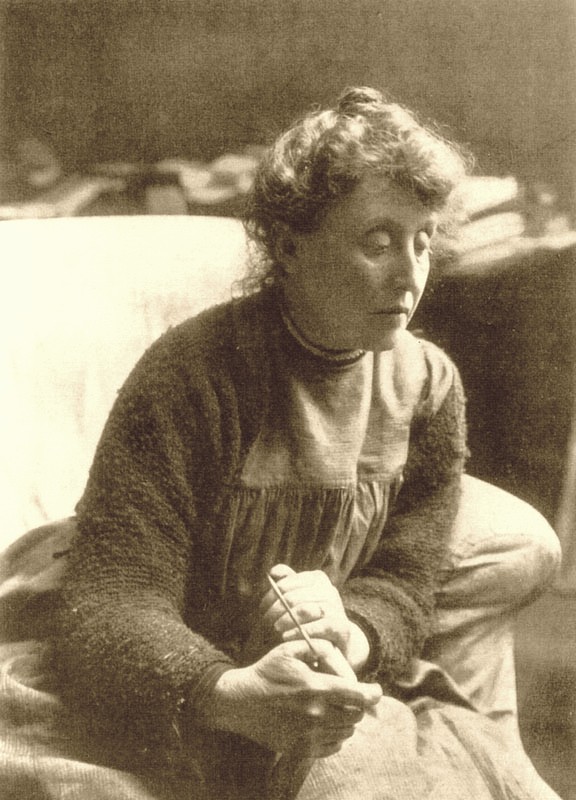 Evelyn De Morgan (30 August 1855 – 2 May 1919), née Pickering, was an English painter associated early in her career with the later phase of the Pre-Raphaelite Movement.[1] The Mourners by Evelyn de Morgan, at Wightwick Manor, encapsulates connections with Oscar Wilde, and the story of May Morris and her companion Miss Lobb, associates of the Mander family – Wightwick’s former owners. Evelyn De Morgan's model for Aurora in Aurora Triumphans, 1877-78, was Jane Hales, who was appointed nursemaid in 1866, to care for Evelyn's sister Wilhelmina (1865-1965). De Morgan's repeated images of Hales - often depicted nude - have encouraged some scholars to speculate on the nature of their relationship. De Morgan's married ceramist William De Morgan, but Hales was a much-loved member of the household and was buried next to Evelyn and William.

Evelyn De Morgan's paintings are figural, foregrounding the female body through the use of spiritual, mythological, and allegorical themes. They rely on a range of metaphors (such as light and darkness, transformation, and bondage) to express what several scholars have identified as spiritualist and feminist content.[2][3][4] Her later works also deal with the themes of war from a pacifist perspective, engaging with conflicts like the Second Boer War and World War I.[2]

She was born Mary Evelyn Pickering[1] at 6 Grosvenor Street,[3] to upper middle-class parents Percival Pickering QC, the Recorder of Pontefract, and Anna Maria Wilhelmina Spencer Stanhope, the sister of the artist John Roddam Spencer Stanhope and a descendant of Coke of Norfolk who was an Earl of Leicester.[2]

De Morgan was educated at home; according to her sister and biographer, Anna Wilhelmina Stirling, their mother insisted that "from the first Evelyn [was to] profi[t] from the same instruction as her brother." [5] She studied Greek, Latin, French, German, and Italian, as well as classical literature and mythology, and was also exposed at a young age to history books and scientific texts.[5]

In August 1883, Evelyn met the ceramicist William De Morgan (the son of the mathematician Augustus De Morgan), and on 5 March 1887, they married.[3] They spent their lives together in London, visiting Florence for half the year every year from 1895 until the outbreak of WWI in 1914.[2] Evelyn De Morgan supported the suffrage movement, and she appears as a signatory on the Declaration in Favour of Women's Suffrage of 1889.[4] She was also a pacifist, and expressed her horror at the First World War and Boer War in over fifteen war paintings including The Red Cross and S.O.S.[1] In 1916 she held a benefit exhibition of these works at her studio in Edith Grove in support of the Red Cross and Italian Croce Rossa.[2]

For the first half of their marriage, De Morgan used the profits from sales of her work to help financially support her husband's pottery business; she also actively contributed ideas to his ceramics designs.[1] The De Morgans finally achieved financial security in 1906 after the publication of William's first novel, Joseph Vance.[2]

Evelyn De Morgan died on 2 May 1919 in London, two years after the death of her husband, and was buried in Brookwood Cemetery, near Woking, Surrey.[2]

De Morgan started drawing lessons when she was 15, and from the outset was dedicated to her craft. On the morning of her seventeenth birthday, she wrote in her diary: "Art is eternal, but life is short…" -- "I will make up for it now, I have not a moment to lose."[3] This diary, given up after a few months, reveals her devotion to her work. She records hours upon hours of "steady work," chastising herself for "wast[ing] time" through daily tasks like going to tea and changing her dress.[5] According to Stirling, De Morgan was interested in little other than painting, and fought hard to be considered seriously as an artist. She rebelled against any efforts to turn her into an "idle" woman, and when her mother suggested she be presented to society, De Morgan rejoined: "I'll go to the Drawing Room if you like...but if I go, I'll kick the Queen!"[5]. Stirling recounts another incident in which De Morgan rejected further attempts to introduce her to society: "It was...suggested to Evelyn that she might like to go into Society and see a little of the world, but she jumped to a conclusion respecting this process which was clearly unjustifiable in her case. 'No one shall drag me out with a halter round my neck to sell me!' was her uncompromising rejoinder."[5]

In 1872, she was enrolled at the South Kensington National Art Training School (today the Royal College of Art) and in 1873 moved to the Slade School of Art, where women had only recently begun to be admitted.[2] At Slade, she was awarded the prestigious Slade Scholarship and won several awards: the Prize and Silver Medal for Painting from the Antique; First Certificate for Drawing from the Antique; and Third Equal Certificate for Composition.[2] She eventually left Slade to work more independently. [5]

De Morgan was known to George Frederic Watts from infancy, and while developing as an artist she would often visit him at his studio-home, Little Holland House.[5][4] She also studied under Watts's student, her uncle John Roddam Spencer Stanhope, who had a great influence on her visual style. Beginning in 1875, Evelyn often visited him in Florence where he lived. This enabled her to study the great artists of the Renaissance, and the influence of Quattrocento artists like Botticelli is especially visible in her works from this point onwards.[2] After this period, De Morgan's art began to move away from the more traditional, classical subjects and style favoured by the Slade school towards a development of her own particular, mature style.[2][3] Through Stanhope, De Morgan also developed friendships with Pre-Raphaelite painters Dante Gabriel Rossetti and William Holman Hunt.[6] She was also friendly with other key figures in the Victorian literary and artistic world, like writer Vernon Lee.[6]

De Morgan first exhibited in 1876 at the Dudley Gallery, and then a year later at the inaugural Grosvenor Gallery exhibition in London.[3] She exhibited regularly until 1907, including a one-woman show at Wolverhampton Municipal Art Gallery and Museum in which 25 works were shown, including 14 for sale.[2] After 1907, she stopped exhibiting regularly; E.L. Smith theorises that this was due to the financial security that came from the success of her husband's first novel, meaning she was no longer obligated to sell her paintings.[2]

In August 1875 De Morgan sold her first work, Tobias and the Angel. Her first exhibited painting, St Catherine of Alexandria was shown at the Dudley Gallery in 1876.

In October 1991, sixteen canvases were destroyed in a fire at Bourlet's warehouse.