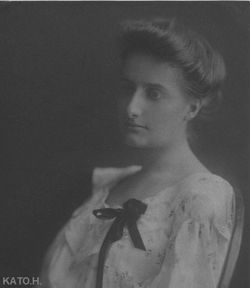 In 1910, she wrote her first article, "Toilers of the Tenements," which she published in McClure's Magazine under the editorship of Willa Cather, thus beginning a lifelong friendship between the two women. When the New Republic was founded in 1914, she became one of its original contributors. In 1916, she published her first book, French Perspectives, a result of her extensive travels to that country as the New Republic's war correspondent.

On October 19, 1918, she was severely injured when her companion picked up a hand grenade that exploded.[2] That experience resulted in her second book, Shadow-Shapes: Journal of a Wounded Woman, 1920.

She moved to Taos, New Mexico in 1920, following her doctor's advice. She wrote about the Pueblo Indians and New Mexico itself until the mid-1930s, publishing mostly in the New Republic and the Nation. She spent extensive time in New York City and at the Macdowell Colony. In 1927, she published a collection of profiles about prominent Americans, Fire Under the Andes. Sergeant studied with Carl Jung and Toni Woolf in Zurich from 1929 to 1931. She published her only novel, Short as any Dream, in 1929.[1]

In the mid-1930s, John Collier, Commissioner of Indian Affairs, hired her to report on Pueblo social conditions and reactions to the Wheeler-Howard Act. Sergeant moved to Piermont in Rockland County, New York. In the 1930s and 1940s, she continued to publish magazine articles. During this period, Sergeant's sister Katharine financially supported her, though the two did not get along and were wary of each other.[3] In 1953, she published the first of her two full-length biographies, Willa Cather: A Memoir. Despite her ill health and failing eyesight, in 1960 she published the well-reviewed Robert Frost: The Trial by Experience.

Sergeant had planned to follow this with an autobiography, but she did not live to complete it. She was staying at the Cosmopolitan Club in New York when she died on January 26, 1965. She was found the next day with the advance for her next book in her pocket. Her wish was to be cremated and have her ashes buried in the Shepley-Sergeant plot in Winchester, Massachusetts. Katharine held a memorial service for her on April 12, 1965 at the Cosmopolitan Club, at which Bryn Mawr College President Katharine McBride introduced the speakers, including Robert Frost's daughter, Leslie Frost Ballantine, and the writer Glenway Wescott.[3]