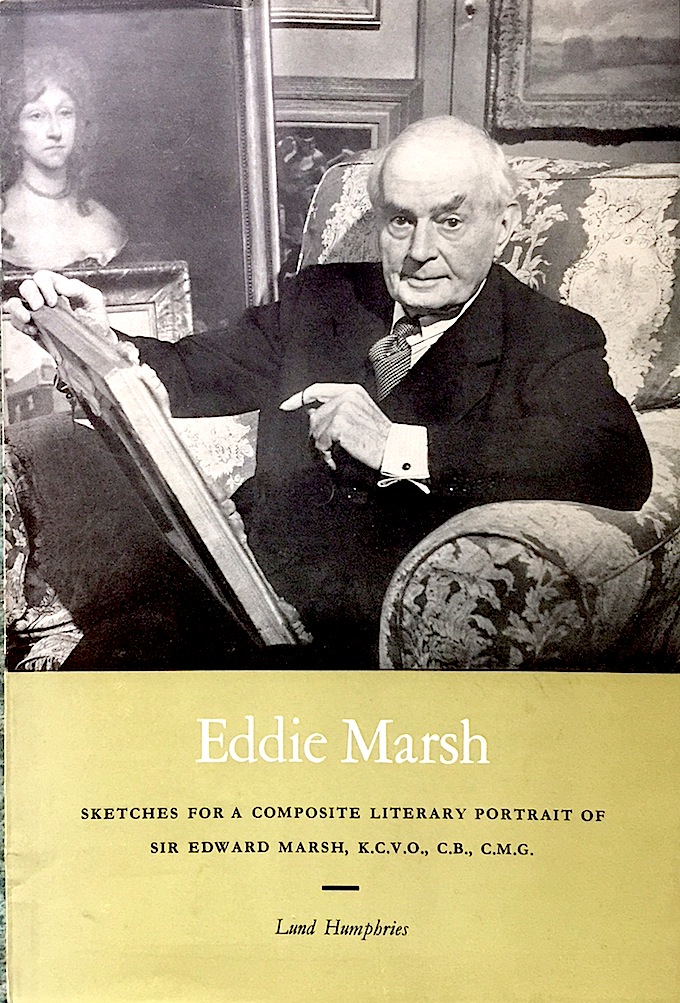 Marsh was the sponsor of the Georgian school of poets and a friend to many poets, including Rupert Brooke and Siegfried Sassoon. He was part of the Cambridge Apostles. In his career as a civil servant he worked as Private Secretary to a succession of the United Kingdom's most powerful ministers, particularly Winston Churchill. He was a discreet but influential figure within Britain's homosexual community.[3][4]

Marsh's father was Howard Marsh, a surgeon and later Master of Downing College, Cambridge. His mother, born Jane Perceval, was a granddaughter of prime minister Spencer Perceval, and a daughter of Spencer Perceval, MP, one of the twelve "apostles" recognized by the movement associated with Edward Irving and known as the Catholic Apostolic Church. Jane, a nurse, was one of the founders of the Alexandra Hospital for Children with Hip Disease; Howard was a surgeon at the hospital. Marsh was educated at Westminster School, London, and Trinity College, Cambridge,[1] where he studied classics under Arthur Woollgar Verrall. At Cambridge, he became associated with R.C. Trevelyan, Bertrand Russell, G.E. Moore, and Maurice Baring. He was a Cambridge Apostle.

In 1896 he was appointed Assistant Private Secretary to Joseph Chamberlain, the Colonial Secretary. When Chamberlain resigned in 1903, Marsh became Private Secretary to his successor, Alfred Lyttelton. When Winston Churchill became Under-Secretary of State for the Colonies in 1905 during Henry Campbell-Bannerman's first Government, Marsh became Churchill's Private Secretary, beginning an association and friendship that would last until Marsh's death. Marsh would be Churchill's Private Secretary for the next ten years, until Churchill left the Government in 1915. As Randolph Churchill put it, from December 1905, "Marsh was to accompany Churchill to every Government department he occupied: to the Board of Trade, the Home Office, the Admiralty, the Duchy of Lancaster, the Ministry of Munitions, the War Office, back to his original Colonial Office and the Treasury."[5] These moves were somewhat irregular as Marsh remained, until 1937, officially a clerk at the Colonial Office, but many exceptions were made, possibly at a cost to Marsh's official advancement.

AA classical scholar and translator, Marsh edited five anthologies of Georgian Poetry between 1912 and 1922, and he became Rupert Brooke's literary executor, editing his Collected Poems in 1918. Later in life he published verse translations of La Fontaine and Horace, and a translation of Eugène Fromentin's novel Dominique.

The sales of the first three Georgian Poetry anthologies were impressive, ranging between 15,000 and 19,000 copies apiece.[6] Marsh and the critic J. C. Squire were the group's most important patrons, and it was in Marsh's London rooms that Siegfried Sassoon and Rupert Brooke met for the first and only time, in June 1914.[7] In 1931, he won a literary contest with a new stanza for Paradise Lost, which repairs the omission of how "Adam and Eve Brush Their Teeth". In 1939, he produced his memoirs, titled A Number of People. An edited collection of letters, Ambrosia and Small Beer, appeared in 1964, recording two decades of correspondence with his friend and biographer, Christopher Hassall.[8]

Marsh advised Somerset Maugham about his writing between 1935 and 1953 with hundreds of pages of criticism. This is recorded in Ted Morgan's biography of Maugham (1980.)

MMarsh was also a consistent collector and supporter of the works of the avant-garde artists Mark Gertler, Duncan Grant, David Bomberg and Paul Nash, all of whom were also associated with the Bloomsbury Group.[9]

IIn addition to his work editing Churchill's writing, Marsh introduced Siegfried Sassoon to Churchill as a means of aiding the former's career. He was also a close friend of Ivor Novello.