Princess Dilkusha de Rohan (nee Alis Wrench, December 30, 1898, India - 1979, Wyoming) was the founder with Vera Boréa - Contessa Boréa de Buzzaccarini Regoli, of a French fashion house in 1931 at 29, rue d'Artois, Paris, one of the first to offer luxury women's sportswear. She was friends with many artists and writers in London and Paris, including Janet Flanner, Dora Maar, Anna Pavlova, Pavel Tchelitchew, Antonina Vallentin, Dolly Wilde, and others.

The Princess, daughter of a British Army officer, Major A.T. Wrench, stationed in India, was educated at Roedean School and married in London on 14 December 1922 Prince Joseph Carlos de Rohan (1895-1931), a German aristocrat, and went to live with him at Herkules Haus in Charlottenburg, Berlin. The marriage was barely consummated due to her new husband’s homosexuality before Carlos had joined Hitler’s ranks early on. Dil met and fell in love with Catherine Devilliers, known as Katusha, a ballet dancer who had been associated with the Bolshoi Ballet. Katusha and Dil had been able to live openly together in Berlin during the 1920s where “they knew the sexual preferences of those who ran the German armed forces, and later Dil fed those ‘scabrous details’ to Ellic Howe who organised BBC broadcasts to Hitler’s fighting forces”.

After the Prince was killed in a car accident in 1931 Dilkusha moved to Paris, where she collaborated with Maximilienne Boréa. The fashion house remained open at 376, rue Faubourg St Honore until 2007. She became part of the circle of Alice B. Toklas, who thought her "bawdy" and drank her first and last Bloody Mary at a birthday party "Dil" gave her. 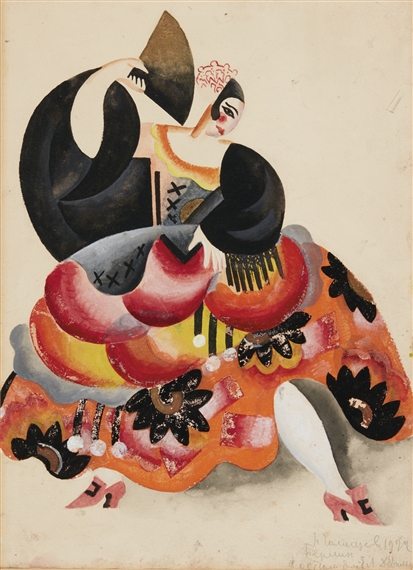 COSTUME DESIGN FOR CATHERINE DEVILLIERS IN SPANISH DANCE AT THE BLAUE VOGEL, 1922

When Dilkusha later moved to London she established a fashion house with Nancy Mitford at 4 Savile Row. She lived with her new lover, Mary Oliver (a London society hostess who worked for a short time at the ministry; a friend of Paul and Jane Bowles, she claimed to be an illegitimate child of Gurdjieff, she was the widow of John Scott “Jock” Oliver (1901– 1938)), and the art collector Douglas Cooper in a wing of Pembroke Lodge, a fifty-two-roomed Georgian mansion in Richmond Park.

During the war Princess Dilkusha de Rohan was head of the Swiss desk at the British Ministry of Information. There she got to know Guy Burgess and would later attend the farewell party for him given by Moura Budberg in 1950 before he left for Washington, DC.