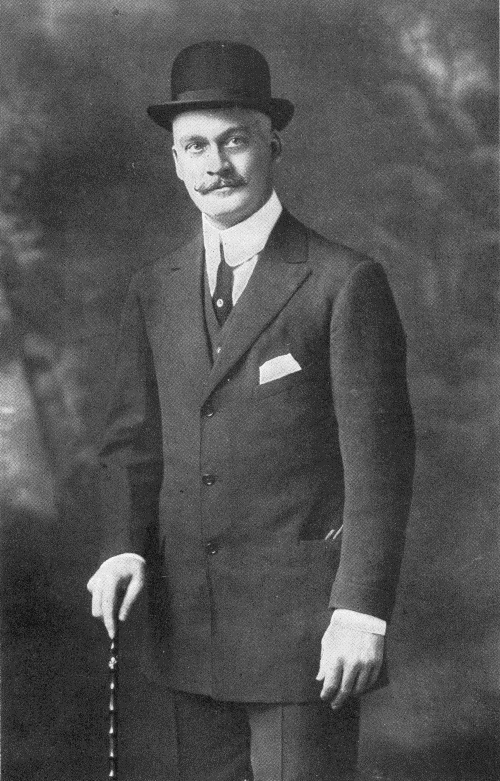 Charles Bancroft Dillingham (May 30, 1868 – August 30, 1934) was a Broadway producer. There have been various reports and rumors of Dillingham's homosexuality including a longtime relationship with Charles Frohman, with whom he lived for some time between his marriages. His second wife's family believed theirs to be a marriage of convenience. He was considered a gentleman of the old school, good-natured, having a good sense of humor, well-dressed and always kept farce, vulgarity, exhibitionism and hints of impropriety out of his productions, befitting the son of a clergyman. He was a pall bearer at Harry Houdini's funeral where he was thought to have quipped, "Let's see him get out of this one."

In addition to their financial dealings, Frohman and Dillingham shared living quarters and attendant intimacies. For many years, the two jointly owned a country retreat, Hiddenbrook Farm, near White Plains, NY. Newspapers record that during the week, the workaholic Frohman spent most of his time at the theatre and kept rooms at a nearby hotel such as the Waldorf-Astoria or the Knickerbocker for sleeping. But he often spent week-ends and holidays at the farm with Dillingham. In his memoirs, Dillingham recounts a special surprise he arranged for Frohman's birthday one year at Hiddenbrook. Frohman had returned from London raving about the perfect waiter, Max Boppler, who had dutifidly served him breakfast precisely to his specifications in bed at the Hotel Savoy every morning. Obligingly, the waiter never made small talk or even uttered a word while he performed these services. Dillingham secretly brought Boppler over from London and the morning of Frohman's birthday had him silently enter and serve his astounded domestic partner breakfast in bed just as the waiter had done at the Savoy.

Charles Bancroft Dillingham was born on May 30, 1868 in Hartford, Connecticut to Edmund Bancroft Dillingham, an Episcopalian clergyman and Josephine Potter. He graduated from the Hartford schools and went to work for a newspaper in Hartford, which sent him to Washington D.C. as a correspondent. He went to Chicago where he joined the staff of the Chicago Times-Herald. Moving to New York he was hired by The Evening Sun for $15 per week. He became a theater critic for the New York Post. In 1896 he wrote a play "Ten P.M." which was produced at the Bijou Thater. The producer Charles Frohman saw it and offered Dillingham a job as a advertising agent. They formed a theatrical alliance and a friendship that lasted until Frohman went down with the Lusitania in 1915.

After leaving the employ of Frohman he formed the Dillingham Theatre Corporation. He also was associated over many years with A. L. Erlanger and Florenz Ziegfeld. The three were the principals of the A.L. Erlanger Amusement Enterprises, Inc. The 1936 Academy award Best Picture Winner The Great Ziegfeld told the story not only of Ziegfeld but also of Dillingham although it used the name "Billings" for Dillingham' likely due to Dillingham estate issues in which the Ziegfeld estate was owed money by the bankruptcy of Dillingham in 1933.

Dillingham was also the owner of the Hippodrome, which in its time was the largest theatrical venue in the world. There he produced ice skating spectacles and competitions,dance troupes such as Anna Pavlova, and it is where 'Poor Butterfly' was first heard. On January 10,1910 he opened the Globe Theatre at Broadway and 46th Street. It was a wonder with a retractable roof. It is in 2018 the Lunt-Fontanne Theatre.

Dillingham also introduced and managed dozens of star actors including Julia Marlowe, Ruby Keeler, and others.

Dillingham began his producing career in 1902, with a production of The Cavalier, starring Julia Marlowe, William Lewers and Frank Worthing. He also produced several musicals and musical reviews during his career, including Watch Your Step, the first musical by Irving Berlin (which featured Vernon and Irene Castle in their Broadway debut).

Dillingham was married in 1896 to actress and singer Jennie Yeamans who was a former child star. She died in 1906. On May 5, 1913 in Purchase, New York he married Eileen Ann Kearney formerly of Stillwater, Minnesota. The new Mrs. Dillingham was part of the Alla Nazimova dance troupe and later was in several productions of Dillingham's. The couple lived at 153 East Sixty-third Street in a home owned in 2018 by Spike Lee. The couple were regulars in society just as the old guard and the theater world began mingling. They were among the early snowbirds fleeing to Palm Beach during the winter season. They were often at European social scenes such as the Ascot and Longchamps racecourses. The marriage broke up in August of 1924 after Mrs. Dillingham became enamored of Julius Broome Livingston Allen, twelve years her junior, whom she married in October of that year. The divorce caused a sensation and was reported in Time magazine. Eileen was a life long friend of Florenz Ziegfeld's wife, actress Billie Burke. She died in 1957 after divorcing her second husband, whom she married twice.

While in Paris in 1922 Adrian was hired by Hassard Short to design the costumes for Irving Berlin's The Music Box Revue. Seeing Adrian's work back in New York, Berlin's chief designer, Charles LeMaire, called them "very nice drawings", but predicted they'd never work as costumes. Consequently he votoed much of Adrian's contributions to the show. LeMaire is the only older gay man on record who seemed impervious to Adrian's spell. "He was a charming, slim, elegant boy with a very long face lit up by strange eyes," Erté would recall. Adrian became friendly with the producer Charles Dillingham, although once again LeMaire scuttled any change of professional advancement from the relationship. Afrian charged that LeMaire was trying to keep him off Broadway. The haughty LeMaire only scoffed. "The trouble is," he said, "you don't design what people want. You design to suit yourself."

Dillingham died on August 30, 1934 at the Hotel Astor where he lived. He was buried in Hartford and was survived by his sister Mabel Ballard Dillingham Newton and her daughter Marjory Newton Nolan.