Barbara Gittings (July 31, 1932 – February 18, 2007) was a prominent American activist for LGBT equality. The Daughters of Bilitis (pronounced be-LEE-tus and abbreviated DOB) began in 1955 in San Francisco as a middle-class social club for lesbians wishing to avoid the bar scene. Rose Bamberger, a Filipina American, had the initial idea for the group and enlisted the aid of her partner and three other lesbian couples. Phyllis Lyon and Del Martin were one of the couples, and they are more famously associated with the group’s founding. Historians credit Lyon and Martin with switching the group’s focus from socializing to organizing and educating. In 1956, the group began publishing The Ladder, a magazine focused specifically on lesbian lives. Many of the most well-known female activists of the pre-Stonewall gay and lesbian movement—Lyon, Martin, Kay Tobin (Lahusen), and Barbara Gittings—held leadership positions within DOB at one time or another, as did a number of lesbians of color, including Cleo Bonner, Ernestine Eckstein, and Ada Bello.

Gittings organized the New York chapter of the Daughters of Bilitis (DOB) from 1958 to 1963, edited the national DOB magazine The Ladder from 1963–66, and worked closely with Frank Kameny in the 1960s on the first picket lines that brought attention to the ban on employment of gay people by the largest employer in the US at that time: the United States government. Her early experiences with trying to learn more about lesbianism fueled her lifetime work with libraries. In the 1970s, Gittings was most involved in the American Library Association, especially its gay caucus, the first such in a professional organization, in order to promote positive literature about homosexuality in libraries. She was a part of the movement to get the American Psychiatric Association to drop homosexuality as a mental illness in 1972. Her self-described life mission was to tear away the "shroud of invisibility" related to homosexuality, which had theretofore been associated with crime and mental illness.[1] She was awarded a lifetime membership in the American Library Association, and the ALA named an annual award for the best gay or lesbian novel the Barbara Gittings Award. The Gay and Lesbian Alliance Against Defamation (GLAAD) also named an activist award for her. At her memorial service, Matt Foreman, the executive director of the National Gay and Lesbian Task Force said, "What do we owe Barbara? Everything."[2] 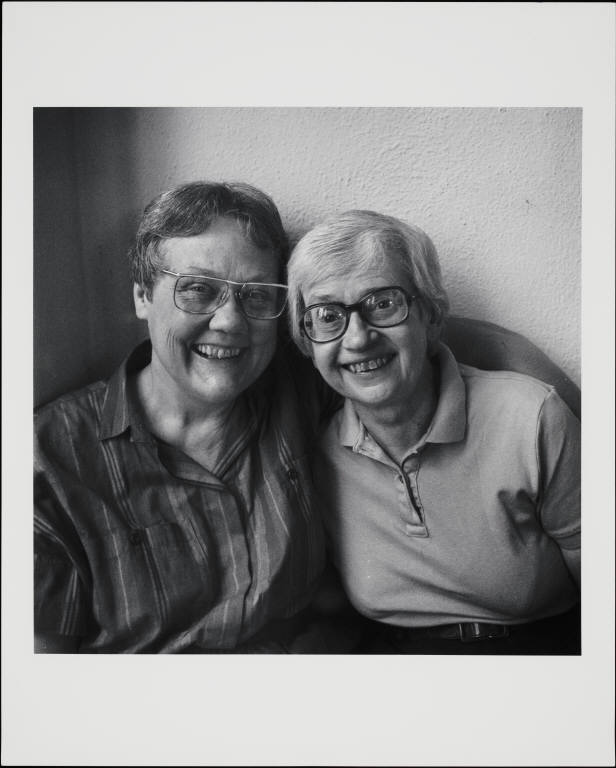 Gittings was an avid music lover, most interested in Baroque and Renaissance music. She sang in choral groups for most of her life, spending over 50 years in the Philadelphia Chamber Chorus.[3] She was also a hiking and canoeing enthusiast. She and her lifelong partner, Kay Tobin (also known as Kay Tobin Lahusen; born 1930) met in 1961 at a picnic in Rhode Island. Gittings described how they began: "We hit it off, we started courting. I flew to Boston [to see her] and got off the plane with a big bunch of flowers in my hand. I couldn't resist. I did not care what the world thought. I dropped the flowers, grabbed her and kissed her. That was not being done in 1961."

Gittings and Lahusen were together for 46 years. They donated copies of some materials and photographs covering their activism to the Cornell University Rare and Manuscript Collections.[4] In 2007, Lahusen donated all of their original papers and photographs to the New York City Public Library (NYPL), whose head, Paul LeClerc, said, "The collection donated by Barbara Gittings and Kay Tobin Lahusen is a remarkable first-hand chronicle detailing the battles of gays and lesbians to overcome the prejudice and restrictions that were prevalent prior to the activism and protest movements that started in the 1960s."[5] The University of Massachusetts Amherst main library received a donation of over 1,000 of Gittings' and Lahusen's books in 2007; it is the Gittings-Lahusen Gay Book Collection, Call no.: RB 005.[6] In 1997, Gittings and Lahusen pushed the American Association of Retired Persons (AARP) to grant couple's membership to them, for a reduced price on health insurance. One of her last acts as an activist was to come out in the newsletter published by the assisted living facility they reside in. On February 18, 2007, Gittings died in Kennett Square, Pennsylvania after a long battle with breast cancer. She is survived by her life partner, Kay Tobin Lahusen, and her sister, Eleanor Gittings Taylor. In 1999, Gittings summed up her inspiration for her activism: "As a teenager, I had to struggle alone to learn about myself and what it meant to be gay. Now for 48 years I've had the satisfaction of working with other gay people all across the country to get the bigots off our backs, to oil the closet door hinges, to change prejudiced hearts and minds, and to show that gay love is good for us and for the rest of the world too. It's hard work — but it's vital, and it's gratifying, and it's often fun!"[7]