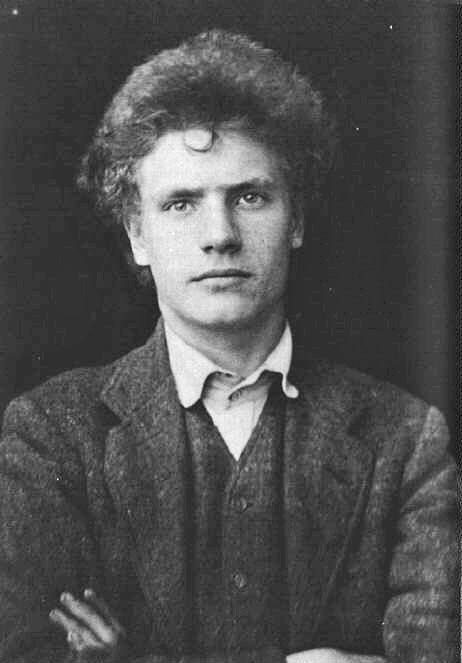 Austin Osman Spare (30 December 1886 – 15 May 1956) was an English artist and occultist[1][2] who worked as both a draughtsman and a painter. Influenced by symbolism and art nouveau his art was known for its clear use of line,[3] and its depiction of monstrous and sexual imagery.[4] Spare's major patron during this period was the wealthy property developer Pickford Waller, although other admirers included Desmond Coke, Ralph Strauss, Thomas Scott-Ellis, 8th Baron Howard de Walden and Charles Ricketts.[23] Spare became popular among avant-garde homosexual circles in Edwardian London, with several known gay men becoming patrons of his work.[35] In particular he became good friends with the same-sex couple Marc-André Raffalovich and John Gray, with Spare later characterising the latter as "the most wonderful man I have ever met."[36] Gray would introduce Spare to the Irish novelist George Moore, whom he would subsequently befriend.[37] The actual nature of Spare's sexuality at the time remains debated; his friend Frank Brangwyn would later claim that he was "strongly" homosexual but had suppressed these leanings.[38] In contrast to this, in later life Spare would refer to a wide variety of heterosexual encounters that took place at this time, including with a hermaphrodite, a dwarf with a protuberant forehead and a Welsh maid.[39] He would unsuccessfully also attempt to woo both Sybil Waller, the daughter of Pickford Waller, as well as a younger girl named Constance "Connie" Smith.[40]

In an occult capacity, Spare developed idiosyncratic magical techniques including automatic writing, automatic drawing and sigilization based on his theories of the relationship between the conscious and unconscious self.

Born into a working-class family in Snow Hill in London, Spare grew up in Smithfield and then Kennington, taking an early interest in art. Gaining a scholarship to study at the Royal College of Art in South Kensington, he trained as a draughtsman, while also taking a personal interest in Theosophy and Occultism, becoming briefly involved with Aleister Crowley and his A∴A∴. Developing his own personal occult philosophy, he authored a series of occult grimoires, namely Earth Inferno (1905), The Book of Pleasure (1913) and The Focus of Life (1921). Alongside a string of personal exhibitions, he also achieved much press attention for being the youngest entrant at the 1904 Royal Academy summer exhibition.

After publishing two short-lived art magazines, Form and The Golden Hind, during the First World War he was conscripted into the armed forces and worked as an official war artist. Moving to various working class areas of South London over the following decades, Spare lived in poverty, but continued exhibiting his work to varying success. With the arrival of surrealism onto the London art scene during the 1930s, critics and the press once more took an interest in his work, seeing it as an early precursor to surrealist imagery. Losing his home during the Blitz, he fell into relative obscurity following the Second World War,, although he continued exhibiting till his death in 1956.

Spare's spiritualist legacy was largely maintained by his friend, the Thelemite author Kenneth Grant in the latter part of the 20th century, and his beliefs regarding sigils provided a key influence on the chaos magic movement and Thee Temple ov Psychick Youth. Spare's art once more began to receive attention in the 1970s, due to a renewed interest in art nouveau in Britain, with several retrospective exhibitions being held in London. Various books have been written about Spare and his art by the likes of Robert Ansell (2005) and Phil Baker (2011).

In failing health, in May 1956 he was submitted to the South Western Hospital in Stockwell with a burst appendix; the doctor noted that he had also been suffering from anaemia, bronchitis, high blood pressure and gall stones. Rushing to see him at his hospital bed, it was here that Spare's two dearest friends, Kenneth Grant and Frank Letchford, met one another for the first time. Spare died on the afternoon of 15 May 1956, at the age of 69.[96] In his will, Spare left Letchford his first choice of 15 pictures, with Grant getting the second choice of 10 others, along with all of his books and papers. His funeral was paid for by his friend Hannen Swaffer, and he was buried alongside his father at St. Mary's Church in Ilford.[96]