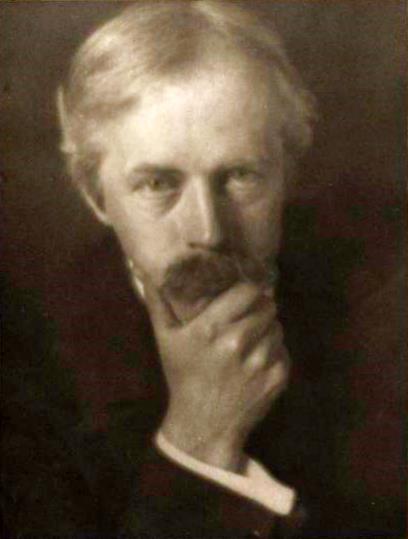 Born in Milford Haven, Wales, to Cornish parents, Symons was educated privately, spending much of his time in France and Italy. In 1884–1886 he edited four of Bernard Quaritch's Shakespeare Quarto Facsimiles, and in 1888–1889 seven plays of the ""Henry Irving" Shakespeare. He became a member of the staff of the Athenaeum in 1891, and of the Saturday Review in 1894,[1] but his major editorial feat was his work with the short-lived Savoy.

His first volume of verse, Days and Nights (1889), consisted of dramatic monologues. His later verse is influenced by a close study of modern French writers, of Charles Baudelaire, and especially of Paul Verlaine. He reflects French tendencies both in the subject-matter and style of his poems, in their eroticism and their vividness of description.[1] Symons contributed poems and essays to The Yellow Book,, including an important piece which was later expanded into The Symbolist Movement in Literature, which would have a major influence on William Butler Yeats and T. S. Eliot. From late 1895 through 1896 he edited, along with Aubrey Beardsley and Leonard Smithers, The Savoy, a literary magazine which published both art and literature. Noteworthy contributors included Yeats, George Bernard Shaw, and Joseph Conrad. Symons was also a member of the Rhymer's Club founded by Yeats in 1890.[2]

In 1892, The Minister's Call,, Symons's first play, was produced by the Independent Theatre Society – a private club – to avoid censorship by the Lord Chamberlain's Office.[3]

In 1902 Symons made a selection from his earlier verse, published as Poems.. He translated from the Italian of Gabriele D'Annunzio The Dead City (1900) and The Child of Pleasure (1898), and from the French of Émile Verhaeren The Dawn (1898). To The Poems of Ernest Dowson (1905) he prefixed an essay on the deceased poet, who was a kind of English Verlaine and had many attractions for Symons.[1] In 1909 Symons suffered a psychotic breakdown, and published very little new work for a period of more than twenty years. His Confessions: A Study in Pathology (1930) has a moving description of his breakdown and treatment.

In 1918, Vanity Fair magazine published Symons' Baudelarian essay, "The Gateway to an Artificial Paradise: The Effects of Hashish and Opium Compared." On one occasion between 1889 and 1895, John Addington Symonds, Ernest Dowson, and "some of Symons’ lady friends from the ballet all tried hashish during an afternoon tea given by Symons in his rooms at Fountain Court."[4]