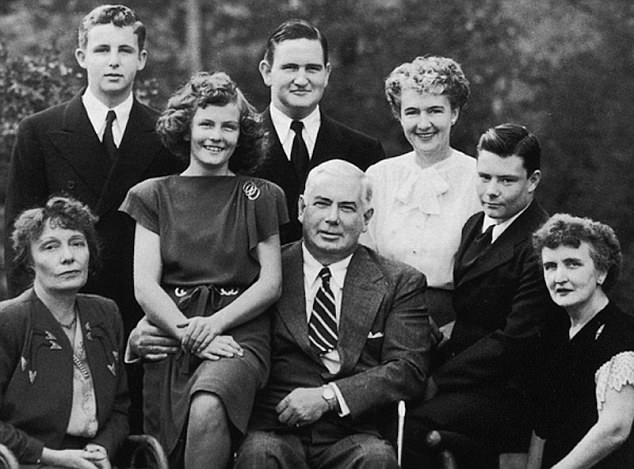 William Moulton Marston (May 9, 1893 – May 2, 1947), also known by the pen name Charles Moulton, was an American psychologist who, with his wife Elizabeth Holloway, invented an early prototype of the lie detector. He was also known as a self-help author and comic book writer who created the character Wonder Woman.[1]

He was inducted into the Comic Book Hall of Fame in 2006.

Marston was born in the Cliftondale section of Saugus, Massachusetts, the son of Annie Dalton (née Moulton) and Frederick William Marston.[4][5] Marston was educated at Harvard University, graduating Phi Beta Kappa and receiving his B.A. in 1915, an LL.B. in 1918, and a PhD in Psychology in 1921. After teaching at American University in Washington, D.C., and Tufts University in Medford, Massachusetts, Marston traveled to Universal Studios in California in 1929, where he spent a year as Director of Public Services and taught at the University of Southern California.[6]

Marston had two children each with both his wife Elizabeth Holloway Marston and partner Olive Byrne.[7] Elizabeth gave birth to a son, Pete, and a daughter, Olive Ann. Olive Byrne gave birth to two sons. Elizabeth supported the family financially while Olive Byrne stayed home to take care of all four children.[7]

Marston was the creator of the systolic blood pressure test, which became one component of the modern polygraph invented by John Augustus Larson in Berkeley, California. Marston's wife, Elizabeth Holloway Marston, suggested a connection between emotion and blood pressure to William, observing that, "[w]hen she got mad or excited, her blood pressure seemed to climb".[8]

Although Elizabeth is not listed as Marston's collaborator in his early work, Lamb, Matte (1996), and others refer directly and indirectly to Elizabeth's own work on her husband's research. She also appears in a picture taken in his laboratory in the 1920s (reproduced by Marston, 1938).[9][10]

Marston set out to commercialize Larson's invention of the polygraph, when he subsequently embarked on a career in entertainment and comic book writing and appeared as a salesman in ads for Gillette Razors, using a polygraph motif. From his psychological work, Marston became convinced that women were more honest than men in certain situations and could work faster and more accurately. During his lifetime, Marston championed the latent abilities and causes of the women of his day.

Marston was also a writer of essays in popular psychology. In 1928, he published Emotions of Normal People, which elaborated the DISC Theory. Marston viewed people behaving along two axes, with their attention being either passive or active, depending on the individual's perception of his or her environment as either favorable or antagonistic. By placing the axes at right angles, four quadrants form, with each describing a behavioral pattern:

Marston posited that there is a masculine notion of freedom that is inherently anarchic and violent and an opposing feminine notion based on "Love Allure" that leads to an ideal state of submission to loving authority.

On October 25, 1940, an interview conducted by his partner Olive Byrne (under the pseudonym "Olive Richard") was published in The Family Circle (titled "Don't Laugh at the Comics"), in which Marston said that he saw "great educational potential" in comic books. (A follow-up article was published two years later in 1942.[11]) The interview caught the attention of comics publisher Max Gaines, who hired Marston as an educational consultant for National Periodicals and All-American Publications, two of the companies that would later merge to form DC Comics.

In the early 1940s, the DC Comics line was dominated by superpower-endowed male characters such as the Green Lantern and Superman (its flagship character), as well as Batman, with his high-tech gadgets.

According to the Fall 2001 issue of the Boston University alumni magazine, it was the idea of Marston's wife, Elizabeth Holloway Marston, to create a female superhero. Marston recommended an idea for a new kind of superhero, one who would conquer not with fists or firepower, but with love. "Fine," said Elizabeth. "but make her a woman."[12][13]

Marston introduced the idea to Max Gaines, co-founder with Jack Liebowitz of All-American Publications. Given the go-ahead, Marston developed Wonder Woman, basing her character on the unconventional, liberated, powerful modern women of his day.[1][14] Marston's pseudonym, Charles Moulton, combined his own and Gaines's middle names.

In a 1943 issue of The American Scholar, Marston wrote: "Not even girls want to be girls so long as our feminine archetype lacks force, strength, and power. Not wanting to be girls, they don't want to be tender, submissive, peace-loving as good women are. Women's strong qualities have become despised because of their weakness. The obvious remedy is to create a feminine character with all the strength of Superman plus all the allure of a good and beautiful woman."[15]

In 2017, a majority of Marston's personal papers arrived at the Schlesinger Library at the Radcliffe Institute for Advanced Study; this collection helps to tell the backstory of "Wonder Woman," including his unorthodox personal life with two idealistic and strong women, Olive Byrne and Elizabeth Marston, with a connection to Margaret Sanger, one of the most influential feminists of the twentieth century.[16]

Marston's character was a native of an all-female utopia of Amazons who became a crime-fighting U.S. government agent, using her superhuman strength and agility, and her ability to force villains to submit and tell the truth by binding them with her magic lasso.[17] Her appearance was believed by some to be based somewhat on Olive Byrne, and her heavy bronze bracelets (which she used to deflect bullets) were inspired by the jewelry bracelets worn by Byrne.[18]

After her name "Suprema" was replaced with "Wonder Woman," which was a popular term at the time that described women who were exceptionally gifted, the character made her debut in All Star Comics #8 in December 1941. Wonder Woman next appeared in Sensation Comics #1 (January 1942), and six months later, Wonder Woman #1 debuted.[17] Except for four months in 1986, the series has been in print ever since. The stories were initially written by Marston and illustrated by newspaper artist Harry Peter. During his life Marston had written many articles and books on various psychological topics, but his last six years of writing were devoted to his comics creation.