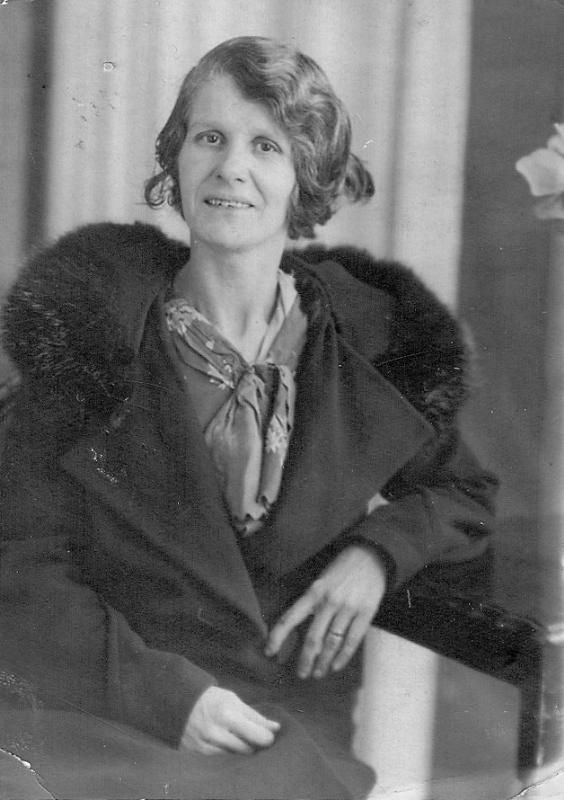 Elizabeth Holloway Marston (February 20, 1893 – March 27, 1993)[1] was an American attorney and psychologist. She is credited, with her husband William Moulton Marston, for the development of the systolic blood pressure measurement used to detect deception.[2][3]

She is also credited as the inspiration for her husband's comic book creation Wonder Woman, a character who was also fashioned on their polyamorous life partner, Olive Byrne.[2][4][5][6][7][8]

Marston was born Sarah Elizabeth Holloway in the Isle of Man and raised in Boston, Massachusetts. Her nickname was "Sadie".[6] She was the daughter of an English mother, Daisy, and William George Washington Holloway, an American bank clerk.[9] She received her B.A. in psychology from Mount Holyoke College in 1915 [2] and her LLB from the Boston University School of Law in 1918,[10][11][6] where she was "one of three women to graduate from the School of Law that year."[2]

Marston enrolled in the master's degree program at Radcliffe College while her husband William attended the doctoral program in psychology at Harvard, which at that time enrolled only male students. She worked with William on his thesis, which concerned the correlation between blood pressure levels and deception. He later developed this into the systolic blood-pressure test used to detect deception that was the predecessor to the polygraph test.[2]

In 1921, Marston received her MA from Radcliffe and William received his PhD from Harvard. Although Marston is not listed as William's collaborator in his early work, a number of writers refer directly and indirectly to Elizabeth's work on her husband's blood pressure/deception research. She appears in a picture taken in his polygraph laboratory in the 1920s, reproduced in a 1938 publication by William.[2][12][13]

Elizabeth and William married in 1915. She first gave birth at age 35, then returned to work. During her long and productive career, she indexed the documents of the first fourteen Congresses, lectured on law, ethics, and psychology at several American universities, and served as an editor for Encyclopædia Britannica and McCall's. She cowrote a textbook, Integrative Psychology, with her husband and C. Daly King. In 1933, she became the assistant to the chief executive at Metropolitan Life Insurance.[2][4]

Sometime in the late 1920s, Olive Byrne, a young woman William had met while teaching at Tufts University, joined the household. Marston had two children, Pete and Olive Ann, while Byrne also gave birth to two of William's children, Byrne and Donn. The Marstons legally adopted Olive's boys, but Olive remained a part of the family, even after William's death in 1947.[2][4]

Olive stayed home with the children while Marston worked. Continuing at MetLife until she was sixty-five, Elizabeth put all four children through college and Byrne through medical school and Donn through law school as well. She and Olive continued living together until Olive's death in the late 1980s.[2][4] Both Olive and Marston "embodied the feminism of the day."[14]

Her 1993 obituary also stated that she contributed to the development of Wonder Woman,[2][15] while Lillian S. Robinson argued that both Olive Byrne and Elizabeth were models for the character.[16][17]

Marston's life is depicted in Professor Marston and the Wonder Women, a fictional biographical drama also portraying her husband William Moulton Marston, Olive Byrne, and the creation of Wonder Woman.[19] Marston is portrayed in the film by British actress Rebecca Hall.[18]