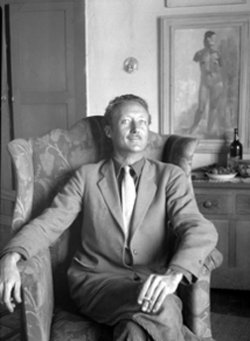 Nicknamed Spud by his family, Johnson was born in Illinois, but spent most of his childhood in Greeley, Colorado. Uninterested in his father's lumber business, Spud took every journalistic opportunity offered. He started and edited a newspaper at Greeley High School before entering Colorado State Teacher's College in 1916, where he wrote for the school paper and worked as a cub reporter for the Greeley newspaper.

After two years at the Teachers College and a shorter stint at the University of Colorado in Boulder, Johnson began to feel constrained by the “small-town” life in Colorado and transferred to the University of California at Berkeley. Shortly after arriving in the Bay area, he met Witter Bynner, a wealthy poet who taught a popular poetry course at UCLA. By 1920 Bynner was no longer teaching at the University, but he had maintained his rooms in the Carlton Hotel. Bynner helped Johnson find a library job at the Bohemian Club and encouraged him to write poetry. The two men developed a close and lasting friendship.

For the next several years, Johnson juggled school with journalism. He found that he did not like being on the receiving end of the editorial process and in 1922, with two friends (Roy Chanslor and James Van Rensselaer, Jr.), founded his own small format magazine, Laughing Horse. Intended as an alternative to conventional campus publications, the four editors presented "...polemics, philippics, satire, burlesque and all around destructive criticism...." Even after leaving Berkeley, Johnson continued to contribute to Laughing Horse, eventually taking it over and publishing it intermittently over the next thirty years.

In the summer of 1922, Johnson visited New Mexico for the first time. Attracted by the beauty and charm of the area as well as the growing literary community, Johnson did not return to school, but remained in Santa Fe as Witter Bynner's secretary. Through Bynner, Johnson met almost everybody in the New Mexico literary scene including Mary Austin, Carl Sandburg, Mabel Dodge Luhan, D.H. Lawrence and Frieda Weekley von Richthofen, and Dorothy Brett. Motivated by the artistic climate and the available time, Johnson began to write poetry again and by 1926 his work had been published in Poetry, Pan, Echo, Palms, and the New Republic. He published a collection of his works in 1935, titled Horizontal Yellow.

Spud Johnson inspired the character of Villiers in The Plumed Serpent of D.H. Lawrence. While they were all living in Chapala, Johnson typed the first 108 pages of the manuscript of Quetzalcoatl. Johnson printed several of Lawrence's essays in the Laughing Horse.

Aside from poetry, Johnson maintained a steady stream of literary criticism, editorial comments, and other prose. In 1927 he moved to Taos to become Mabel Luhan's secretary and purchased a small hand press which he used to print Laughing Horse. Though Spud Johnson was editing the journal long-distance from Sante Fe, The Laughing Horse was nominally being published at the University of California, and the UC administration viewed each issue with growing alarm. Finally, with the fourth issue, which appeared in December of 1923, the University felt it had to act, and banned the publication from the campus.

Spud Johnson bought the house that is now called Laughing Horse in the late 1920s. Spud's little Taos house at the curve of the road became a bed and breakfast establishment, the Laughing Horse Inn.

By the early 1930s Johnson had become a fixture in the New Mexico literary and social scenes. Dividing his time between Santa Fe and Taos he participated unflaggingly in community affairs and causes.

In the spring of 1936, Count Michel de Buisseret visited Taos, New Mexico and developed an instant crush on Johnson. The two men had first met over drinks with mutual friends at a bar. Later, they became reacquainted at Florence McCormick’s dinner party. After dinner when the dancing began, the two men slipped into the hallway to dance with each other while the other guests remained “in the living room.” They left the party early to visit Michel’s hotel room where they engaged in sexual activity

Johnson supported himself with his writing and his printing press and during World War II he ran a bookstall near the Taos central plaza. One of his most durable activities was an editorial column which ran under the title "The Horse Fly" and later as "The Gadfly." Sometimes he published his column as a free-standing small paper and at other times he published in local papers.

Johnson remained active until his death in 1968. In 1953 he took up painting and drawing and in 1954 he travelled to Europe with Earl Stroh. While in France he met Alice B. Toklas before travelling on to Italy and England. In 1960 he helped organize and lead a week long rafting trip through Glen Canyon before it was flooded by construction of the Glen Canyon Dam. In early 1968 he was cooperating with a group of friends to produce a show of his artwork for the following year. When he died, just months before the show was scheduled to take place, it became a memorial for an artist for whom life and art were never separated.