Violet Mary Williams-Freeman Hammersley (1877-1962) was an Edwardian socialite. Later in life, Violet Hammersley recalled an evening party she had organized decades before, for which she had sent invitations to "those who understood and loved music." Besides Gervase Elwes, Percy Grainger, and "a sprinkling of elegance from the diplomatic world," the company included Victor Beigel, who comforted his hostess when the guest of honor, the great mezzo-soprano Camilla Landi (who had consented to sing "for an enormous fee"), stormed out of the salon, muttering, "These people are all stockbrokers - I do not sing to stockbrokers."

She was born Violet Mary Williams-Freeman in 1877, the daughter of William Peere Williams-Freeman (1834-1884) of Clapton (aka Clopton), Northants, a diplomat, and Isabel Frances Merivale (d. 1911), the daughter of Herman Merivale, CB, Permanent Under-Secretary of State for India. Her much older husband was Arthur Hammersley (1856-1912), a banker, son of Hugh Hammersley (1819-1882). They were married in 1902 and had three children: Christopher (b. 1903), David (b.1904) and Monica (b. 1907). Arthur Hammersley had a son, Hugh (b.1892), and three daughters (Gwendolen, Cynthia and Doris) from his first marriage to Mary Louisa Campbell. In The Plantagenet Roll of the Blood Royal, you can trace Violet's descent from Lionel of Antwerp, Duke of Clarence, second son of Edward III. 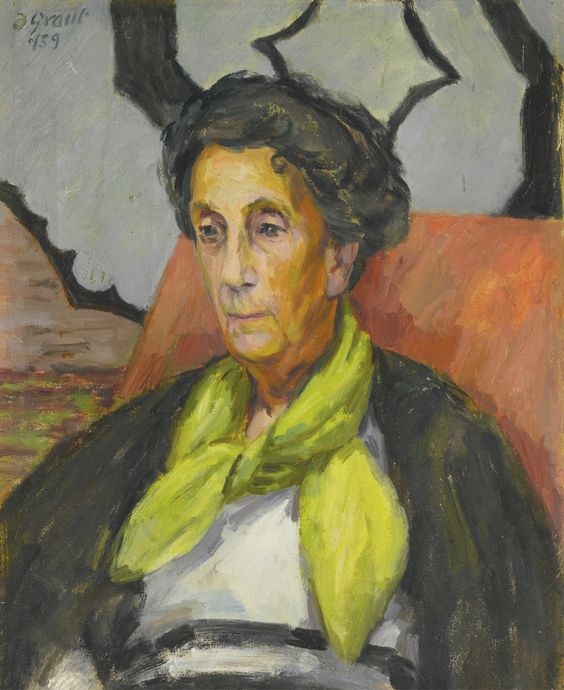 PORTRAIT OF MRS HAMMERSLEY IN A GREEN SCARF, by Duncan Grant

Violet was a prominent figure in the lives of the famous Mitford family. Diana, Lady Mosley shared memories of Mrs. Hamm or the Widd, as the young Mitfords dubbed her: "'She was rather small and very dark, with black hair and huge dark eyes, and she had an expression of deep gloom. She had a rather low, hollow voice, and although she often laughed it was as if unwillingly. When I first knew her she was already a widow, and widow's weeds became her. To the end of her life she was swathed in black scarves and shawls and veils; in later years not exactly in mourning, because many of her clothes were dark brown, but the whole effect had something more Spanish than French about it. Once when she was slightly annoying my sister Nancy, who used the powder and lipstick universal among our generation, by saying: "Painters don't admire make-up at all," Nancy retorted: "Oh well Mrs. Ham you know it's all very well for you, but we can't all look like El Greco's mistress." Mrs. Hammersley gave he hollow, unwilling laugh." Mosley goes on. "She had the most beautiful, delicately made hands, and she was a talented pianist. Her long drawing room had a grand piano at each end and she loved to play duets with musical friends. On one slender, ivory finger she wore a diamond and emerald ring shaped like a fleur-de-lys. We all craved it, and I am sorry to say we never hesitated, as children, to exclaim, "Oh Mrs Ham! Your ring! You are so lucky," or even, "Mrs. Ham, when you die will you leave me your ring? Please do." At a very early age we discovered the potency of the word 'lucky' when applied to Mrs. Hammersley. She considered herself the unluckiest person alive, and reacted accordingly to our reiterated cries. Working on a book, Nancy went to stay with her at Wilmington, Totland Bay, Isle of Wight; rationing was still at its most stringent. Nancy wrote to me: "The Widow [Violet Hammersley] performs the dance of the seven veils for the butcher, but he never gives us anything." We had just killed a bull calf on the farm, and I wrote asking whether I should post a few pounds of veal. A telegram handed in at Totland Bay arrived; it contained the one word "Yes". Mrs. Ham was famous for her short telegrams.' Hers was the charm of sharp intelligence, wonderful elegance, and a real and deep interest in every aspect of the lives of her friends." Another favorite Mitford story of Mrs. Hamm, is when young Unity inquired as to where Mrs. Hamm was journeying too. The answer was Rome, to which Unity beamed, "OH HOW LUCKY....where will you roam to?".

Nancy Mitford writes: "My parents seldom had friends to stay. One exception was Violet Hammersley, who came on prolonged visits. 'Mrs Ham' was a near contemporary of Muv [Lady Redesdale] but seemed much older. She was born and had spent the first years of her life in Paris, where her father Mr Freeman-Williams, was a diplomat. When he died, Mrs Freeman-Williams took her young family to live in London, where Muv remembered her as a friend of her own father. Mrs Ham was an unexpected friend of my mother: her circle was intellectual and artistic - from Somerset Maugham to Bloomsbury and beyond - while Muv was taken up with children and domestic affairs. We called her 'the Widow' or 'Wid', not to her face, but when it occasionally slipped out she put on the expression of resignation usually reserved for Nancy's teases. By the time I knew her, her late husband's bank had failed and Mrs Ham's means were much reduced... In spite of the difference in generations, Mrs Ham became an intimate friend of my sisters and mine because of her deep interest in our doings. Mrs Ham provided a wonderful subject for Duncan Grant and his two portraits of her are among my treasured possessions."