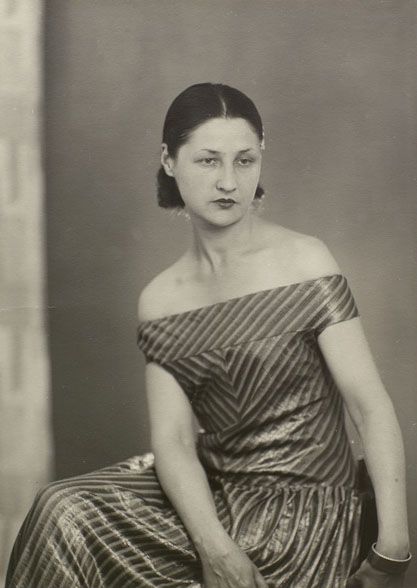 Valentine Penrose (née Boué; 1 January 1898 – 7 August 1978), was a French surrealist poet, author, and collagist. Lesbian love is an important theme in much of Penrose's work, but especially in Dons des féminines. Lesbian love is indeed a crucial theme in the book because it recounts the romantic escape of two women and their dreamlike adventures together. In addition, the author-collagist mentions the city of "Mytilene" to evoke the Sapphic island of Lesbos. This reference to the Mediterranean shows that exoticism is an important theme of the work, but also that Penrose inscribes herself into the Sapphic tradition of Renée Vivien, Natalie Barney or Charles Baudelaire to just a few emblematic figures [18].

Valentine Boué was born in 1898 to a military family in Mont-de-Marsan, Landes, France. The family moved to Paris when she was very young.[1]

In 1925 she married the English artist, historian and poet Roland Penrose and joined the community of surrealists based in Paris, Mougins and England. The marriage was never consummated.[2] Valentine and her husband moved to Spain in 1936 during the Spanish Civil War. In the same year she joined the workers militia in Spain to defend the revolution.[3] Valentine and Roland had different viewpoints on traditions in India, Eastern thought, and philosophy, which all led to a growing distance between the two.[4] They were divorced in 1937, but met again in London during the war, after which she lived half her time with her ex-husband and his second wife, the American photojournalist Lee Miller. This arrangement continued for the rest of her life.[1][5]

Valentine Penrose first encountered surrealism in the late 1920s. Penrose was one of the first of four women to become involved in the surrealist movement. [7] Penrose was involved in the publication of Andre Breton's inaugural issue of La Révolution surréaliste;[6] she was one of eight other women who were involved with the journal. Her first publication in the journal was a response to the 1929 Inquiry on love in La Révolution surréaliste no. 12.[6] Penrose was an independent woman who pushed against the social expectations set on her; as a woman she was expected to be a muse and object for male surrealist artists.[6]

Penrose was interested in female mysticism, Eastern philosophy,[7] Western mysticism,[10] alchemy and the occult. In Egypt she met Vicente Galarza y Pérez Castañeda, knows as Count Galarza de Santa Clara, a master of the esoteric,[11] and made several visits to his ashram in India. She studied Sanskrit while in India.[7] In 1936 she made an extended visit to India with the poet and painter Alice Rahon (later wife of Wolfgang Paalen). They become very close and their relationship is shown in their poetry from 1936 to about 1945.[1][12][13] It is believed that the two had a relationship while in India based on the lesbian attributes present in their work at that time.[14] After their trip in India, they didn’t see each other again.

From 1937 she started writing on lesbianism, always with the same lovers: Emily and Rubia. This dominates Martha's Opéra (1945), and Dons des Féminines (1951).[1] Penrose's work was admired by Paul Éluard, who wrote prefaces for her first collection Herbe à la lune (1935) and Dons des féminines (1951).[15] The works in Dons des féminines were greatly inspired by Alice Rohan.[14] She also knew the surrealist poet André Breton.[16]

In 1957 she traveled to Tenerife, welcomed by the marriage formed by the art critic Eduardo Westerdahl and Maud Bonneaud.

She died on 7 August 1978 in Chiddingly, East Sussex, England, in the house of her ex-husband.