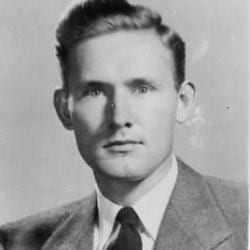 Phillips was born on October 11, 1922 on a farm between Corinth and Kossuth in Alcorn County, northeastern Mississippi.[1][2]

He was one of five sons and a daughter born to William Thomas Phillips, a farmer of English descent, and Ollie Fare Phillips, a schoolteacher with Scottish and Irish ancestry. The family moved in the 1940s to Kossuth so that the children might gain a better education.[2][3] After schooling in Kossuth, Phillips attended Hinds Junior College.[4]

Phillips served in the United States Navy in the Mediterranean during World War II, after obtaining a degree in social science from Mississippi State University in 1943.[5]

After the war, he used the G.I. Bill to finance a master's degree in writing at the University of Alabama, which resulted in a thesis that later became his first novel, The Bitterweed Path.[2] His adviser was Hudson Strode and the thesis won Phillips a Julius Rosenwald Fellowship in 1947 and the Eugene F. Saxton Award in 1948.[5]

Upon completion of his degree in 1948, Phillips taught for two years at Southern Methodist University in Dallas, Texas. He was able to study in France in 1950 when he was awarded a Fulbright Fellowship.[3][5]

Shortly after being awarded the Howells Medal in American Literature, William Faulkner received as visitors Thomas Hal Phillips and Ernest E. Leisy, faculty members at Southern Methodist University, in Dallas, Texas. Phillips wrote about the visit for the Dallas Morning News. A native of Mississippi himself, Phillips described a view of Faulkner completely in line with his public persona as a shy, reclusive farmer living a simple life in the Mississippi hill country. Phillips’s only subjective appraisal of the great man in what is otherwise a narrative of his visit depicts Faulkner as free from the confines of being “tamed into a drawing room lion: He remains an individual, a great one I think, a lover of the Deep South who has seen more clearly than anyone else the South’s virtues as well as its social disintegrations and decay.” Significantly, these themes also inform Phillips’s own novels, primarily The Bitterweed Path, which was published almost simultaneously with his visit to Rowan Oak. In fact, a review of Phillips’s novel was scheduled to appear in the Dallas Morning News the week after his Faulkner essay, according to the editor’s note that appeared with Phillips’s story. The Bitterweed Path takes the implicitly homoerotic material Faulkner explored in Absalom, Absalom! between the generations of male Sutpens and makes it the focus of an explicitly homosexual narrative.

Phillips's first novel – The Bitterweed Path – was first published in hardback in 1950 by Rinehart & Company and was advertised, at the time, as "something new in the literature dealing with man's love for man ... in a period when even psychologists knew little of such matters, and people in small towns knew nothing."

The book depicts the struggles of two gay men in the Southern United States at the turn of the 20th century, and how an unconventional love triangle involving these two men, and one of their fathers, impacts their three marriages in small-town, Deep South. The book's theme was notable in an era of repression, and even more so for coming from a particularly repressive state.[6][7]

Phillips, for whom Corinth-based writer Henry Dalton was a mentor,[4] was awarded a Guggenheim Fellowship for work in fiction in 1953 and again in 1956.[8] His next four books, including another – Kangaroo Hollow – that had a queer theme, were less successful than the first, even though they were well-received by literary critics.[7] These literary efforts had been in part subsidised by his investment in his brother Frank's trucking business.[2]

Around 1958-1960,[a] Phillips was appointed to the Mississippi Public Service Commission to fill the vacancy created by the resignation of his younger brother, attorney Rubel Phillips. He resigned that post in 1963 so that he could help Rubel in what proved to be an unsuccessful Republican gubernatorial campaign.[4]

According to Courtney Chartier, Thomas Phillips managed that campaign and another unsuccessful attempt by Rubel in 1967.[6] However, Jan Stuart says that Thomas wrote speeches and literature for Rubel but was himself a "dyed-in-the-wool" Democrat:

To the young Tom, Franklin Delano Roosevelt was God. He would later admire, if not exalt, JFK, Jimmy Carter and, despite the blotch of scandal and impeachment, William Jefferson Clinton.[2]

The film rights to Phillips's 1955 novel The Loved and the Unloved were sold[4] and in the 1960s, he began working with Hollywood director Robert Altman. He contributed in various capacities to films such as Thieves Like Us (1974, associate producer),[9] The Autobiography of Miss Jane Pittman and Nashville.[1][10]

He was a consultant for Ode to Billy Joe in 1976, when he was the first chairman of the Mississippi Film Commission.[7]

Phillips, who never married,[7] spent much of his post-military life living alternately between California and Corinth, where he usually resided at the Phillips Brothers Truck Stop that he and Frank had opened in 1960.[4] He died on April 3, 2007 in Kossuth, aged 84.[6]