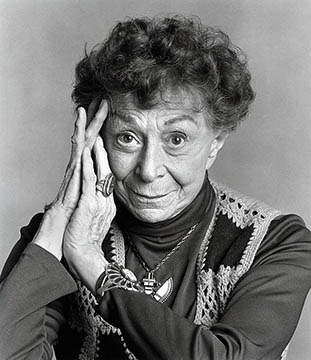 Bernhard was born in Berlin and studied at the Berlin Academy of Art from 1925–27.[1] By 2 years old her parents were divorced and she only met her mother twice afterwards. [2]She was raised by two schoolteacher sisters and their mother.[3] Bernhard's father, Lucian Bernhard, was known for his poster and typeface design, many of which bear his name and are still in use.

Bernhard studied art history and typography at the Academy of Fine Arts, Berlin before moving to New York to join her father.[4] She began teaching on an ongoing basis at the University of California in 1958, while also giving lectures, classes and workshops all over the United States.[5]

IIn 1927 Bernhard moved to New York City, where her father was already living. She worked as an assistant to Ralph Steiner in Delineator magazine, but he terminated her employment for indifferent performance. She used her severance pay to finance her own photographic equipment.[6] By the late-1920s, while living in Manhattan, Bernhard was heavily involved in the lesbian sub-culture of the artistic community, becoming friends with photographer Berenice Abbott and her lover, critic Elizabeth McCausland. Her first realization that she was attracted to other women occurred on New Year's Eve 1928 when she met the painter Patti Light.[7] She wrote about her "bisexual escapades" in her memoir.[8] In 1934 Bernhard began photographing women in the nude.[9] It would be this art form for which she would eventually become best known.[10] In 1935, she chanced to meet Edward Weston on the beach in Santa Monica.[11] She would later say;

II was unprepared for the experience of seeing his pictures for the first time. It was overwhelming. It was lightning in the darkness...here before me was indisputable evidence of what I had thought possible—an intensely vital artist whose medium was photography.

Bernhard was so inspired by Weston’s work that, after meeting him in 1935, she moved to California (where he lived). In 1939, Bernhard moved back to New York for eight years, during which time she met photographer Alfred Stieglitz.[12]

Though many people were unaware of this, Bernhard produced the photography for the first catalog published by the Museum of Modern Art in New York City. The name of this exhibition was "The Art of The Machine." Her father Lucian Bernhard set up the meeting with MoMA for her.

By 1944 she had met and became involved with artist and designer Eveline (Evelyn) Phimister. The two moved in together, and remained together for the next ten years. They first moved to Carmel, California, where Bernhard worked with Group f/64. Soon, finding Carmel a difficult place in which to earn a living, they moved to Hollywood where she fashioned a career as a commercial photographer. In 1953, they moved to San Francisco[10] where she became a colleague of photographers such as Ansel Adams, Imogen Cunningham, Minor White, and Wynn Bullock.

Most of Bernhard's work is studio-based, ranging from simple still lifes to complex nudes. In the 1940s she worked with the conchologist Jean Schwengel.[13] She worked almost exclusively in black-and-white, though there are rumours that she had done some color work as well. She also is known for her lesbian themed works, most notably Two Forms (1962). In that work, a black woman and a white woman who were real-life lovers are featured with their nude bodies pressed against one another.[10]

A departure was a collaboration with Melvin Van Peebles (as "Melvin Van"), then a young cable car gripman (driver) in San Francisco. Van Peebles wrote the text and Bernhard took the unposed photographs for The Big Heart, a book about life on the cable cars.

In the early 1980s, Bernhard started to work with Carol Williams, owner of Photography West Gallery in Carmel, California. Bernhard told Williams that she knew there would be a book of her photography after her death, but hoped one could be published during her lifetime. Williams approached New York Graphics Society, and several other photographic book publishers, but was advised that "only Ansel Adams could sell black-and-white photography books." Bernhard and Williams decided to sell five limited edition prints to raise the necessary funds to publish a superior quality of book of Ruth Bernhard nudes. The ensuing edition was produced by David Gray Gardner of Gardner Lithograph, (also the printer of Adams's books) and was called The Eternal Body. It won Photography Book of the Year in 1986 from Friends of Photography. This book was often credited by Ruth Bernhard as being an immeasurable help to her future career and public recognition. The Eternal Body was reprinted by Chronicle Books and later as a deluxe limited Centennial Edition in celebration of Ruth Bernhard's 100th birthday in October, 2005. Carol Williams credited Ruth Bernhard with encouraging her to venture into book publishing, and later published several other photographic monographs.

In the 1980s Bernhard also started to work with Joe Folberg. Folberg bought Vision Gallery from Douglas Elliott (who founded it in 1979) in San Francisco in 1982. Bernhard and Folberg worked together until Folberg's death. The gallery split with Debra Heimerdinger taking over operations in North America and Folberg's son Neil moving the "Vision Gallery" to Jerusalem.

In 1967, Bernhard began a teaching career. This same year, Bernhard met United States Air Force Colonel Price Rice, an African American man ten years younger than her, and the two became lovers. They would remain together until his death in 1999. In her 90s, Bernhard cooperated with biographer Margaretta K. Mitchell in the book Ruth Bernhard, Between Art and Life, publicly revealing her many affairs with women and men throughout her lifetime.[14]

In 1984 Ruth worked with filmmaker Robert Burrill on her autobiographic film entitled, Illuminations: Ruth Bernhard, Photographer. The film premièred in 1989 at the Kabuki theater in San Francisco and on local PBS station KQED in 1991.

Bernhard was inducted into the National Women's Caucus for Art in 1981. Bernhard was hailed by Ansel Adams as "the greatest photographer of the nude".[15]