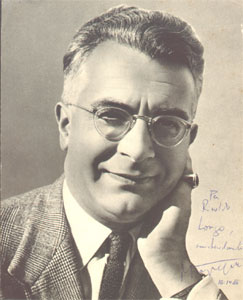 Roger Peyrefitte (17 August 1907 – 5 November 2000) was a French diplomat, writer of bestseller novels and non-fiction, and a defender of gay rights.

Born in Castres, Tarn, to a wealthy family, Peyrefitte went to Jesuit and Lazarist boarding schools and then studied language and literature in the University of Toulouse. After graduating first of his year from Institut d'Études Politiques de Paris in 1930, he worked as an embassy secretary in Athens between 1933 and 1938. Back in Paris, he had to resign in 1940 for personal reasons before being reintegrated in 1943 and finally ending his diplomatic career in 1945. In his novels, he often treated controversial themes and his work put him at odds with the Roman Catholic church.

He wrote openly about his homoerotic experiences in boarding school in his 1943 first novel Les amitiés particulières (Particular Friendships—a term used in seminaries to refer to friendships seen as too close and exclusive, often incorrectly translated as "Special Friendships"), which won the coveted prix Renaudot in 1944. The book was made into a film of the same name which was released in 1964. On the set, Peyrefitte met the 12-year-old Alain-Philippe Malagnac d'Argens de Villèle;[1] Peyrefitte tells the story of their relationship in Notre amour ("Our Love" - 1967) and L'Enfant de cœur ("Child of the Heart" - 1978). Malagnac later married performer Amanda Lear.

A cultivator of scandal, Peyrefitte attacked the Vatican and Pope Pius XII in his book Les Clés de saint Pierre (1953), which earned him the nickname of "Pope of the Homosexuals". The publication of the book started a bitter quarrel with François Mauriac. Mauriac threatened to resign from the paper he was working with at the time, L'Express, if it did not stop carrying advertisements for the book. The quarrel was exacerbated by the release of the film adaptation of Les amitiés particulières and culminated in a virulent open letter by Peyrefitte in which he accused Mauriac of homophile inclinations and called him a tartuffe.[2] In April 1976, after Pope Paul VI had condemned homosexuality in a homily, Peyrefitte accused him of being a closet homosexual.[3]

In his memoirs, Propos Secrets, he wrote extensively about his youth, his sex life (homosexual mainly and a few affairs with women), his years as a diplomat, his travels to Greece and Italy[4] and his troubles with the police for sexually harassing male teenagers. He also gave vent to his fierce love of snobbish genealogizing and vitriolic well-documented gossip, writing about famous people of his time such as André Gide, Henry de Montherlant, Jean Cocteau, Jean Genet, Marcel Jouhandeau, Marie-Laure de Noailles, Gaston Gallimard, Jean-Paul Sartre, Charles de Gaulle, and Georges Pompidou, among many others. Claiming he had reliable sources within the Vatican's "black aristocracy", once again he stated that three recent popes of the 20th century were homosexuals. He particularly loved to expose the hypocrisy and vanity of prominent people, to denounce fake aristocrats and to out closeted homosexuals.

Roger Peyrefitte wrote popular historical biographies about Alexander the Great and Voltaire. In Voltaire et Frédéric II he claimed that Voltaire had been the passive lover of Frederick the Great.

In spite of his libertarian views on sexuality, politically Peyrefitte was a conservative bourgeois and in his later years he supported extreme right-winger Jean-Marie Le Pen.[5]

He died of Parkinson's disease at age 93 after receiving the last rites from the Catholic Church he had attacked so constantly.[6]

After his death, the city of Capri dedicated a plaque to him which is mounted near Villa Lysis and the inscription of which reads: A Roger Peyrefitte autore de L'esule di Capri per aver esaltato e diffuso il mito, la cultura e la bellezza dell'isola nel mondo. — "For Roger Peyrefitte, author of L'Exile de Capri, for having exalted and diffused the myth, the culture, and the beauty of this island in the world."[7]

In a 2012 essay about the importance of public libraries, English actor and writer Stephen Fry mentions that Peyrefitte’s novels The Exile of Capri and Special Friendships were "unforgettable, transformative books" for him.[8]