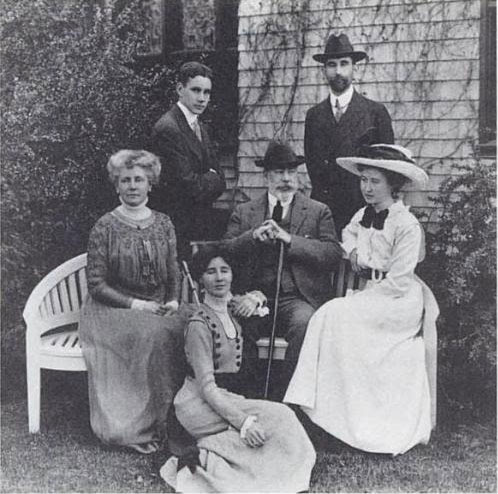 Olivia Cutting James (September 5, 1892 – March 12, 1963) was the daughter of William Bayard Cutting (1850–1912) and Olivia Peyton Murray (1855–1949). William Bayard Cutting,[1] a member of New York's merchant aristocracy, was an attorney, financier, real estate developer, sugar beet refiner and philanthropist. Cutting and his brother Fulton started the sugar beet industry in the United States in 1888. He was a builder of railroads, operated the ferries of New York City, and developed part of the south Brooklyn waterfront, Red Hook.

Olivia Murray Cutting married Henry James (1879–1947), a Pulitzer Prize winner and the son of psychologist William James, in 1917.[15] James himself, has been suggested by Michael Anesko, was queer. The couple were rather hastily married, the bride would have preferred to elope and avoid a public ceremony altogether, but some who knew them already had misgivings about the union. A few weeks after the wedding, as Henry's mother was on board a ferry en route to Maine, she encountered Katherine Loring (who had been the long-time female companion of her sister-in-law, Alice James), who pointedly congratulated her on Harry's "good marriage". Pricked by Loring's ironic tone, Mrs James defensevely "said it was all that" and that she was a "fortunate woman" to have Olivia for a daughter-in-law. But six months after their marriage, Harry James discovered that his wife was lesbian.

When Olivia and Henry divorced, Dorothea Draper, sister of Ruth Draper, became the second wife of Henry James. She was the widow of Linzee Blagdon, a New York financier and close friend of James from college days at Harvard. Dorothea and Ruth's other sister, Martha Lincoln Draper, became the female companion of Olivia Cutting.

Olivia Cutting James built a small prefab summer house on top of a hill overlooking the Hop and across from the Cobble in Tyringham. She lived with her companion, Martha Draper, in a very simple way. The driveway up to the house was very steep only drive able by the Model A Ford coupe with rumble seat that was kept in her garage. They purchased one of the first prefabricated portable houses and had it set up among the apple trees on a lovely piece of property. They named it "Portapple". Serious, intelligent, and forthright, Martha was gently spoken, quite mannish in dress and manner, but in no way masculine. She was "tweedy" and "smoked like a chimney," a gold clip of a cigarette holder almost constantly on her thin bony hand. Not at all pretty, Martha, in later years, had a pudgy full face and lips. She was small and strong. Martha spent long summers there driving about the countryside in her Model A Ford. She ice-skated with the children, cut and tidied the three stumps in the woods, tramped about in knickers, and helped to wash the dishes. She was an outdoor person who loved the land and the trees and the stars, so attuned to nature that she always said she thought she could feel the earth spinning.

Next to Olivia James lived Beulah Cannon, who owned and ran the Orchard House Inn. During the summer elderly ladies and a few gentleman would spend the summer there. During her forty-two years of operation, distinguished names in literature, art, music, finance, diplomacy and society were entered in her register. Soon after Orchard House opened as an Inn, Alice Hegan Rice came there to write "Mrs. Wiggs of the Cabbage Patch". In 1912 Jean Webster, niece of Mark Twain, made a two week reservation, only to stay six months and write the book, "Daddy Long Legs". The next year she returned with Anne Crawford Flexner (Mrs. Abraham) to dramatize it. During the Institute of Politics at Williams College, Behulah Cannon opened her inn to twelve different nationalities attending the Institute. For many years Olivia James was a frequent guest and even after she built "Port Apple" near by, she continued as a dinner guest. The 22-room Orchard House was in the Cannon family for a century and a half. Beulah Cannon, after 40 years, closed the business in 1945 and sold it in 1949.

​The Great River Estate, known as "Westbrook" originally consisted of over one thousand acres. Only part of this area was deeded to the State of New York. ​In 1938, Mrs. Bayard James donated an additional three hundred eighty-two acres, and her mother, Mrs. William Bayard Cutting, established an endowment of over $1,000,000 for the maintenance of the arboretum. In November 1949, Mrs. Olivia Murray Cutting passed away and her daughter, Olivia Bayard James, continued running the estate until 1952 when the arboretum management was fully transferred to the Long Island State Park and Recreation Commission, which at the time was headed by Robert Moses.