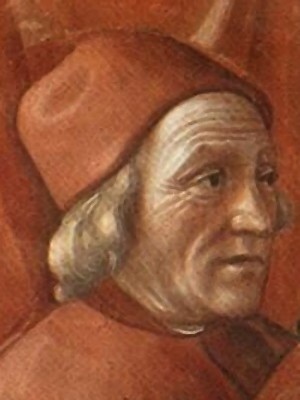 Marsilio Ficino (October 19, 1433 – October 1, 1499) was an Italian humanist and philosopher. The son of a medical doctor, Ficino was a student of philosophy. The flight to Italy of Byzantine scholars after the fall of Byzantium in 1453 provided Italian humanists with the opportunity to discover Greek works which were then unknown in the West; thus, young Ficino discovered and developed a passion for Plato, learning Greek in order to study his works. Ficino earned the patronage of the Médicis, who protected and aided him throughout his life, and who gave him precious Greek manuscripts (which Ficino translated). In short, Ficino became a well known and respected cultural figure, gathering around himself a number of students at his Platonic Academy.

In 1473 Ficino was ordained a priest; he continued his philosophical work and undertook the onerous task of proving that Plato's philosophy was in harmony with Christian doctrine, just as Thomas aquinas had done in the case of Aristotle. Among his most important works are Theologia platonica (published in 1482), as well as strictly religious works (Commentarius in Epistolas D. Pauli), philosophical commentaries (Commentarius in Platonis Convivium, published in the Platonic form of a dialogue in 1469) and an impressive number of translations of the works of Plato and other Greek philosophers. These translations made such works accessible to Western readers for the first time. Ficino is thus one of the most important figures in the Renaissance. His fame is linked to his loving and meticulous work in rediscovering, translating, commenting on and disseminating the works of Plato.

Of particular interest here is Ficino's restatement of Plato's ideal of love (as appears in the Phaedrus and the Symposium); in Ficino's wake, this would be taken up in countless sixteenth-century treatises on love to become the model of ‘courtly love’ par excellence. Under the name of amor socraticus (Socratic, or Platonic, love) or verus amor (true love), Ficino described a model of profound but highly spiritualised love between men who were linked by a common love for knowledge. According to Ficino's formulation in the Commentarius in Platonis Convivium, this love is illuminated by a vision of the beauty of the soul of the other person, a beauty which is itself a mirror of the Beauty of God. Through the physical beauty of a young man – women are unfit to inspire this sort of passion, and more apt to stimulate coition for the reproduction of the species – the wise man attains to the absolute Beauty which is an idea (in the Platonic sense) of the beauty which is God himself. Thus, the contemplation through love of the physical and spiritual beauty of a youth is a means of contemplating at least a fragment of the Beauty of God, the model for all earthly beauty.

Ficino practised his theory of love with the young and very handsome Giovanni Cavalcanti, whom he made the principal character in his commentary in the Convivium, and to whom he wrote passionate love letters in Latin (published in 1492 in his Epistulæ). It is ironic that Ficino's beloved, as the philosopher himself lamented, responded with some embarrassment as if he had reservations about the true purety of amor socraticus.

There are numerous indications – not least these letters – which suggest that Ficino's erotic desire was directed towards men. Biographers had to begin soon after Ficino's death to rebuke those who alluded to his homosexual tendencies. However, during his life, the universal respect which Ficino enjoyed, his deeply felt and sincerely religious feelings and, also, his status in the Catholic clergy, sheltered him from the gossip and suspicions of sodomy which afflicted his later followers (such as Benedetto Varchi). Furthermore, several men whose homosexuality is now a subject of debate formed part of Ficino's circle, among them Giovanni Pico della Mirandola and Angelo Poliziano.

After Ficino's death, the ideal of amor socraticus showed itself to be a powerful argument for justifying love between persons of the same sex, a screen which served numerous homosexual figures in the late fifteenth and early sixteenth centuries, among them Leonardo da Vinci and Michelangelo Buonarrotti. This helped to discredit such an ideal in the eyes of the public, and it was viewed with ever-increasing discomfort with the passing of time, until, around 1550, amor socraticus was identified solely with sodomy. In consequence, in the mid-sixteenth century, the ideal of Platonic love was carefully heterosexualised, and in this form it survived in treatises on love and in Italian and European letters in general.