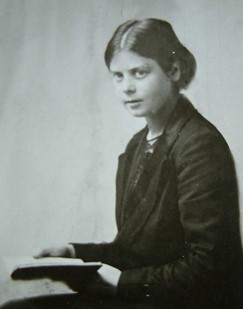 Marion Richardson was born on 9 October 1892 in Ashford, Kent, the second daughter of Walter Marshall Richardson and his wife, Ellen.[1]

She was the middle of three sisters, and apparently used to entertain the other two with stories after lights out in the bedroom which they shared. She often serialised these over many nights. She joined a story-writing group when still a child – her nom de plume was 'A Mere Girl'.[2]

In the holidays, her family rented a cottage from E. Nesbit, the author who wrote 5 Children and It, and there Marion discovered and enjoyed Nesbit's collection of books.

Richardson was educated at Winchester High School for Girls, Uplands School, and Milham Ford School in Oxford.[3] She trained to be an art teacher at Birmingham Municipal School of Arts and Crafts from 1908-1912 where she studied under Robert Catterson Smith who influenced her future work.[4]

During her training she was a pupil teacher at Moseley School of Art, where she also worked as a Junior Assistant Teacher.[5] From 1912 to 1923, Richardson was the art mistress at Dudley Girls High School.[1] In 1915-1916 she published a drawing syllabus which was similar to the standard Board of Education drawing programme, but within a year she began to encourage her pupils to produce work with little instruction.[4] She developed her own child-centred methods for teaching art which encouraged self-expression and allowed the pupils to evaluate their own work.

In 1917, her pupils' work was exhibited by Roger Fry, who brought her work to public attention.[1] Richardson was also close to his sister, Margery Fry, who encouraged her to teach art in prisons, including Winson Green prison in Birmingham.

In 1923, Richardson moved to London where she took private pupils and taught voluntarily at Holloway prison.[1] An exhibition of her Dudley pupils' artwork in London in 1923-1924 attracted much interest and created a greater demand for her work. In 1924 she visited schools and prisons with her pupils' work in Sweden, Finland and Russia.[1] In 1924 she returned to Dudley part-time and lectured at the London Day Training College to trainee art teachers. She also taught at part-time at Benenden School, Kent, and Hayes Court School, Oxford.[1]

In 1930 she was appointed the inspector of art to the London County Council and continued to run courses for art teachers.[6] She toured Canada in 1934 and in 1935 published Writing and Writing Patterns, a set of hinged cards and booklets for teaching handwriting. In 1938 she organized a large and successful exhibition of children's art at County Hall in London.

Her last work Art and the Child was published posthumously in 1948, and was a great success.[1] Sir Kenneth Clark wrote in his introduction that "I believe that I recognise the same tone of voice which I hear in the dialogues of St. Catherine of Sienna."[7]

Her influence remained after her death and her Writing and Writing Patterns was still used in schools in the 1980s.[1] The Senrab Street School in Stepney, east London was renamed Marion Richardson Primary School in her memory.[8]

In 2012 an exhibition at Dudley Museum and Art Gallery celebrated her work.[10]

The personal papers of Marion Richardson are held in the Birmingham City University Art and Design Archives.[11]