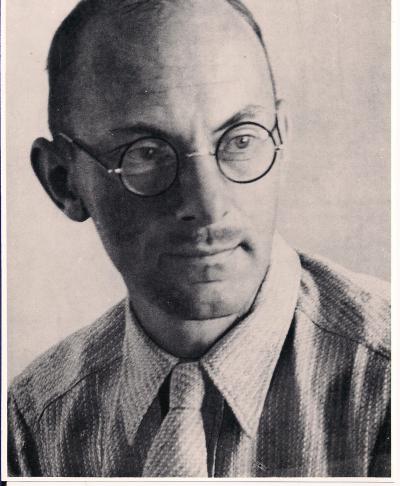 Ludwig Renn (22 April 1889 in Dresden – 21 July 1979 in Berlin) was a German author. Born a Saxon nobleman, he later became a committed communist and lived in East Berlin.[1]

Ludwig Renn was the assumed name of Arnold Vieth von Golßenau who was born into a noble Saxon family whose family seat was in Golßen (Niederlausitz). He adopted the name Ludwig Renn in 1930, after becoming a communist, renouncing his noble title and taking the name of the hero of his first successful novel, Krieg (1928). His mother, Bertha, maiden name Raspe (1867 – 1949) was the daughter of a Moscow apothecary, whilst his father, Carl Johann Vieth von Golßenau (1856 – 1938), was a teacher of mathematics and physics at the Royal Court of Saxony in Dresden. Through him, Ludwig Renn came to know the Crown Prince of Saxony, Prince Friedrich August Georg von Sachsen (1865 – 1932), later King Friedrich August III, who was destined to be the last King of Saxony after the 1918 Revolution.[2]

From 1911 Renn served as an officer in a prestigious Saxon Guards Regiment, where he served under his friend Prince Friedrich August. Between 1914 and 1918 he fought in the First World War as a company commander, and a field battalion commander on the Western Front. His first book, Krieg (War), which appeared in 1928 brought him wide acclaim. After the war he was a captain in the Dresden security police, a paramilitary force set up during the Weimar Republic.[3] In 1920 during the Kapp Putsch, Renn refused to open fire upon striking revolutionary workers and left the police service shortly afterwards. This is recounted in the novel Nachkrieg (1930) but confirmed as a fact by some sources.[4]

From 1920 to 1923 Renn studied law, economics, history of art and Russian philology in Göttingen and Munich. In 1923 he worked as an art dealer in Dresden during the time of hyperinflation.

During 1925 and 1926 Renn undertook a journey on foot through Europe and the Near East. In 1927 he undertook further studies in archaeology, art history and Chinese history in Vienna, returning to Germany in the same year to give lectures to workers on the history of China and Russia at the Volkshochschule Zwickau.[2]

In 1928, the year in which he published Krieg, Renn became a member of the German Communist Party, a step which the novel Nachkrieg (1930) reflects.[1] In the same year he joined the Roter Frontkämpferbund (‘Alliance of Red Front-Fighters’) and from 1928 to 1932 was secretary of the Alliance of Proletarian-Revolutionary Writers in Berlin (BPRS). Renn was editor of the communist journal, Linkskurve and the communist military police journal, Aufbruch.[2] His work for the BPRS brought him into close contact with, amongst others, Anna Seghers and Johannes R Becher.[5]

Renn's growing commitment to communism saw him travel to the USSR in 1929 and 1930. Renn found himself increasingly under attack from the National Socialists and decided to renounce his noble title in 1930, adopting the name of the hero of his novel, Krieg: Ludwig Renn. Between 1931 and 1932 he was a lecturer on the history of warfare and military theory at the Marxist Workers’ School (MASCH) in Berlin.[2] His books Nachkrieg (1930) and Rußlandfahrten (1932) made him the most important German communist writer of the inter-war period.[6]

In 1933 following the burning of the Reichstag, new laws designed to strengthen Aldolf Hitler’s rise to power were passed and Renn was arrested together with Carl von Ossietzky und Ernst Torgler and sentenced to 30 months imprisonment in January 1934.

On his release in August 1935 he travelled to Spain where from July 1936 he joined the International Brigades in support of the Spanish Republican cause as Chief of Staff for the XI International Brigade and the 35th Division.[7] During his service in Spain he spent time with Ernest Hemingway. He wrote an account of his time in his work, Der spanische Krieg (1955) but was unable to name Hemingway, referring to him only as 'an American' because of the ideological condemnation of Hemingway's work in the DDR at the time.[8]

After the defeat of the Spanish Republicans Renn travelled into exile in Mexico, from 1939 to 1947, where he served as president of the Free Germany movement (Freies Deutschland).[2] During this time he promoted the use of the internationalist language Esperanto and the Ludwig Renn Archive at the Academy of the Arts, Berlin, holds several of his translations into Esperanto from foreign languages.[9]

In 1947 he returned to Germany, settling once more in Dresden which was then in the Soviet Occupation Zone and from 1949 part of the DDR. Here he was director of the Kulturwissenschaftliches Institut and held a chair in anthropology at the Dresden Technical University from 1947 to 1951.[1]

From 1952 Renn lived in East Berlin where he was a freelance writer and a member of the German Academy of the Arts. He also worked as a Spanish–German translator.[2]

On his return from exile in Mexico in 1947 Renn settled at first in Dresden with his partner Max Hunger (1901 – 1973). In 1949 they were joined by Hans Pierschel (1922 – 1994) and the three men then moved in 1952 to Berlin-Kaulsdorf where they lived together for the rest of their lives. They were buried together in the same grave in the central Friedrichsfelde Cemetery, the last resting place of many social-democratic, socialist and communist politicians and activists.