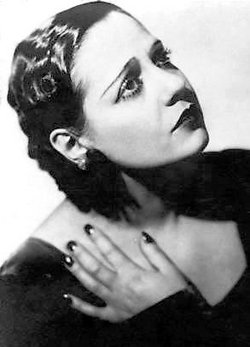 Lucienne Boyer (18 August 1901 – 6 December 1983)[1] was a French diseuse[2] and singer, best known for her song "Parlez-moi d'amour". Her impresario was Bruno Coquatrix. In the 1920s Chez Fysher attracted more and more lesbians. The star until 1927 was Gaby Montbreuse, a busty redheaded singer whose biggest success was You possessed me by surprise. Fisher's stars that followed were: Yvonne George, Damia, Marie Dubas, Arletty, Lucienne Boyer, Lys Gauty, Gaby Basset.

Lucienne Boyer was born as Émilienne-Henriette Boyer in the Montparnasse Quarter of Paris, France. Boyer lost her soldier father in World War I and had to go to work in a munitions factory to help her family get by. Her melodious voice gave her the chance, while working as a part-time model, to sing in the cabarets of Montparnasse. An office position at a prominent Parisian theater opened the door for her and within a few years she was cast as Lucienne Boyer, singing in the major Parisian music halls.

In 1927, Boyer sang at a concert by the great star Félix Mayol where she was seen by the American impresario Lee Shubert who immediately offered her a contract to come to Broadway. Boyer spent nine months in New York City, returning to perform there and to South America numerous times throughout the 1930s. By 1933 she had made a large number of recordings for Columbia Records of France including her signature song, "Parlez-moi d'amour". Written by Jean Lenoir, the song won the first-ever Grand Prix du Disque of the Charles Cros Academy.

In 1939, she married the cabaret singer Jacques Pills of the very popular duo Pills et Tabet. Their daughter Jacqueline, born on 23 April 1941, followed in their footsteps, becoming a very successful singer who won the 1960 Eurovision Song Contest. Throughout World War II, Boyer continued to perform in France, but for her Jewish husband, it was a very difficult time. Following the Allied Forces liberation of France, her cabaret career flourished and for another thirty years, she maintained a loyal following. At the age of 73, she sang with her daughter at the famous Paris Olympia and appeared on several French television shows.

She died in Paris, and was interred in the Cimetière de Bagneux in Montrouge, near Paris.