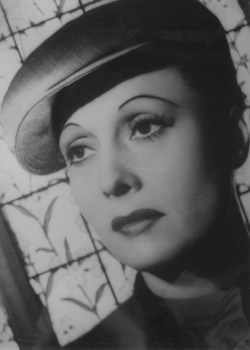 Léonie Marie Julie Bathiat (15 May 1898 – 23 July 1992[1]), known professionally as Arletty, was a French actress, singer, and fashion model. She was found guilty of treason for an affair with a German officer during World War II, but she continued her career which included playing Blanche in the French version of A Streetcar Named Desire. In the 1920s Chez Fysher attracted more and more lesbians. The star until 1927 was Gaby Montbreuse, a busty redheaded singer whose biggest success was You possessed me by surprise. Fisher's stars that followed were: Yvonne George, Damia, Marie Dubas, Arletty, Lucienne Boyer, Lys Gauty, Gaby Basset.

Arletty was born in Courbevoie (near Paris), to a working-class family. After her father's death, she left home and pursued a modeling career. She took the stage name "Arletty" based on the heroine of a story by Guy de Maupassant. She was not interested in acting until she met Paul Guillaume, an art dealer. He recommended some theaters and, at the age of 21, she was hired.[2] Her early career was dominated by the music hall, and she later appeared in plays and cabaret. Arletty was a stage performer for ten years before her film debut in 1930. Arletty's career took off around 1936 when she appeared as the leading lady in the stage plays Les Joies du Capitole and Fric-Frac, in which she starred opposite Michel Simon. She later starred as Blanche in the French version of A Streetcar Named Desire.[3] Marcel Carné was known for his poetic realism filmmaking style. Arletty's minor role of Raymonde in his film, Hotel du Nord, garnered attention for her "Atmosphere! Atmosphere!” performance. In 1945 Arletty appeared in her most famous film role, the central part of Garance in Les Enfants du Paradis, her fourth role for the director. For this role she earned one of the highest salaries ever in French cinema.[4]

Arletty was imprisoned in 1945 for her wartime liaison with a German Luftwaffe officer, Hans-Jürgen Soehring,[5] during the occupation of France. She allegedly later commented on the experience, "My heart is French but my ass is international."[6] The quotation in French is, "Si mon cœur est français, mon cul, lui, est international" and the word "cul" is also translated "sex." The French version of Wikipedia says the phrase was suggested by Henri Jeanson, but is perhaps apocryphal. Although other French women fell in love with German soldiers, her romantic affiliation with Soehring during the German occupation prompted a charge of treason. James Lord wrote of her special treatment: Arletty was too well known for the mere humiliation of having her head shaved, her naked skull tarred with a swastika and in this abject state paraded through the streets to confront the jeers and spittle of the mob. Prison would be none too good for her, people said, looking forward to severe retribution for the moral treason of which they found her guilty.[2] For her crimes she received a sentence of eighteen months imprisonment, most of which was served in a private chateau.

After a moderately successful period as a stage actress in later life she was forced to retire into private life due to progressive loss of her eye sight. One of her final screen appearances was in a small role as an elderly French woman in The Longest Day (1962). After her death in 1992, Arletty was cremated, and her ashes interred in her hometown at the Nouveau Cimetière de Courbevoie.[7]

In 1995 the government of France issued a series of limited edition coins to commemorate the centenary of film that included a 100 Franc coin bearing the image of Arletty.[8]