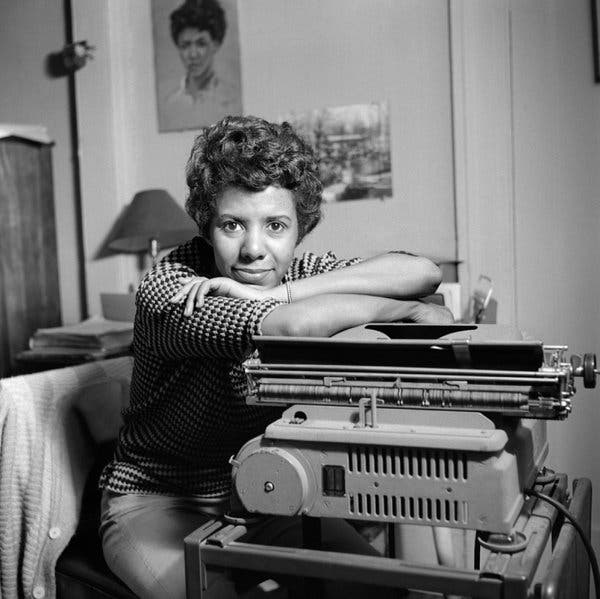 Hansberry was the first black female author to have a play performed on Broadway. Her best known work, the play A Raisin in the Sun, highlights the lives of Black Americans living under racial segregation in Chicago. Hansberry's family had struggled against segregation, challenging a restrictive covenant and eventually provoking the Supreme Court case Hansberry v. Lee. The title of the play was taken from the poem "Harlem" by Langston Hughes: "What happens to a dream deferred? Does it dry up like a raisin in the sun?"

At the young age of 29, she won the New York's Drama Critic's Circle Award — making her the first African American dramatist, the fifth woman, and the youngest playwright to do so.[3]

After she moved to New York City, Hansberry worked at the Pan-Africanist newspaper Freedom, where she dealt with intellectuals such as Paul Robeson and W. E. B. Du Bois. Much of her work during this time concerned the African struggle for liberation and their impact on the world. Hansberry has been identified as a lesbian, and sexual freedom is an important topic in several of her works. She died of cancer at the age of 34. Hansberry inspired Nina Simone's song "To Be Young, Gifted and Black".

On June 20, 1953,[10] she married Robert Nemiroff, a Jewish publisher, songwriter and political activist.[1] Hansberry and Nemiroff moved to Greenwich Village, the setting of The Sign in Sidney Brustein's Window. Success of the song "Cindy, Oh Cindy", co-authored by Nemiroff, enabled Hansberry to start writing full-time.[10] On the night before their wedding in 1953, Nemiroff and Hansberry protested the execution of Julius and Ethel Rosenberg in NYC.

It is widely believed that Hansberry was a lesbian, a theory supported by her secret writings in letters and personal notebooks.[18][19] She was an activist for gay rights and wrote about feminism and homophobia, joining the Daughters of Bilitis and contributing two letters to their magazine, The Ladder, in 1957 under her initials "LHN." She separated from her husband at this time, but they continued to work together.[20][21]

A Raisin in the Sun was written at this time and completed in 1957.