John Chute (December 30, 1701 - May 26, 1776) succeeded his brother in 1754. In a portrait by Gabriel Mathias in 1758 he is standing in front The Vyne's famous portico. He is wearing a sumptuous mauve coat, white satin and a gold embroidered waistcoat typical of a gentleman of the period. He is holding a drawing of his own for a redesign of the house in the Gothic style which he favoured. His friend Horace Walpole, of Strawberry Hill, called him 'my oracle of taste.' It was never actually built here but realised nearby at Donnington Grove, Newbury. W.S. Lewis mentions letters to Horace Walpole's "effeminate" friends, Horace Mann, John Chute, and George Montagu, not to mention Thomas Gray and Richard West. Like letters to Henry Seymour Conway, and like the Countess' letters to her son, we could read these letters as a riddle and imagine a hidden truth that Walpole has disguised in near-hysterical friendliness.

John Chute was the second son of Edward Chute. He succeeded his brother Anthony to The Vyne in Hampshire in 1754. Chute was the younger brother of an uncultivated boor and, until he succeeded to the estate, he lived for some years in Florence with a young cousin of striking good looks, Francis Whithed, whose portrait by Rosalba Carriera  one sees at the Vyne today. Whithed was an enchanting companion, a generation younger, gay and lively: the two were inseparable.

A friend of Horace Walpole and of Thomas Gray, he was an amateur architect with Gothic proclivities. He intended to Gothicise The Vyne, but did not carry this through and instead redesigned the Staircase in a classical style. He never married and was succeeded by a cousin through the female line, Thomas Lobb. As an architect he is best known for Donnington, the Gothic house near Newbury. 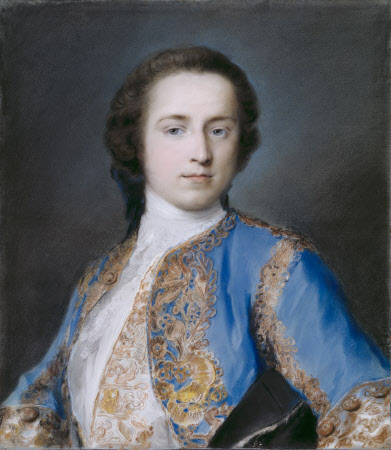 Francis Whithead was a cousin of John Chute (1701 - 1776) who inherited The Vyne in 1754. Whithed and Chute travelled together widely on the continent, and it was probably when they were in Venice in 1741 that Whithed sat for Rosalba Carriera, one of the greatest exponents of the pastel medium.

The tragedy of Chute's life was the early death of Francis. He intended to make him his heir, and had already arranged a marriage for him to an immense fortune. Francis was fond of the girls and in Italy had picked up a slight infection - as many in that age did. He may have been rather consumptive - his complexion had that flush, with over-bright eyes. Everybody loved him, "that best of hearts", as Horace Walpole called him; Chute lived an inconsolable life thereafter. Francis was only 31 when he died; no one ever took his place.