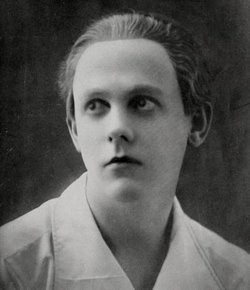 Jean Börlin was a Swedish dancer and choreographer born in Härnösand on March 13, 1893 and died in New York on December 6, 1930. He worked with Michel Fokine who was his teacher in Stockholm.[1]

Jean Börlin was held in high esteem by Michel Fokine, who will later say of the Swedish dancer "He is the one who looks the most like me! A natural! An ecstasy! The fanatic sacrifice of a bruised body to give the maximum of choreographic expression". Trained at the Royal Swedish Ballet, he joined the troupe in 1905 and was named first dancer by Fokine in 1913. He joined his master in Copenhagen in 1918, then traveled to Europe and discovered modern dance. [2]

Recommended by Fokine, he was recruited for the newly formed Ballets suédois by Rolf de Maré. This marked his first steps as a choreographer; the vast majority of Ballets suédois choreographies bear his name. He danced for the company at a time when it was in constant competition with Sergei Diaghilev's Ballets Russes. From 1920, he became principal dancer, teacher, ballet master and choreographer. Hailed by the French critics, Börlin is considered the successor of Vaslav Nijinsky.[3]

A close friendship developed between Rolf de Maré and Jean Cocteau; and on 18 June 1921 the company performed Les Mariés de la Tour Eiffel, the ballet that had resulted from a collaboration between Cocteau and the radical group of Modernist composers, Les Six. On one evening, Jean Börlin danced, on points, the role of the Bathing Girl without anyone noticing that this masked dancer was actually a man.

On 25 October 1923 Jean Börlin performed La Création du Monde and Within the Quota, the latter with a libretto by Gerald Murphy and music by Cole Porter.

Jean Börlin died of cancer in 1930 when he was only 37 years old. Even if he died in New York he asked to be buried back in Paris, at Père Lachaise Cemetery.[5]