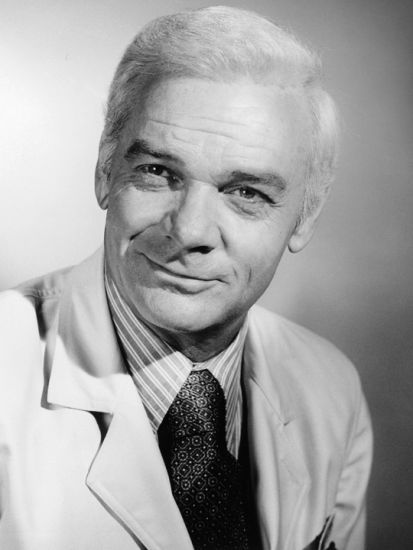 James Firman Daly (October 23, 1918 – July 3, 1978) was an American theater, film and television actor, who is perhaps best known for his role as Paul Lochner in the hospital drama series Medical Center, in which he played Chad Everett's superior.[1]

Daly was born in Wisconsin Rapids in Wood County in central Wisconsin, to a working-class family: his mother, Dorothy Ethelbert (Hogan) Mullen, later worked for the Central Intelligence Agency, and his father, Percifer Charles Daly, was a fuel merchant.[2] During the 1930s, Daly studied drama and acted in shows before he worked for the armed services, and served with the United States Navy as World War II ended.

Daly was a music major at the University of Wisconsin, a drama major at Iowa State University, and attended Carroll College before receiving a degree from Cornell College in Mount Vernon, Iowa.[3] Cornell College later presented him with an honorary Doctor of Fine Arts degree.[3]

Between 1953 and 1955 Daly appeared in the TV series Foreign Intrigue. He also guest starred on many television series, among them Appointment with Adventure (two episodes), Breaking Point, Mission: Impossible, The Twilight Zone ("A Stop at Willoughby"), The Tenderfoot (1964) for Walt Disney's Wonderful World of Color, The Road West (1966 episode "The Gunfighter"), Custer, Gunsmoke, Combat!, The Fugitive, The Virginian, and Twelve O'Clock High. He portrayed "Mr. Flint" (an apparently immortal human) in the Star Trek episode "Requiem for Methuselah" (1969).[4]

In 1958, Daly signed a contract with the R.J. Reynolds Tobacco Company to do television commercials for Camel cigarettes. He served as the Camel representative for seven years, being flown by Reynolds throughout the United States to be filmed smoking a Camel at various locations.[3]

Daly was also an accomplished stage actor, starting out in 1946 as Gary Merrill's understudy in Born Yesterday.[3] Among his starring Broadway roles were in Archibald MacLeish's Pulitzer Prize- winning J.B. and Tennessee Williams' Period of Adjustment.

In addition to his acting career, Daly was one of the hosts on NBC Radio's weekend Monitor program in 1963–1964.

Daly's last screen role was as "Mr. Boyce" in the mini-series Roots: The Next Generations.

According to his son Tim Daly during an interview on CBS News Sunday Morning, James Daly came out to Tim as gay a decade after divorcing his wife Hope. His struggle to come to terms with his sexual orientation nearly put a rift between him and his family. As homosexuality was still considered a mental illness until the early 1970s, he and his wife tried and failed at "curing" him. After their divorce, Daly decided to limit his contact with his children out of fear that they would end up mentally ill themselves.[5]

Two of Daly's children, Tyne Daly and Tim Daly, and his granddaughter, Kathryne Dora Brown, and grandson, Sam Daly, are actors. Tyne appeared on Daly's TV series, Foreign Intrigue, as a child. The elder Daly and his daughter both guest-starred separately in the original Mission: Impossible TV series. Tim appeared as a child with his father in Henrik Ibsen's play, An Enemy of the People. Daly had two other children: daughters, Mary Glynn and Pegeen Michael.[6]

Daly died on July 3, 1978, of heart failure in Nyack, New York,[6] two years after Medical Center ended, and while he was preparing to star in the play Equus in Tarrytown, New York.[7] His ashes were sprinkled into the Atlantic Ocean.