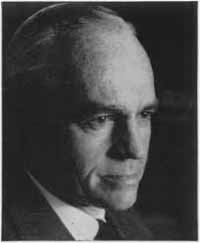 Joseph Edward Lumbard Jr. (August 18, 1901 – June 3, 1999) was a United States Circuit Judge of the United States Court of Appeals for the Second Circuit. He was involved in the Harvard Secret Court of 1920. Joseph Lumbard was a 19-year-old student who, in the Secret court of 1920's judgment, was "too closely connected" with others who had committed homosexual acts at Harvard, including his roommate, Edward Say, who was "deeply involved." Lumbard had come to terms with Say's odd behavior and showed him a measure of sympathy. For not segregating himself from his roommate's friends and for showing too much curiosity he was expelled. Not having committed a homosexual act, Lumbard gained readmission in 1921 and graduated from Harvard Law School in 1925. Harvard twice provided explanations for Lumbard's expulsion, once in 1931 when he was being considered for employment by the U.S. Attorney's office and again in 1953 when President-elect Dwight D. Eisenhower was considering him for a seat on the United States Court of Appeals. In the second case, at least, Harvard's registrar reported that he gave the FBI "the facts in the case clearing Lumbard of any question," saying that Lumbard had been expelled "solely because of association with the homosexual group spacially." Lumbard married in 1929. Better known as J. Edward Lumbard, he had a long and distinguished legal career in private practice and in government and died in 1999.

Born on August 18, 1901, in Harlem, New York City, New York, Lumbard attended DeWitt Clinton High School in The Bronx. He received an Artium Baccalaureus degree in 1922 from Harvard University and after attending the Fordham University School of Law received a Bachelor of Laws from Harvard Law School. In 1920, while an undergraduate at Harvard University, he was expelled by its "Secret Court" of 1920 for associating with a group of homosexuals, including his roommate. He was readmitted a year later.

During the Secret Court of 1920, trying to save himself, Lumbard testified against his rommate, Edward Say. He told the court that since the beginning of the year Say had become distant and secretive and started wearing rouge. He had heard rumors that his roommate had sexual relations with Eugene R. Cummings and Ned Courtney; he also admitted to knowing most of the core group of the accused. After two weeks of testimony, the court condemned fourteen men including seven current undergraduates and four men without any Harvard affiliation. Not only were the Harvard men expelled, they were ordered to leave immediately and then banished from Cambridge. All the students' families were sent letters telling them about why their sons were expelled from Harvard while the university's alumni office was instructed not to respond to any request regarding the expelled men without consulting the expulsion record. These men were marked for life. Not content with expulsion, Harvard contacted the deans of other schools to block Lumbard's attempts to transfer. The university eventually relented. He was allowed back at Harvard where he earned bachelor's and law degrees. However, the charges haunted Lumbard's otherwise brilliant law career and whenever asked for a reference, the university explained Lumbard's involvement in the scandal. Lumbard was eventually a member of the Harvard Board of Overseers but never talked about his year off.

Lumbard was nominated by President Dwight D. Eisenhower on May 13, 1955, to a seat on the United States Court of Appeals for the Second Circuit vacated by Judge John Marshall Harlan. He was confirmed by the United States Senate on July 11, 1955, and received his commission on the next day. He served as Chief Judge from 1959 to 1971. He was a member of the Judicial Conference of the United States from 1960 to 1971. He assumed senior status on July 20, 1971. His service terminated on June 3, 1999, due to his death in Fairfield, Connecticut.[3]

One landmark decision penned by Lumbard was Modern Settings v. Prudential (1991), which dealt with a dispute between an investor and a broker over alleged unauthorized trading.[4] The customer agreement between the parties provided "Reports of the execution of orders and statements of my account shall be conclusive if not objected to within five days and ten days, respectively, after transmittal to me (Modern Settings) by mail or otherwise." Lumbard held that such a contract clause is presumptively enforceable. It is reasonable to require that a customer memorialize his objections so courts will not become a forum for endless swearing contests between brokers and customers. On the other hand, he allowed for the possibility of the invalidity of such a clause in some cases. "There will be instances where a disparity in sophistication between a brokerage firm and its customer will warrant a flexible application of such written notice clauses.... Similarly, we do not foreclose the possibility that a broker may be estopped from raising a defense based on the written notice clause if the broker's own assurances of deceptive acts forestall the customer's filing of their required written complaint."

He declined a request from President Nixon to be the special prosecutor in the infamous Watergate scandal, a job that was later taken up by Archibald Cox.[5] In 1959, he was appointed to the Harvard Board of Overseers and served for ten years.[1] From 1964 to 1968, He was chairman of the American Bar Association's Committee to Develop Minimum Standards for Criminal Justice. In 1968, he was awarded the A.B.A.'s Gold Medal for his contributions to justice administration.[6]