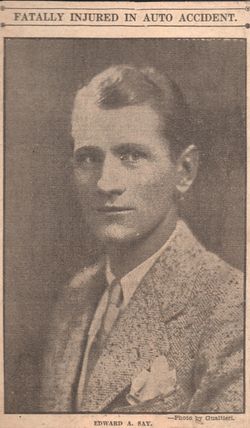 Edward Albert Say (June 10, 1900 - July 13, 1930) was involved in the Harvard Secret Court of 1920. He was a 20 years old and had a rather delicate constitution after spending years recovering from a spinal deformity. When he was involved in the gay purge at Harvard, known as the Secret Court of 1920, he insisted he had never engaged in any homosexual activity, though other witnesses before the court claimed that he had. After the court expelled him, he returned to Connecticut and worked as a securities salesman. He was active in his church and remained unmarried when he was killed in the crash of a car in which he was a passenger on July 13, 1930.

Kenneth Day implicated other students, including several already under suspicion: Harold Winfield Saxton, Edward Say, Ned Courtney, Harold Hussey, and Eugene R. Cummings, as well as giving up a new name, Nathaniel Wollf. Edward Say, a student with little documentation regarding his background, admitted to the court that he had a weekly masturbation habit but denied any homosexual liasons. But he also confessed to attending one party in Ernest Weeks Roberts' room back in November, which he had left in disgust. The court was very suspicious about Say, however, finding him effeminate and skeptical about his claim that an injury kept him from playing sports.

Trying to save himself, Joseph Lumbard testified against his rommate, Edward Say. He told the court that since the beginning of the year Say had become distant and secretive and started wearing rouge. He had heard rumors that his roommate had sexual relations with Cummings and Courtney; he also admitted to knowing most of the core group of the accused.

After two weeks of testimony, the court condemned fourteen men including seven current undergraduates and four men without any Harvard affiliation. Not only were the Harvard men expelled, they were ordered to leave immediately and then banished from Cambridge. All the students' families were sent letters telling them about why their sons were expelled from Harvard while the university's alumni office was instructed not to respond to any request regarding the expelled men without consulting the expulsion record. These men were marked for life.

Edward Say was killed in a car crash just outside Waterbury; he was a passenger in the car. Edward P. Michel, of Brooklyn, N. Y., was under the influence of liquor at the time of the automobile accident, in which Say was killed. Evidence at the inquest showed that the car tore down about 150 feet of fence after swerving from the highway. The machine crashed through a fence at the foot of Grace Hill, Ridgefield, and overturned. At the inquest Michel described himself as secretary to James M. Robertson of the National Industrial Conference Board.