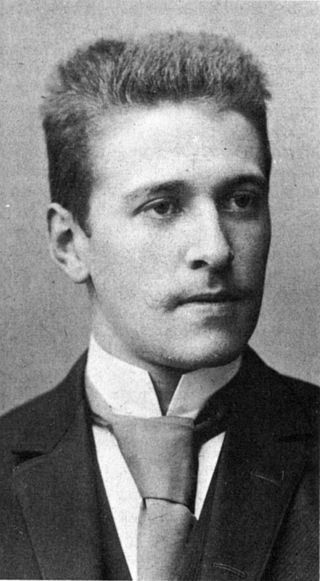 Hugo Laurenz August Hofmann von Hofmannsthal (German: [ˈhuːɡo fɔn ˈhoːfmanstaːl]; 1 February 1874 – 15 July 1929) was an Austrian prodigy, a novelist, librettist, poet, dramatist, narrator, and essayist. In Germany, Hugo von Hoffmannsthal admired and imitated Oscar Wilde’s aestheticism, but came to regard it as a dead end, perhaps especially after the events of 1895. His ambivalence extended to a 1905 essay, ‘Sebastian Melmoth’ (the name used by Wilde on heading into exile after his release from prison).

Hofmannsthal was born in Landstraße, Vienna, the son of an upper-class Christian Austrian mother, Anna Maria Josefa Fohleutner (1852–1904), and a Christian Austrian–Italian bank manager, Hugo August Peter Hofmann, Edler von Hofmannsthal (1841–1915). His great-grandfather, Isaak Löw Hofmann, Edler von Hofmannsthal, from whom his family inherited the noble title "Edler von Hofmannsthal", was a Jewish tobacco farmer ennobled by the Austrian emperor. He was schooled in Vienna at Akademisches Gymnasium, where he studied the works of Ovid, later a major influence on his work.[2] He began to write poems and plays from an early age. Some of his early works were written under pseudonyms, such as Loris Melikow and Theophil Morren, because he was not allowed to publish as a student. He met the German poet Stefan George at the age of seventeen and had several poems published in George's journal, Blätter für die Kunst. He studied law and later philology in Vienna but decided to devote himself to writing upon graduating in 1901. Along with Peter Altenberg and Arthur Schnitzler, he was a member of the avant garde group Young Vienna (Jung–Wien).

In 1900 Hofmannsthal met the composer Richard Strauss for the first time. He later wrote libretti for several of his operas, including Elektra (1909), Der Rosenkavalier (1911), the plot of which he developed together with Harry Graf Kessler, Ariadne auf Naxos (1912, rev. 1916), Die Frau ohne Schatten (1919), Die ägyptische Helena (1928), and Arabella (1929, but first performed 1933). In 1911 he adapted the 15th century English morality play Everyman as Jedermann, and Jean Sibelius (amongst others) wrote incidental music for it. The play later became a staple at the Salzburg Festival. During World War I Hofmannsthal held a government post. He wrote speeches and articles supporting the war effort, and emphasizing the cultural tradition of Austria-Hungary. The end of the war spelled the end of the Habsburg monarchy in Austria; this was a blow from which the patriotic and conservative-minded Hofmannsthal never fully recovered. Nevertheless, the years after the war were very productive ones for Hofmannsthal; he continued with his earlier literary projects, almost without a break. He wrote several new libretti for Richard Strauss operas. In 1920, Hofmannsthal, along with Max Reinhardt, founded the Salzburg Festival. His later plays revealed a growing interest in religious, particularly Roman Catholic, themes. Among his writings was a screenplay for a film version of Der Rosenkavalier (1925) directed by Robert Wiene.

In 1901 he married Gertrud "Gerty" Schlesinger, the daughter of a Viennese Jewish banker. Gerty converted to Christianity before their marriage, and they settled in Rodaun (now part of Liesing), not far from Vienna, and had three children: Christiane von Hofmannsthal (1902–1987), who married German indologist Heinrich Zimmer in early 1929. Zimmer taught at University of Greifswald, Heidelberg University, and Balliol College, Oxford. After they moved to New Rochelle, he became a visiting lecturer at Columbia University. Franz von Hofmannsthal (1903–1929), who committed suicide on 13 July 1929. Raimund von Hofmannsthal (1906–1974), who married Ava Alice Muriel Astor, daughter of John Jacob Astor IV and Ava Lowle Willing in 1933.[3] After divorcing Ava in 1939, Raimund later married Lady Elizabeth Paget, daughter of the 6th Marquess of Anglesey.[4] Two days after his eldest son committed suicide, shortly after attending Franz's funeral, Hugo himself died of a stroke at Rodaun. He was buried wearing the habit of a Franciscan tertiary, as he had requested.