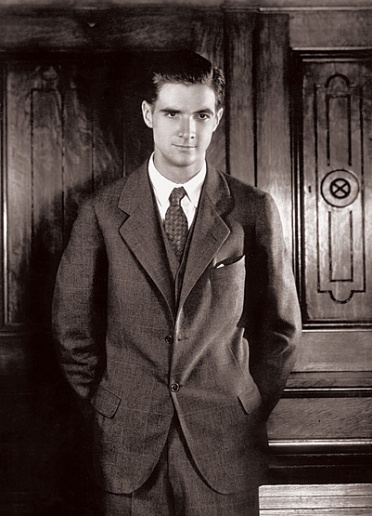 Howard Robard Hughes Jr. (December 24, 1905 – April 5, 1976) was an American business magnate, investor, record-setting pilot, engineer,[4] film director, and philanthropist, known during his lifetime as one of the most financially successful individuals in the world. He first became prominent as a film producer, and then as an influential figure in the aviation industry. Later in life, he became known for his eccentric behavior and reclusive lifestyle—oddities that were caused in part by a worsening obsessive–compulsive disorder (OCD), chronic pain from a near-fatal plane crash, and increasing deafness.

As a maverick film tycoon, Hughes gained fame in Hollywood beginning in the late 1920s, when he produced big-budget and often controversial films such as The Racket (1928),[5] Hell's Angels (1930),[6] and Scarface (1932). Later he controlled the RKO film studio.

Hughes formed the Hughes Aircraft Company in 1932, hiring numerous engineers and designers. He spent the rest of the 1930s and much of the 1940s setting multiple world air speed records and building the Hughes H-1 Racer and H-4 Hercules (the Spruce Goose). He acquired and expanded Trans World Airlines and later acquired Air West, renaming it Hughes Airwest. Hughes was included in Flying Magazine's list of the 51 Heroes of Aviation, ranked at No. 25.[7] Today, his legacy is maintained through the Howard Hughes Medical Institute and the Howard Hughes Corporation.[8]

Bisexual film director William Desmond Taylor, Mexican born film star Ramon Novarro, Spanish born star Antonio Moreno, and a teenaged Howard Hughes were all involved with each other sexually – sometimes all at the same time. Taylor was mesmerized by Hughes, who was attending a private school east of Santa Barbara, and planned to star him in a film custom tailored for him. Howard’s uncle, Rupert Hughes, a powerful Hollywood screen writer, was to write the script. It was Uncle Rupert who had introduced Howard to William Desmond Taylor. Included in their circle was silent film star Blanche Sweet, who regularly gave Howard blow jobs, marveling at the young man’s generous endowment. But it was Taylor who became completely obsessed with Howard. He knew he could make Hughes the biggest star in all of Hollywood, and he couldn't keep his hands off him. Unfortunately, Taylor was murdered in 1922, and the case remains one of the great unsolved mysteries of Hollywood. Immediately after Taylor’s funeral, Hughes abandoned plans to become a movie star.

One of the most important male affairs of Hughes was Dudley Sharp, who was later involved in an affair with Howard’s doting mother, who became pregnant by Dudley. Based in Houston, Allene (Howard’s mother) died from complications of the pregnancy, and a day later Dudley, Howard's boyfriend from just a few years before, attempted suicide. Howard was sixteen. Sharp later suffered the humiliation of having to ask Howard for money in order to continue his studies at Princeton. Hughes refused. Dudley Sharp later married and became U.S. Secretary of the Air Force under Eisenhower.

Still a teenager, Hughes had an affair with silent film star Billy Haines. Haines and Hughes forged a close friendship, even though Billy Haines was 100% gay and Hughes was bisexual. Billy knew everybody in Hollywood and made sure Hughes was invited to all the right parties.

According to Alan Royle, in 1937 Katharine Hepburn purchased her Turtle Bay, Manhattan townhouse for $33,000, and moved in with Howard Hughes at Muirfield Mansion in Los Angeles. Hughes usually slept in his study so Kate was allocated his former wife’s master bedroom. It was not lost on Kate that the only person who regularly shared his bed while she was living there was Cary Grant, who slept over about twice a week. At the time Hepburn was still sleeping intermittently with directors George Stevens and John Ford and her girlfriend Jane Loring, all without Hughes’ knowledge. He did not spy on Kate as he later would on Ava Gardner when she entered his life. Quite simply, sexually, the Hughes-Hepburn relationship held little interest for either of them. They just enjoyed each other’s company – while it lasted anyway.

Hughes is buried next to his parents at Glenwood Cemetery in Houston.[126]