Hortense Mitchell Acton (December 11, 1871 - November 1, 1962) was a rich heiress from Chicago, whose father was the founder of the Illinois Trust and Savings bank. When Hortense married Arthur Acton in 1903 they moved into the Villa La Pietra, on the via Bolognese in Florence and shortly afterwards she bought it for him.

Arthur Action attended the Ecole des Beaux-Arts in Paris. His roommate was Guy Hamilton Mitchell,, the son of a wealthy American, William Mitchell, who was founder of the Illinois Trust and Savings Company of Chicago. It was widely rumoured that in his youth Acton was bisexual, having an intimate relationship with Guy and the two being thought of in Paris as a couple. When they completed their studies, the two toured Italy for a year, taking up residence in Florence. Acton’s uncle, Henry O. Watson, helped him establish as an art dealer.

When Arthur Mario Acton first arrived in Florence in 1894 with Guy Mitchell, he established an antique store in Borgo Ognissanti, just a block off the Arno River, to the west of Florence’s historic center and around the corner from the tony Hotel Grand Britannia. He began selling objet d’art through several dealers in London and New York. But within a year of settling in Florence, the Oscar Wilde criminal trial resulted in unwanted public attention and intense scrutiny for any homosexual. To assuage family demands and offer some comfort, Guy suggested that Arthur marry his sister, Hortense, adding legitimacy to their relationship while affording them even better reason to continue seeing each other. Hortense Lenore Mitchell and Arthur Mario Acton were married in Chicago in June 1903. Guy Mitchell, less conflicted in his homosexuality as an adult, remained unmarried and lived a private gay life in the Villa il Giullarino.

Pale pink and black silk evening dress composed of a bodice and a skirt. Gold trim and black velvet belt. A black lace overlay covers the shoulders and the skirt. Surplice neckline on the front and back. Probably Callot Soeurs, around 1910-12. ©New York University, Acton Collection, Villa La Pietra. 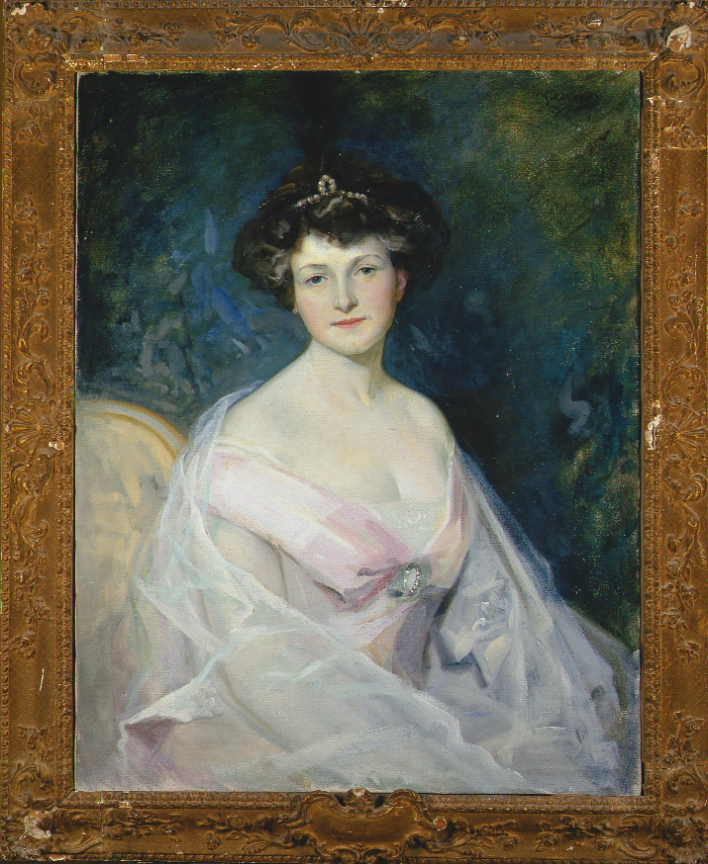