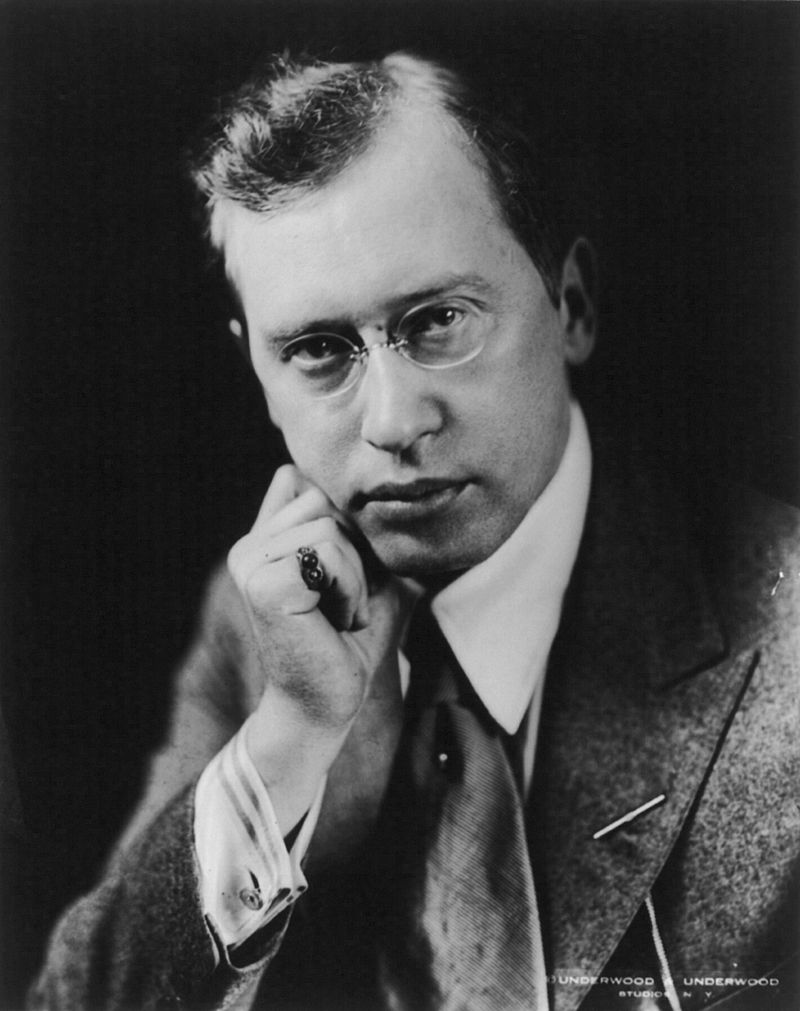 George Sylvester Viereck (December 31, 1884 – March 18, 1962) was a German-American poet, writer, and pro-German propagandist.[1] He published one of the first known homosexual vampire novels, The House of the Vampire, in 1907. Viereck's memoir of life in prison, Men Into Beasts, was published as a paperback original by Fawcett Publications in 1952. The book is a general memoir of discomfort, loss of dignity, and brutality in prison life. The front matter and backcover text focuses on the situational homosexuality and male rape described in the book (witnessed, not experienced, by Viereck). The book, while a memoir, is thus the first original title of 1950s gay pulp fiction, an emerging genre in that decade.

George Viereck was born in the Kingdom of Bavaria, to a German father and American-born mother. The father, Louis, born out of wedlock to German actress Edwina Viereck, was reputed to be a son of Kaiser Wilhelm I. Another relative of the Hohenzollern family assumed legal paternity of the boy. In the 1870s, Louis Viereck joined the Marxist socialist movement.

George Viereck began writing poetry when he was eleven. His heroes were Jesus Christ, Napoleon Bonaparte, and Oscar Wilde. In 1896, Louis Viereck emigrated to the United States; his U.S.-born wife Laura and their twelve-year-old son George followed in 1897.

While still in college, in 1904, George Sylvester Viereck, with the help of literary critic Ludwig Lewisohn, published his first collection of poems.[2] He graduated from the College of the City of New York in 1906. The next year his collection Nineveh and Other Poems (1907) won Viereck national fame. A number were written in the style of the Uranian male love poetry of the time.[3] The Saturday Evening Post called Viereck "the most widely-discussed young literary man in the United States today".[4]

Between 1907 and 1912, Viereck turned into a Germanophile. In 1908, he published the best-selling Confessions of a Barbarian. Viereck lectured at the University of Berlin on American poetry in 1911.[5] For his support of Germany and pacifism, Viereck was expelled from several social clubs and fraternal organizations, and had a falling out with a close friend, poet Blanche Shoemaker Wagstaff.[6][7][8]

During World War I he edited a German-sponsored weekly magazine, The Fatherland with a claimed circulation of 80,000.[9] In August 1918, a lynch mob stormed Viereck's house in Mount Vernon, forcing him to seek refuge in a New York City hotel.[10] In 1919, shortly after the Great War, he was expelled from the Poetry Society of America.[11]

In 1923, Viereck published a popular-science book entitled Rejuvenation: How Steinach Makes People Young, which drew the attention of Sigmund Freud,[12] who wrote Viereck asking if he would write a similar book about psychoanalysis. Viereck traveled to Vienna to interview Freud, and then went to Munich to interview Adolf Hitler.[13] During the mid-1920s, Viereck went on several additional tours of Europe, interviewing Marshal Foch, Georges Clemenceau, George Bernard Shaw, Oswald Spengler, Benito Mussolini, Queen Elisabeth of the Belgians, Henry Ford, Albert Mol, Magnus Hirschfeld, and Albert Einstein.[14] Viereck became close friends with Nikola Tesla.[15] Tesla occasionally attended dinner parties held by Viereck and his wife. He dedicated his poem "Fragments of Olympian Gossip" to Viereck, a work in which Tesla ridiculed the scientific establishment of the day.

Viereck founded two publications, The International (of which the notorious poet and occultist Aleister Crowley was a contributing editor for a time) and The Fatherland, which argued the German cause during World War I. Viereck became a well-known supporter of National Socialism. In 1933, Viereck again met with Hitler, now Germany's leader, in Berlin, and in 1934, he gave a speech to twenty thousand "Friends of the New Germany" at New York's Madison Square Garden, in which he compared Hitler to Franklin D. Roosevelt and told his audience to sympathize with National Socialism without being antisemites. His Jewish friends denounced him as "George Swastika Viereck", but he continued to promote National Socialism.[16]

In 1941, he was indicted in the U.S. for a violation of the Foreign Agents Registration Act when he set up his publishing house, Flanders Hall, in Scotch Plains, New Jersey.[17] He was convicted in 1942 for this failure to register with the U. S. Department of State as a National Socialist agent.[18] He was imprisoned from 1942 to 1947.

His son, Peter Viereck, was a historian, political writer and poet. A 2005 The New Yorker article discusses how the younger Viereck both rejected and was shaped by the ideologies of his father.[20]