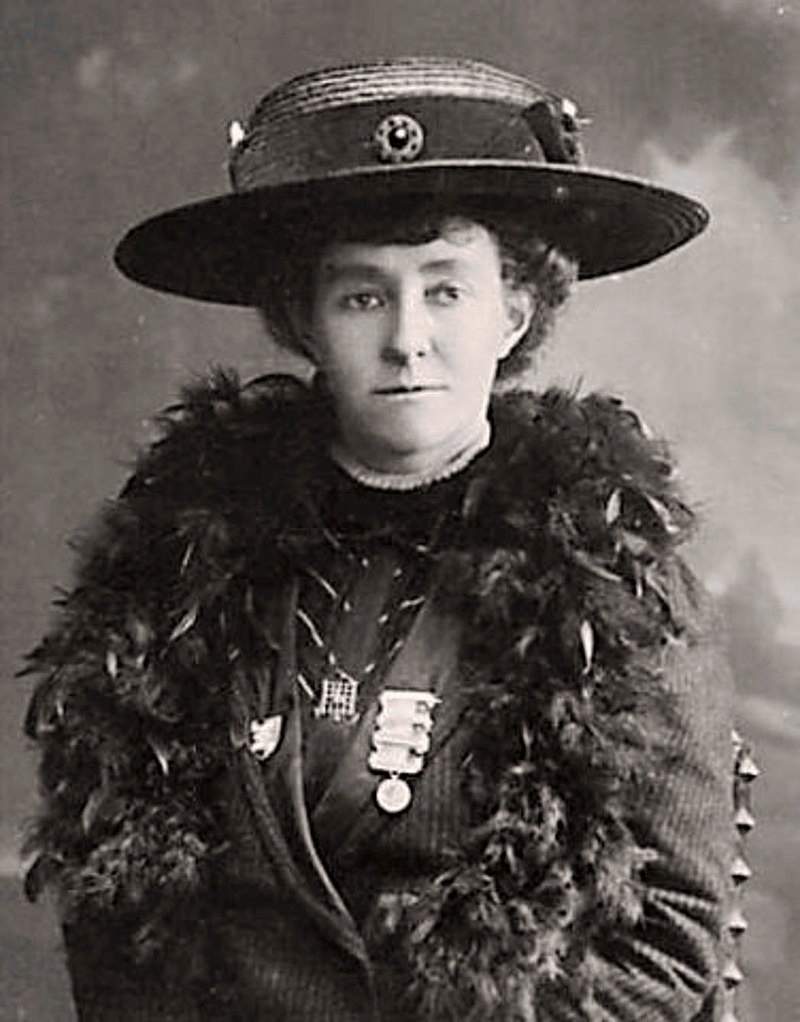 Emily Wilding Davison (11 October 1872 – 8 June 1913) was an English suffragette who fought for votes for women in Britain in the early twentieth century. Her name and picture (and those of 58 other women and men's suffrage supporters) are on the plinth of the statue of Millicent Fawcett in Parliament Square, London, unveiled in 2018.

A member of the Women's Social and Political Union (WSPU) and a militant fighter for her cause, Davison was arrested on nine occasions, went on hunger strike seven times and was force fed on forty-nine occasions. She died after being hit by King George V's horse Anmer at the 1913 Derby when she walked onto the track during the race. Historical information surrounding the events that led to Davison's death have been speculated, in particular the idea that she actually intended to commit suicide, which was false. Actually she wrongly predicted that the horse would stop and at that moment and she could drape the Women's Social and Political Union ribbon on the animal, but it didn't happen that way. Edith Mansell Moullin, who had given Constance Lytton The man-made world to read in prison, was married to Charles Mansell Moullin, a surgeon and supporter of women’s suffrage – it was he who operated (unsuccessfully) on Emily Wilding Davison after she fell under the King’s horse. Maude Royden visited Davison at the hospital where she died.

Women such as Emily Wilding Davison, the militant campaigner who famously stepped in front of the king’s horse at the Epsom Derby and sustained fatal injuries, and her inner circle of female friends, such as Mary Leigh, also a militant feminist campaigner, are obvious subjects for such a debate, but as historian Liz Stanley states, ‘reading and interpreting the nature of this closeness is difficult indeed’, and therefore one should not judge one way or the other beyond saying that they had a strong emotional bond, but that this was perhaps a part of their close political alliance too – comradely as much as romantic. Davison knew of Walt Whitman’s poetry and owned a copy of his work; possibly love between ‘comrades’ would have been an acceptable way for her to show her feelings for other women.

Davison grew up in a middle-class family, and studied at Royal Holloway College, London, and St Hugh's College, Oxford, before taking jobs as a teacher and governess. She joined the WSPU in November 1906 and became an officer of the organisation and a chief steward during marches. She soon became known in the organisation for her daring militant action; her tactics included breaking windows, throwing stones, setting fire to postboxes and, on three occasions, hiding overnight in the Palace of Westminster—including on the night of the 1911 census.

On 14 June 1913 Davison's body was transported from Epsom to London; her coffin was inscribed "Fight on. God will give the victory."[103] Five thousand women formed a procession, followed by hundreds of male supporters, that took the body between Victoria and Kings Cross stations; Charlotte "Charlie" Marsh led the procession that stopped at St George's, Bloomsbury for a brief service[104] led by its vicar and Claude Hinscliff, members of the Church League for Women's Suffrage.[105] The women marched in ranks wearing the suffragette colours of white and purple, which The Manchester Guardian described as having "something of the deliberate brilliance of a military funeral";[104] 50,000 people lined the route.[106] The event, which was organised by Grace Roe,[105] is described by June Purvis, Davison's biographer, as "the last of the great suffragette spectacles".[97] Emmeline Pankhurst planned to be part of the procession, but she was arrested on the morning, ostensibly to be returned to prison under the "Cat and Mouse" Act (1913).[82][104][l] The coffin was taken by train to Newcastle upon Tyne with a suffragette guard of honour for the journey; crowds met the train at its scheduled stops. The coffin remained overnight at the city's central station before being taken to Morpeth. A procession of about a hundred suffragettes accompanied the coffin from the station to the St. Mary the Virgin church; it was watched by thousands. Only a few of the suffragettes entered the churchyard, as the service and interment were private.[104][108] Her gravestone bears the WSPU slogan "Deeds not words".[109]