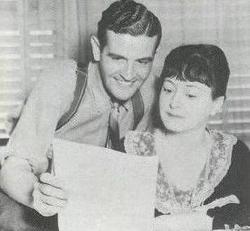 Born in Richmond, Virginia, he was the only child of Harry L. Campbell and Hortense Eichel Campbell. He graduated from the Virginia Military Institute and moved to New York City in the late 1920s. An occasional contributor of prose to ''The New Yorker'', he also acted on the Broadway stage. He met Parker in 1932 and they married two years later in Raton, New Mexico. Like his wife, he was of mixed Scottish and German-Jewish descent.

Campbell, Parker, and their collaborator, Robert Carson, earned an Academy Award nomination for Best Adapted Screenplay for the 1937 version of ''A Star Is Born''. He and Parker also wrote additional dialogue for ''The Little Foxes'' when Lillian Hellman was called away to work on another project.

In 1942 Campbell enlisted in the U.S. Army in Philadelphia. He was commissioned a captain, and served in Army Intelligence in Europe for the duration of World War II. Campbell and Parker divorced in 1947, then remarried in 1950. Although they lived separately from 1952 until 1961, they remained married until Campbell's death.

Campbell died of an apparent suicide on June 14, 1963, in West Hollywood, California. While Parker insisted that he would never have intentionally killed himself, and reported his death as "accidental", he had been drinking all day; capsules of the barbiturate Seconal were found around his bed, and a plastic bag was draped over his neck and shoulders. The coroner's report listed the cause of death as "acute barbiturate poisoning due to an ingestion of overdose".[1] His remains were returned to Richmond for burial and he is buried at Hebrew Cemetery (Richmond, Virginia).[2]