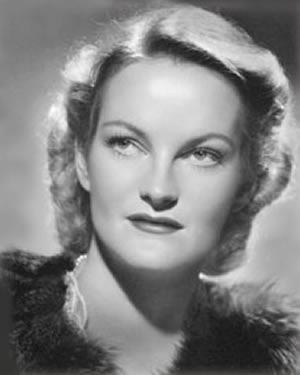 Doris Duke (November 22, 1912 – October 28, 1993) was an American billionaire tobacco heiress, philanthropist, art collector, horticulturalist, and socialite. She was often called "the richest girl in the world".[1] Her great wealth, luxurious lifestyle, and love life attracted significant press coverage, both during her life and after her death.[2] Bernard and Doris (2007) is an HBO film starring Susan Sarandon as Duke, and Ralph Fiennes as the butler Bernard Lafferty.

Duke's passions varied wildly. Briefly a news correspondent in the 1940s, she also played jazz piano and learned to surf competitively. At her father's estate in Hillsborough Township, New Jersey, she created one of America's largest indoor botanical displays. She was also active in preserving more than 80 historic buildings in Newport, Rhode Island. Duke was close friends with former First Lady Jacqueline Kennedy Onassis, and in 1968, when Duke created the Newport Restoration Foundation, Kennedy Onassis was appointed the vice president and championed the foundation. Her philanthropic work in AIDS research, medicine, and child welfare continued into her old age. She also donated funds to support and educate black students in the South who were disadvantaged because of their race.[3] Her estimated $1.3 billion fortune was largely left to charity. Duke's legacy is now administered by the Doris Duke Charitable Foundation, dedicated to medical research, prevention of cruelty to children and animals, the performing arts, wildlife and ecology.

Duke was born in New York City, the only child of tobacco and hydroelectric power tycoon James Buchanan Duke and his second wife, Nanaline Holt Inman, widow of William Patterson Inman.[4] At his death in 1925, the elder Duke's will bequeathed the majority of his estate to his wife and daughter,[5] along with $17 million in two separate clauses of the will, to The Duke Endowment he had created in 1924.[5] The total value of the estate was estimated variously from $60 - $100 million,[6] the majority derived from J.B. Duke's holdings in the American Tobacco Company and the precursor of the Duke Power Company.[7] Duke spent her early childhood at Duke Farms, her father's 2,700-acre (11 km2) estate in Hillsborough Township, New Jersey.[8] Due to ambiguity in James Duke's will, a lawsuit was filed in 1927 to prevent auctions and outright sales of real estate he had owned; in effect, Doris Duke successfully sued her mother and other executors to prevent the sales.[8][9] One of the pieces of real estate in question was a Manhattan mansion at 1 East 78th Street[8] which later became the home of the Institute of Fine Arts at New York University.

When she turned 18, in 1930, the 6 feet 0 inches (1.83 m)[10] tall Duke was presented to society as a debutante, at a ball at Rough Point, the family residence in Newport, Rhode Island.[11] She received large bequests from her father's will when she turned 21, 25, and 30; she was sometimes referred to as the "world's richest girl."[12][13] Her mother died in 1962, leaving her jewelry and a coat.[14] When Duke came of age, she used her wealth to pursue a variety of interests, including extensive world travel and the arts.[15] She studied singing with Estelle Liebling, the voice teacher of Beverly Sills, in New York City.[16] During World War II, she worked in a canteen for sailors in Egypt, taking a salary of one dollar a year.[15] She spoke French fluently.[17] In 1945, Duke began a short-lived career as a foreign correspondent for the International News Service, reporting from different cities across the war-ravaged Europe. After the war, she moved to Paris and wrote for the magazine Harper's Bazaar. While living in Hawaii, Duke became the first non-Hawaiian woman to take up competitive surfing under the tutelage of surfing champion and Olympic swimmer Duke Kahanamoku and his brothers.[18] A lover of animals, in particular her dogs and pet camels, in her later years Duke became a wildlife refuge supporter. Duke's interest in horticulture led to a friendship with Pulitzer Prize-winning author and scientific farmer Louis Bromfield, who operated Malabar Farm, his country home in Lucas, Ohio in Richland County. Today, his farm is part of Malabar Farm State Park, made possible by a donation from Duke that helped purchase the property after Bromfield's death. A section of woods there is dedicated to her and bears her name. At age 46, Duke started to create Duke Gardens, an exotic public-display garden, to honor her father James Buchanan Duke.[19] She extended new greenhouses from the Horace Trumbauer conservatory[20] at her home in Duke Farms, New Jersey.[21] Each of the eleven interconnected gardens was a full-scale re-creation of a garden theme, country or period, inspired by DuPont's Longwood Gardens. She designed the architectural, artistic and botanical elements of the displays based on observations from her extensive international travels.[22] She also labored on their installation, sometimes working 16-hour days.[15] Display construction began in 1958.[23] Duke had learned to play the piano at an early age and developed a lifelong appreciation of jazz and befriended jazz musicians. She also liked gospel music and sang in a gospel choir. Duke cultivated an extensive art collection, principally of Islamic and Southeast Asian art. In 2014, sixty objects from her collection (including ceramics, textiles, paintings, tile panels, and full-scale architectural elements) were displayed temporarily at the University of Michigan Museum of Art in the exhibition "Doris Duke's Shangri La: Architecture, Landscape, and Islamic Art,"[24] organized by the Doris Duke Foundation for Islamic Art.[24] The collection is on public display at her former home in Honolulu, Hawaii, now the Museum of Islamic Art, Culture, & Design.[25][26]

Duke acquired a number of homes. Her principal residence and official domicile[27] was Duke Farms, her father's 2,700 acre (11 km2) estate in Hillsborough Township, New Jersey. Here she created Duke Gardens, a 60,000-square-foot (5,600 m2) public indoor botanical display that was among the largest in America.[28] Duke's other residences were private during her lifetime: she spent summer weekends working on her Newport Restoration Foundation projects while staying at Rough Point, the 49-room English manor-style mansion that she inherited in Newport, Rhode Island.[29] Winters were spent at an estate she built in the 1930s and named "Shangri La" in Honolulu, Hawaii;[30] and at "Falcon Lair" in Beverly Hills, California,[31] once the home of Rudolph Valentino. She also maintained two apartments in Manhattan: a nine-room penthouse with a 1,000-square-foot (93 m2) veranda at 475 Park Avenue that was later owned by journalist Cindy Adams;[32] and another apartment near Times Square that she used exclusively as an office for the management of her financial affairs. She purchased her own Boeing 737 jet and redecorated the interior to travel between homes and on her trips to collect art and plants. The plane included a bedroom decorated to resemble a bedroom in a real house. Doris Duke had difficulty remaining in one place, and whenever she arrived somewhere, she had the desire to go somewhere else.[33] Duke was a hands-on homeowner, climbing a ladder to a three-story scaffolding to clean tile murals in the courtyard of Shangri La,[34] and working side by side with her gardeners at Duke Farms. Three of Duke's residences are currently managed by subsidiaries of the Doris Duke Charitable Foundation and allow limited public access. Duke Farms in New Jersey is managed by the Duke Farms Foundation; a video tour of the former Duke Gardens is available. Rough Point was deeded to the Newport Restoration Foundation in 1999 and opened to the public in 2000. Tours are limited to 12 people. Shangri-La is operated by the Doris Duke Foundation for Islamic Art; small personal tours and an online virtual tour are available.[35]

Duke married twice, the first time in 1935 to James H. R. Cromwell, the son of Eva Stotesbury and stepson of wealthy financier Edward T. Stotesbury.[40] Cromwell, a New Deal advocate like his wife, used her fortune to finance his political career. In 1940 he served several months as U.S. Ambassador to Canada and ran unsuccessfully for the U.S. Senate. The couple had a daughter, Arden, who was born prematurely on July 13, 1940, in Hawaii and died on the following day.[41][42][43] They divorced in 1943.[44] In 1988 Duke adopted 32-year-old Chandi Heffner in Hawaii.[45] On September 1, 1947, while in Paris, Duke became the third wife of Porfirio Rubirosa (Rubirosa's fourth wife was Barbara Hutton), a diplomat from the Dominican Republic. She reportedly paid his second wife, actress Danielle Darrieux, $1 million to agree to an uncontested divorce. Because of her great wealth, Duke's marriage to Rubirosa attracted the attention of the U.S. State Department, which cautioned her against using her money to promote a political agenda. Further, there was concern that in the event of her death, a foreign government could gain too much leverage. Therefore, Rubirosa had to sign a pre-nuptial agreement. During the marriage though, she gave Rubirosa several million dollars in gifts, including a stable of polo ponies, sports cars, a converted B-25 bomber, and, in the divorce settlement, a 17th-century house in Paris.[46] She reportedly had numerous affairs, with, among others, Duke Kahanamoku, Errol Flynn, Alec Cunningham-Reid, General George S. Patton, Joe Castro and Louis Bromfield.[43][30][47][48][18] Duke posted a bail of $5,000,000 for her friend, former Philippine First Lady Imelda Marcos after the latter was arrested for racketeering.[49]

In 1992, at the age of 79, Duke had a facelift. She began trying to walk while she was still heavily medicated and fell, breaking her hip. In January 1993, she underwent surgery for a knee replacement. She was hospitalized from February 2 to April 15. She underwent a second knee surgery in July of that year. A day after returning home from this second surgery, she suffered a severe stroke. Doris Duke died at her Falcon's Lair home on October 28, 1993, at the age of 80. The cause was progressive pulmonary edema resulting in cardiac arrest, according to a spokesman.[27][15] Duke was cremated 24 hours after her death and her executor, Bernard Lafferty, scattered her ashes into the Pacific Ocean as her last will specified.[27] Rumors and accusations swirled after Duke's death, ranging from suicide to murder, and controversy was exacerbated by Duke's habit of regularly changing her last will and testament, but no court case was ever filed in the case.[50]