Dora de Houghton Carrington (29 March 1893 – 11 March 1932), known generally as Carrington, was a British painter and decorative artist, remembered in part for her association with members of the Bloomsbury Group, especially the writer Lytton Strachey. She has been romantically linked to Lady Ottoline Morrell, Henrietta Bingham.

The daughter of a Liverpool merchant, she was born in Hereford, England, and attended the all-girls' Bedford High School which emphasized art. Her parents also paid for her to receive extra lessons in drawing. In 1910, she went to the Slade School of Art at University College, London where she subsequently won a scholarship; her fellow students included Dorothy Brett, Paul Nash, Christopher R. W. Nevinson and Mark Gertler. All at one time or another were in love with her, as was Nash's younger brother John Nash, who hoped to marry her.[1][2] Gertler pursued Carrington for a number of years, and they had a brief sexual relationship during the years of the First World War.[3] 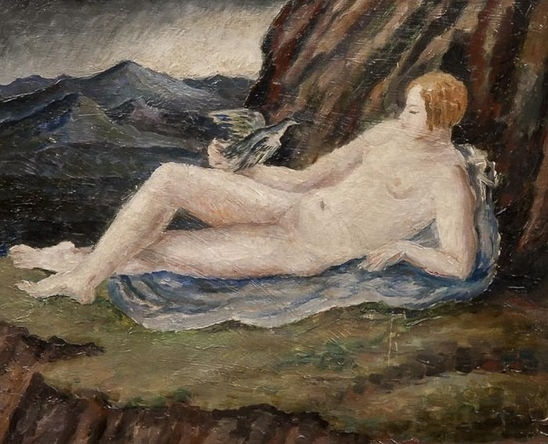 Reclinging nude with dove in a mountainous landscape (Portrait of Henrietta Bingham), by Dora Carrington

From her time at the Slade onwards, she was commonly known simply by her surname. She was not well known as a painter during her lifetime, as she rarely exhibited and did not sign her work. She worked for a while at the Omega Workshops, and for the Hogarth Press, designing woodcuts.[4]

Carrington was not a member of the Bloomsbury Group, though she was closely associated with Bloomsbury and, more generally, with "Bohemian" attitudes, through her long relationship with the homosexual writer Lytton Strachey, whom she first met in 1916. Distinguished by her cropped pageboy hair style (before it was fashionable) and somewhat androgynous appearance, she was troubled by her sexuality; she is known to have had an affair with Henrietta Bingham. She also had a significant relationship with the writer Gerald Brenan. In his first novel Crome Yellow, Aldous Huxley based the character of Mary Bracegirdle on Carrington, and described how she and he slept on the roof of "Lollipop Hall", based on Lady Ottoline Morrell's home. He chose the name "Bracegirdle" because of Dora's chastity.[5]

In June 1918, Virginia Woolf wrote of Carrington in her diary: "She is odd from her mixture of impulse & self consciousness. I wonder sometimes what she’s at: so eager to please, conciliatory, restless, & active.... [B]ut she is such a bustling eager creature, so red & solid, & at the same time inquisitive, that one can’t help liking her."[6] Carrington first set up house with Lytton Strachey in November 1917, when they moved together to Tidmarsh Mill House, near Pangbourne, Berkshire. Carrington met Ralph Partridge, an Oxford friend of her younger brother Noel, in 1918. Partridge fell in love with Carrington and eventually, in 1921, Carrington agreed to marry him, not for love but to hold the menage a trois together.[7] Strachey paid for the wedding, and also accompanied the couple on their honeymoon in Venice. The three moved to Ham Spray House in Wiltshire in 1924; the house had been purchased by Strachey in the name of Partridge.[8]

In 1926, Ralph Partridge began an affair with Frances Marshall, and left to live with her in London. His marriage to Carrington was effectively over, but he continued to visit her most weekends. In 1928 Carrington met Bernard ‘Beakus’ Penrose, a friend of Partridge’s and the younger brother of the artist Roland Penrose, and began an affair with him. The affair energized Carrington's artistic creativity, and she also collaborated with Penrose on the making of three films. However, Penrose wanted Carrington exclusively for himself, a commitment she refused to make because of her love for Strachey. The affair, her last with a man, ended when Carrington became pregnant and had an abortion.

During her lifetime, Carrington's work received no critical attention. The lack of encouragement may have kept her from displaying her artwork. Carrington's work can be described as progressive, because it did not fit into the mainstream of art in England at the time. In fact, her work was not considered art at all. It featured Victorian-style pictures which were made from coloured tinfoil and paper. Carrington included pen sketches in letters to her friends, with the intention of entertaining them. She also created woodblock prints, which were highly regarded. Her lesser-known work included painted pub signs and murals, ceramics, fireplaces, and tin trunks.

Carrington was better known for her landscape paintings, which have been linked to surrealism. Her landscapes blend the facts of visual perception with interior desires and fantasies. One work of art, Mountain Ranges from Yegen, Andalusia, 1924, shows the split in perspectives. There is an intimate foreground, and there is in the distance a view of the mountains. The main focus, on the middle mountains, exhibit the texture of human skin. This merges the notion of the personal being made public.[9]

Lytton Strachey died of stomach cancer at Ham Spray in January 1932. Carrington, who saw no purpose in a life without Strachey, committed suicide two months after his death by shooting herself with a gun borrowed from her friend, Hon. Bryan Guinness (later 2nd Baron Moyne).[10] Her body was cremated and the ashes buried under the laurels in the garden of Ham Spray House.[11]

An accomplished painter of both portraits and landscape, she also worked in applied and decorative arts, painting on any type of surface she had at hand including inn signs, tiles and furniture. She also decorated pottery and designed the library at Ham Spray. In 1970 David Garnett published a selection of letters and extracts from her diary, since which time critical and popular appreciation of her work has risen sharply.[12] In 1978, Sir John Rothenstein, for nearly thirty years Director of the Tate Gallery, London, called Dora Carrington "the most neglected serious painter of her time."[13] "That is no longer the case. In 1995 she was the subject of a major retrospective exhibition at the Barbican Art Gallery in London."[14] Two of her works are in the Tate Gallery, London.[15]

Carrington's life with Strachey was dramatized in the 1995 biographical film Carrington, starring Emma Thompson in the title role.

For many years, Carrington’s art was neglected by the public and her main notoriety was due to her relationship with Lytton Strachey. On the day she agreed to marry Partridge she wrote to Strachey, who was in Italy, what has been described as "one of the most moving love letters in the English language".[16] She wrote "... I cried last night Lytton, whilst he slept by my side sleeping happily—I cried to think of a savage cynical fate which had made it impossible for my love ever to be used by you ..." Strachey wrote back "... you do know very well that I love you as something more than a friend, you angelic creature, whose goodness to me has made me happy for years, and whose presence in my life has been and always will be, one of the most important things in my life ..."[17] On his deathbed Strachey said, "I always wanted to marry Carrington and I never did." His biographer calls this sentiment "not true; but he could not have said anything more deeply consoling".[18] Upon his death, Strachey left Carrington £10,000 (the equivalent of £240,000 in 1994).[19]