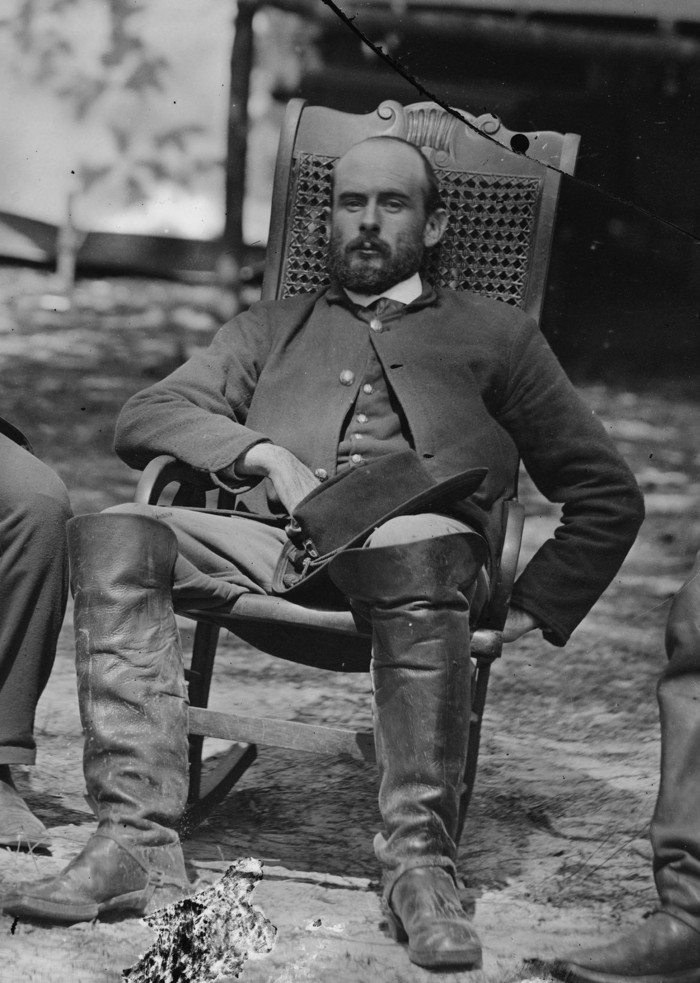 Charles Francis Adams Jr. (May 27, 1835 – March 20, 1915) was an American author and historian. He was a member of the prominent Adams family, and son of Charles Francis Adams Sr. He served as a colonel in the Union Army during the American Civil War. After the war, he was a railroad regulator and executive, an author of historical works, and a member of the Massachusetts Park Commission. As secretary of the Massachusetts commissions to the Vienna exposition in 1873, Francis Davis Millet formed a friendship with the American Charles Francis Adams, and then traveled through Turkey, Romania, Greece, Hungary, and Italy, finally settling in Venice to paint.

Adams was born in Boston, May 27, 1835,[1] into a family with a long legacy in American public life. He was the great-grandson of United States President John Adams, and the grandson of president John Quincy Adams. His father Charles Francis Adams Sr.[2] was a lawyer, politician, diplomat, and writer. His siblings included: older sister Louisa Catherine Adams, wife of Charles Kuhn, of Philadelphia; older brother Hon. John Quincy Adams II, father of Charles Francis Adams III; historian Henry Brooks Adams;[3] Arthur Adams, who died young during their childhood; Mary Adams, who married Henry Parker Quincy, of Dedham, Massachusetts; and historian Peter Chardon Brooks Adams, of Beverly Farms, Massachusetts. who married Evelyn Davis.[4] Adams graduated from Harvard University in 1856,[5] and then studied law in the office of Richard H. Dana, Jr., and was admitted to the bar in 1858.[1] Later, in 1895, he received the degree LL.D. from Harvard.[1]

Adams served in the Union Army during the American Civil War. He was commissioned as a first lieutenant in the 1st Massachusetts Volunteer Cavalry on December 28, 1861. He was promoted to captain on December 1, 1862. He fought with distinction during the Gettysburg Campaign, where his company was heavily engaged at the Battle of Aldie. When the regiment's 3-years enlistment ended it was reduced to a battalion; and Adams was mustered out of service on September 1, 1864.[6][5] On September 8, 1864, he was commissioned as the lieutenant colonel of the 5th Massachusetts Cavalry (officially designated "5th Massachusetts Colored Volunteer Cavalry"). He was promoted to colonel and assumed command of the regiment on March 14, 1865, shortly before the end of the war.[7][8][5] When he assumed command, the regiment was assigned guarding Confederate prisoners of war at Point Lookout, Maryland. Adams, who wished to lead his regiment in combat, was able to get horses for his regiment and had it reassigned to front line duty during the closing days of the campaign against Richmond. Adams wrote in his autobiography that he regretted having his unit reassigned since he came to the conclusion that the regiment's black soldiers were ill-suited for combat duty. He led his regiment into Richmond shortly after it was captured in April 1865. Adams returned to Massachusetts in May due to illness (probably dysentery) and resigned from the Army on August 1, 1865.[5] On July 9, 1866, President Andrew Johnson nominated Colonel Adams for the award of the rank of brevet (honorary) brigadier general, United States Volunteers, "for distinguished gallantry and efficiency at the battles of Secessionville, South Carolina and South Mountain and Antietam, Maryland, and for meritorious services during the war" to rank from March 13, 1865, and the U. S. Senate confirmed the award on July 23, 1866.[9][10] Adams was a Veteran Companion of the Massachusetts Commandery of the Military Order of the Loyal Legion of the United States (MOLLUS).

Following the Civil War, he was appointed to the Massachusetts Railroad Commission. There he attempted to persuade (rather than coerce) railroads into compliance with accepted business norms. Thomas McCraw called Adams's approach to regulation "the Sunshine Commission" since the purpose of the commission was to expose the corrupt business practices in hopes that, once out in the open, the businessmen would be shamed into mending their ways. It was in this vein that he wrote Chapters of Erie. However, true to his regulatory philosophy, he favored the protection of businessmen over that of the consumers. He saw regulation as necessary to protect investors and other businessmen from the capriciousness of a hostile public or the machinations of other unscrupulous stock jobbers.[11]

Congress distrusted the Union Pacific Railroad (UP) and in 1884 forced it to hire Adams as the new president.[12] Adams had long promoted various reform ideas, as in his book Railroads, Their Origin and Problems (1878), but he had little practical experience in management. As railroad president, he was successful in getting a good press for the UP, and set up libraries along the route to allow his employees to better themselves. He had poor results dealing with the Knights of Labor. When the union refused extra work in Wyoming in 1885, Adams hired Chinese workers. The result was the Rock Springs massacre, which killed scores of Chinese and drove all the rest out of Wyoming.[13] He tried to build a complex network of alliances with other businesses, but they provided little help to the UP. He had great difficulty in making decisions and in co-ordinating his subordinates. Adams was unable to stanch the worsening financial condition of the UP, and in 1890 the railroad's owner Jay Gould forced his resignation.[14][15]

Adams was elected a Fellow of the American Academy of Arts and Sciences in 1871[16] and a member of the American Antiquarian Society in 1891.[17] After 1874, he devoted much of his time to the study of American history. In recognition of his work, Adams became vice-president of the Massachusetts Historical Society in 1890, he was chosen president of this society in 1895 and the American Historical Association in 1901.[1] His writings and addresses on problems of railway management and other historical subjects frequently gave rise to widespread controversy.[8] In 1875, he published an essay on "The Granger Movement" in the North American Review which exposes the railroad rate rigging and monopoly practices which prompted the movement. Adams also wrote an autobiography, completed in 1912 and published posthumously in 1916. At the beginning of the autobiography is a memorial address about Adams written by Henry Cabot Lodge.

From 1893 to 1895, he was chairman of the Massachusetts Park Commission, and as such took a prominent part in planning the present park system of the state.[8] He was influential in establishing the Blue Hills Reservation and the Middlesex Fells Reservation.

In 1900, he wrote a letter to the President of the Massachusetts Single Tax League, declaring himself a supporter of the reform Henry George had proposed, which would later be known as Georgism. An excerpt of that letter appeared in The Outlook, December 15, 1900.

Adams represented the public on the board of arbitration in the industrial department of the National Civic Confederation in New York city, December 17, 1901.[1]