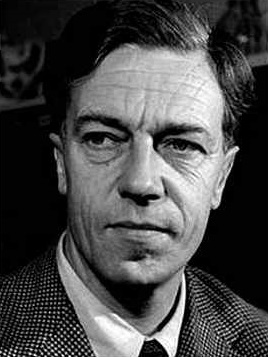 Cecil Day-Lewis (or Day Lewis) CBE (27 April 1904 – 22 May 1972), often written as C. Day-Lewis, was an Anglo-Irish poet and Poet Laureate from 1968 until his death in 1972. He also wrote mystery stories under the pseudonym of Nicholas Blake. Nigel Strangeways in Nicholas Blake's detective novels is part inspired by W.H. Auden. During World War II, Day-Lewis worked as a publications editor in the Ministry of Information for the UK government, and also served in the Musbury branch of the British Home Guard.[1] He is the father of actor Sir Daniel Day-Lewis, and documentary filmmaker and television chef Tamasin Day-Lewis.

Day-Lewis was born in 1904 in Ballintubbert, Athy/Stradbally border, Queen's County (now known as County Laois), Ireland.[2] He was the son of Frank Day-Lewis, a Church of Ireland rector of that parish, and Kathleen Blake Squires (died 1906).[3] Some of his family were from England (Hertfordshire and Canterbury). His father took the surname "Day-Lewis" as a combination of his own birth father's ("Day") and adoptive father's ("Lewis") surnames.[4] In his autobiography The Buried Day (1960), Day-Lewis wrote, "As a writer I do not use the hyphen in my surname – a piece of inverted snobbery which has produced rather mixed results".[5] After the death of his mother in 1906, when he was two years old, Cecil was brought up in London by his father, with the help of an aunt, spending summer holidays with relatives in County Wexford. He was educated at Sherborne School and at Wadham College, Oxford. In Oxford, Day-Lewis became part of the circle gathered around W.H. Auden and helped him to edit Oxford Poetry 1927. His first collection of poems, Beechen Vigil, appeared in 1925.[7] In 1928 Day-Lewis married Constance Mary King, the daughter of a Sherborne teacher. Day-Lewis worked as a schoolmaster in three schools, including Larchfield School, Helensburgh, Scotland (now Lomond School).[7][8]

In 1935, Day-Lewis decided to increase his income from poetry by writing a detective novel, A Question of Proof under the pseudonym Nicholas Blake. He created Nigel Strangeways, an amateur investigator and gentleman detective who, as the nephew of an Assistant Commissioner at Scotland Yard, has the same access to, and good relations with, official crime investigation bodies as those enjoyed by other fictional sleuths such as Ellery Queen, Philo Vance and Lord Peter Wimsey.[16] He published nineteen more crime novels. (In the first Nigel Strangeways novel, the detective is modelled on W.H. Auden, but Day-Lewis developed the character as a far less extravagant and more serious figure in later novels.)[7] From the mid-1930s Day-Lewis was able to earn his living by writing.[7] Four of the Blake novels – A Tangled Web, Penknife in My Heart, The Deadly Joker, The Private Wound – do not feature Strangeways. Minute for Murder is set against the background of Day-Lewis's Second World War experiences in the Ministry of Information. Head of a Traveller features as a principal character a well-known poet, frustrated and suffering writer's block, whose best poetic days are long behind him. Readers and critics have speculated whether the author is describing himself, one of his colleagues, or has entirely invented the character.

During the 1940s he had a long and troubled love affair with the novelist Rosamond Lehmann. His first marriage was dissolved in 1951, and he married actress Jill Balcon, daughter of Michael Balcon. During the Second World War he worked as a publications editor in the Ministry of Information, an institution satirised by George Orwell in his dystopian Nineteen Eighty-Four, but equally based on Orwell's experience of the BBC. During the Second World War his work was now no longer so influenced by Auden and he was developing a more traditional style of lyricism. Some critics believe that he reached his full stature as a poet in Word Over All (1943), when he finally distanced himself from Auden.[9] After the war he joined the publisher Chatto & Windus as a director and senior editor. In 1946, Day-Lewis was a lecturer at Cambridge University, publishing his lectures in The Poetic Image (1947). Day-Lewis was made a Commander of the Most Excellent Order of the British Empire by George VI in his 1950 Birthday Honours.[10] He later taught poetry at Oxford, where he was Professor of Poetry from 1951 to 1956.[7] During 1962–1963, he was the Norton Professor at Harvard University. Day-Lewis was appointed Poet Laureate in 1968, in succession to John Masefield.[11] Day-Lewis was chairman of the Arts Council Literature Panel, vice-president of the Royal Society of Literature, an Honorary Member of the American Academy of Arts and Letters, a Member of the Irish Academy of Letters and a Professor of Rhetoric at Gresham College, London. Cecil Day-Lewis died from pancreatic cancer on 22 May 1972, aged 68, at Lemmons, the Hertfordshire home of Kingsley Amis and Elizabeth Jane Howard, where he and his family were staying. As a great admirer of Thomas Hardy, he arranged to be buried near the author's grave at St Michael's Church in Stinsford, Dorset.[7] Day-Lewis fathered four children.[12] His first two children, with Constance Mary King, were Sean Day-Lewis, a TV critic and writer, and Nicholas Day-Lewis, who became an engineer. His children with Balcon were Tamasin Day-Lewis, a television chef and food critic, and Daniel Day-Lewis, who became an award-winning actor.[13] Sean Day-Lewis published a biography of his father, C. Day Lewis: An English Literary Life (1980). Daniel Day-Lewis donated his father's archive to the Bodleian Library.[14][15]